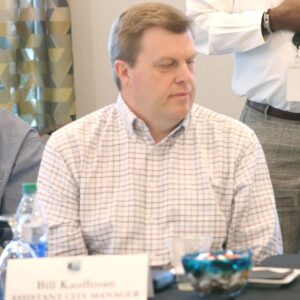 After working for the City of Ocala for seven years, Chief Financial Officer and Assistant City Manager Bill Kauffman put in notice of his intention to retire.

“I evaluated my current situation and decided it was a good time to retire. I’m leaving the city’s financial records in better shape then I found them and after probably the cleanest audit the city has ever had. Now it’s time to enjoy the next chapter in my life which includes spending more quality time with my family,” Kauffman said.

Prior to working at the city, Kauffman worked for the county for eight years.

Speaking of working with city manager, Sandra Wilson, who was terminated last night by the city council without notice, Kauffman only had praise.

“She’s a professional,” he said. “She’ll do well in whatever she chooses to do next.”

Kaufman expressed excitement about the next chapter in his life, but admitted it was bittersweet leaving his employment with the city.

“I’ll miss my coworkers. I really enjoyed working on projects with them,” Kauffman said.