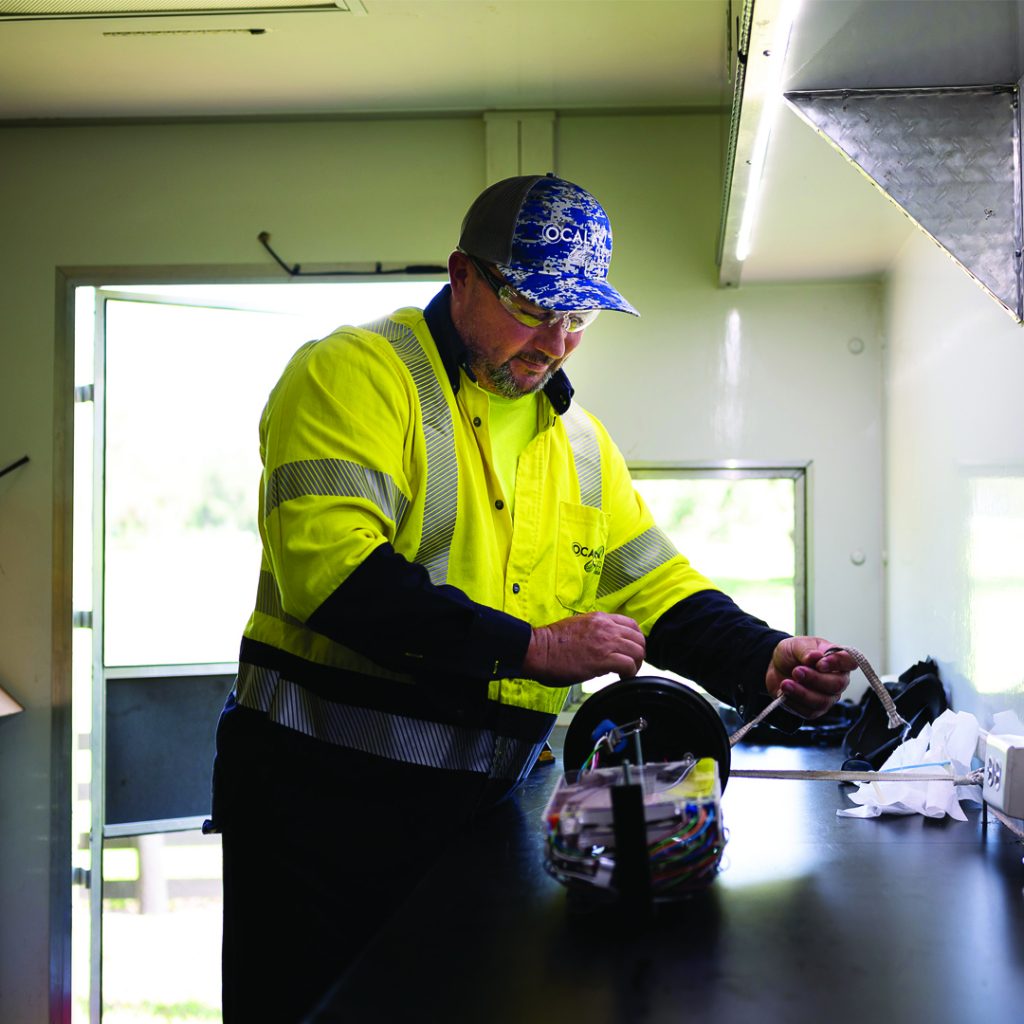 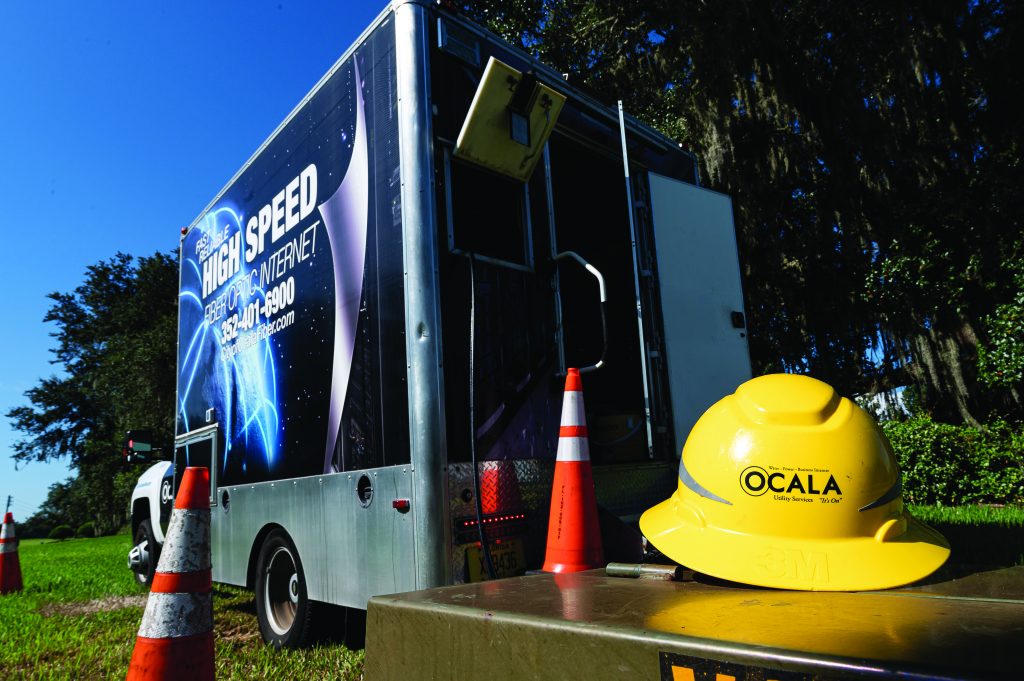 If it seems more crews from Ocala’s fiber-optic service are making the rounds, that’s because they are.

The city’s broadband service, Ocala Fiber Network, or OFN, is experiencing a boom – albeit a very quiet one.

And that’s fine with OFN Director Mel Poole, who insists that the service, despite its growing popularity, not get ahead of itself.

“Slow and methodical. You’ll hear me say that a lot,” said Poole. “It takes time to build out the infrastructure, and people get frustrated, saying ‘Why are you advertising it when you can’t get it to me?’”

“Just because you build it doesn’t mean they’ll come. But if you do build it, you just give it time.”

Despite the low-key approach, city residents and business owners are turning on to OFN.

The department’s revenues, customer base, staff, miles of fiber and “profit” all are up substantially in recent years, according to city financial records.

Poole, a retired U.S. Air Force veteran whose career with the city began with Ocala Electric Utility, took over the department in 2014.

In 2015, his first full year on the job, the OFN claimed 693 customers over a network covering 440 miles, and served by just seven employees. The department reaped $3.1 million in revenue, and cleared roughly $628,000 after expenses.

For fiscal year 2019, the department had tripled in size to 20 staffers, who now serve 1,597 customers. The network now spans 781 miles, and last year, the department raked in nearly $6.8 million, generating almost $2.5 million in profit, which was up 80 percent over the prior year.

And the best part: OFN is not funded by taxpayers.

“There are no tax dollars associated (with OFN). We operate just like a business,” Poole said. “Some customers thought that we were part of the general fund, which meant their tax dollars were paying for us. But we’re strictly an enterprise fund.”

In government, enterprise funds are agencies designed to be self-supporting through fees or other charges.

But keeping with the business model, Poole said he believes customers are responding to market factors.

The city, he said, offers residents and businesses fiber optic at a less expensive price than the “incumbents” – the other local telecom providers – that still utilize copper wire, which is slower and less reliable than fiber.

One drawback is that the city limits its service. It sticks strictly to broadband, with no packages for television or phone service.

BroadbandNow, a group that advocates expanding high-speed internet service for consumers, notes that Ocala is among 331 cities across America offering broadband.

Considering whether cities should compete in the local broadband market, the group breaks down the country into two categories: states with no or moderate barriers to municipal broadband service and those with tougher or substantive restrictions.

In a May 2020 update to its annual survey of the issue, BroadbandNow reported that “states that have no municipal restrictions versus those that do … have lower internet prices on average.” 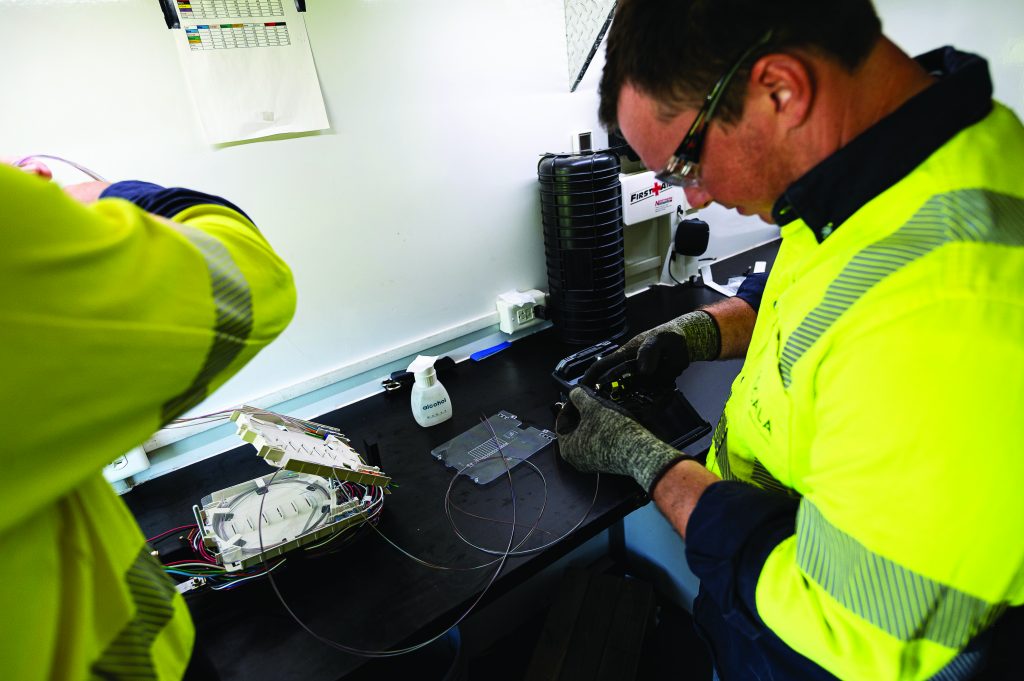 The group also determined that residents in no- or low-barrier states have greater access to “low-price” broadband service, which it defines as $60 a month or less. Ocala charges $60 a month.

Florida is among states that have fewer barriers. But those it does impose are weighty.

Under Florida law, according to BroadbandNow, municipal broadband utilities are charged property taxes. Given the amount of equipment that’s involved in launching a network, as well as a requirement for officials to explain publicly how they can reach profitability within four years, those mandates render “nearly any municipal broadband proposal unfeasible,” BroadbandNow argues.

Yet BroadbandNow points out that Ocala, which has operated its network for decades, is one of “only two municipalities (in Florida that) have successfully deployed broadband services to residents.” The other is Bartow.

An article last month in a publication called Government Technology noted that Ocala Electric laid the foundation for OFN’s high-speed internet service in 1995 when it replaced its network’s copper wire with fiber optic cable. (The article was sponsored by Alcatel-Lucent Enterprise, or ALE, which supplies some of OFN’s equipment.)

The piece also pointed out that the City Council spurred OFN along by allowing the agency to bid on a contract to furnish fiber to the school district.

OFN won the $1.3 million contract in April 2017, with options for four annual renewals, and ran 48 miles of cable. Poole says his team serves all schools but one, Reddick-Collier Elementary, which has a different provider.

“When you add COVID-19 and online learning to the equation, there’s virtually no way any school district in any area could deliver education without such service. We’re grateful to have this service.”

According to the ALE article, that deal with the School Board opened the door for OFN’s expansion.

Beyond residential customers and businesses, the network serves public safety agencies, libraries, hospitals and medical offices and the courthouse. It also provides free Wi-Fi in city parks and over a 10-block zone in downtown. And the city’s water and smartphone-friendly parking meters, public safety cameras and traffic light system also rely on OFN.

City Council President Jay Musleh called the decision to move forward with OFN “an opportunity to invest in our community.”

“When a municipality can provide highly reliable internet services, and offer a comparable product at a cost-effective rate, it becomes a benefit to our residents and an incentive for businesses to locate here,” Musleh said in an email.

OFN’s reach, he added, “has steadily increased over the years, and we feel positive that trend will continue. We are proud to be providing fiber services to all Marion County Public Schools, including the installation of free Wi-Fi access points in school parking lots during the COVID-19 shut down to assist students as they transitioned to distance learning. We continue to expand into targeted neighborhoods and, as customers see the reliability and quality of their service, we hope to exceed initial projections and exceed our customers’ expectations.”

Poole said the deal with the schools, beyond being the catalyst for OFN’s growth, has allowed the utility to give back.

OFN has made grants to the Boys and Girls Club of Marion County, and the Institute for Human and Machine Cognition, which promotes education initiatives in science, technology, engineering and math, or STEM. 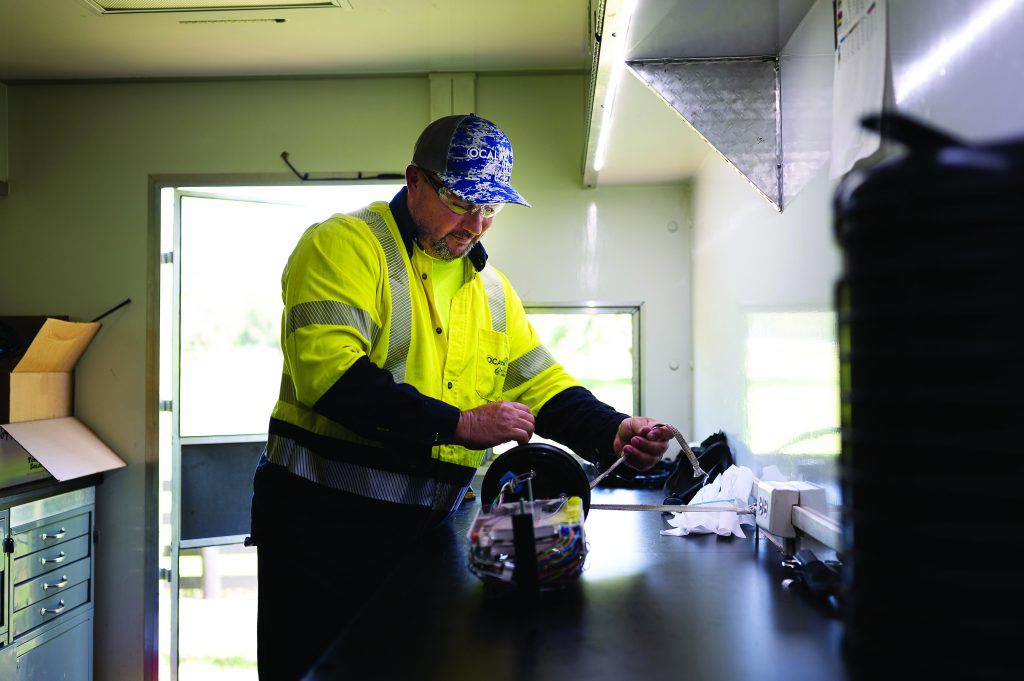 According to Christian, the agency also serves as the business partner for three public schools: Lake Weir Middle, North Marion Middle and Marion Oaks Elementary. Each receives $3,000 from the agency.

Poole said he chose those schools because they lacked a business partner. He hopes to double the number in the near future.

Poole said he envisions keeping OFN on its current trajectory for both customers and revenue.

His long-range plan adds 240 new customers a year over the next few years. COVID-19 might affect that, he acknowledged. In fact, he considered 96 customers might be a better target.

Besides the virus, one challenge facing OFN is informing potential customers about the service itself – and ensuring people understand it is broadband only.

“Fiber is here to stay in so, so many different ways,” said Poole. “We are open for business.”