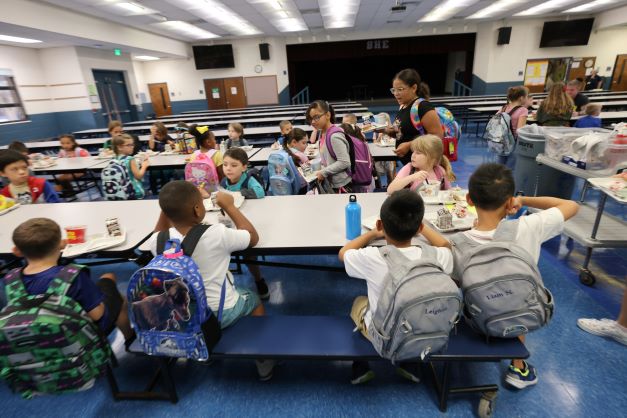 File photo: Students eat their breakfast in the cafeteria on the first day of school at Shady Hill Elementary in Ocala, Fla. on Wednesday, August 10, 2022. [Bruce Ackerman/Ocala Gazette] 2022.

Marion County voters in November must decide for the third time in recent years whether to approve a referendum adding one mill to their property tax rate to generate vital additional dollars to the Marion County Public Schools’ budget.

In 2014, and again in 2018, voters first approved and then renewed a one-mill property tax increase via a referendum. If it is not supported this time, the tax referendum will expire in 2023. If passed, it will continue into 2027.

The one-mill tax increase initially provided $15.9 million to the school district’s budget. Due to increased property values and a larger tax base, this year the revenue will total almost $28 million.

In 2018, projects to improve school safety were added to that list.

Since 2014, local school officials have dealt with an ever-changing set of rules and needs – leaving it challenged on how to meet the increased needs brought on by the numbers of newcomers moving into our community, maintenance to aging facilities, and increasing costs.

In 2018, 72% of Marion County voters supported renewing the tax. But this time, the referendum is facing some headwinds.

Some opponents point to the district’s $900 million 2022-23 budget, almost double the budget the district had in 2014. School leaders, they say, have enough money.

However, that argument lacks context.

The 2022-23 budget includes state and federal money from a number of one-time relief funds: Governor’s Emergency Education Relief (GEER); the Elementary and Secondary School Emergency (ESSER); and Coronavirus Aid, Relief, and Economic Security Act (CARES) to the tune of $145 million.

These nonrecurring funds were necessary to meet the special challenges faced by school districts across the country because of the COVID-19 pandemic. The emergency required additional resources to meet the huge, unexpected needs that came at a cost.

And let’s not forget another major factor that has swelled the school district’s budget over the past few years: state-mandated teacher raises, and the increase in the minimum wage. Since 2014, when Marion voters first approved the tax referendum, the minimum wage has jumped from $7.93 per hour to $15.

You say you’re having trouble making ends meet these days with skyrocketing energy and food costs? Try paying the bills for a “family’’ of 44,499 students, five days a week.

And what of maintenance? Funding has changed there, too. Florida no longer provides Public Education Capital Outlay money to maintain schools. The last time Marion County received those funds was more than a decade ago.

“This means districts must raise/allocate their own funds to maintain aging facilities,” explained Kevin Christian, spokesperson for the district.

As a result, MCPS must allocate more of its budget to maintenance. The current budget allocation for maintaining over 7 million square feet of space is $11.4 million.

The Gazette has previously reported the need to grow school capacity, particularly in the southwest portion of our county. Unfortunately, revenue from the tax referendum can only be used for operations, not facilities.

But any increase in funding will be welcomed by school leaders trying to do more with less in a county that can’t seem to say no to new developments, and the thousands of new students who will be living in these houses and apartments.

Our community has long recognized the value of educating the next generation by twice overwhelmingly approving a slightly higher tax bill. It’s time to answer the call once again.

Vote yes on Nov. 8 to continue the one-mil tax.