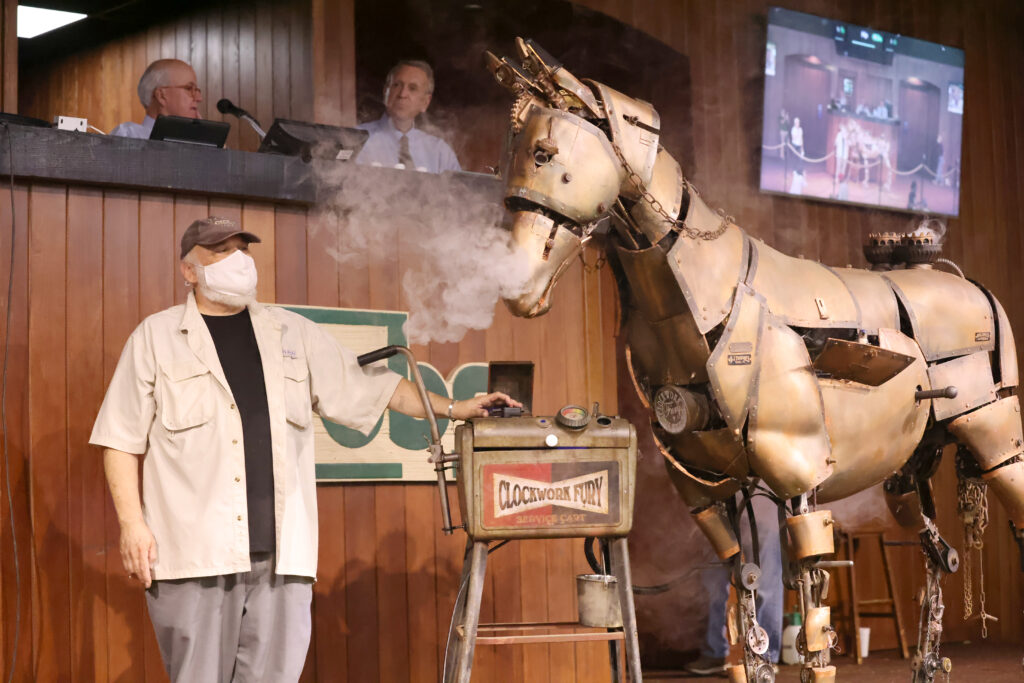 Artist Mark Hershberger, left, makes Clockwork Fury smoke as auctioneers look on to start the auction at the Ocala Breeders’ Sales Company in Ocala, Fla. on Tuesday, March 16, 2021. The original Horse Fever (2010) Horse Fever horse, that was reworked by Hershberger, was donated by Brent and Crystal Fernung of Journeyman Stud to be auctioned off as the last hip number on the first day of the OBS March Two-Year-Olds In Training Sale. The horse sold for $30,000 to benefit the Florida Thoroughbred Charities and the Marion Cultural Alliance. [Bruce Ackerman/Ocala Gazette] 2021.

It was a unique and whimsical vision that stood the test of time.

Artist Mark Hershberger’s imagination and innovation led to the steampunk-inspired vision known as Clockwork Fury as part of the 2010 Horse Fever herd.

Purchased by Brent and Crystal Fernung, Clockwork Fury served as a welcoming ambassador at their Journeyman Stud for the better part of a decade.

On Tuesday, a revamped Clockwork Fury found a new home, as the artwork was auctioned off at the Ocala Breeders’ Sales pavilion to benefit the Florida Thoroughbred Charities and the Marion Cultural Alliance.

Robin Andrews, an Ocala Breeders’ Sales employee had the winning bid of $30,000. For now, the sculpture will most likely remain at OBS, but eventually will move to Andrews’ residence.

“I really like rustic and he is rustic,” said Andrews, who has had her eye on the sculpture for some time. “It (the money) is going to a good cause.”

“We have our cultural endowment out of which we fund cultural grants throughout our community to our arts organizations,” said Baillie. “Every year we have a competitive grant process. This will go into the endowment and grow in perpetuity.”

The Florida Thoroughbred Charities portion of the proceeds will go to benefit Second Chances Farm at the Lowell Correctional Institution.

“We’re just thrilled,” said Laurie Zink, Horse Fever 20/20 Project co-chair. “It makes me happy inside any time that I see any of the horses on the street because I still see people enjoying them every day. Those horses say a lot about our community.”

While Crystal Fernung was thrilled Clockwork Fury would stay locally, the chance to help the arts and thoroughbreds were the most important.

“Tammy Gantt (Florida Thoroughbred Breeders’ and Owners’ Association) has worked so hard to try and fill in the gaps,” said Crystal Fernung. “She’s been a big force behind all this. To me, it’s perfect. it’s helping retired Thoroughbreds and helping the arts. Thoroughbreds are my life and passion. But being an artist myself and watching how the arts culture has exploded in Ocala, it’s a win-win, so I’m really thrilled.”

But Hershberger did more than just a touch-up.

“She (Crystal) said ‘let’s go beyond that,’” said Hershberger. “I did all the refurb work and then I started adding. I added an antique garage door hanger that I bisected through the wheels to make it look like he’d run on rails. I added about 100 mineral specimens. He already had a heart and brain of crystal. But I didn’t have a lot of crystals in there. I’ve done a lot of lapidary work.”

It was Hershberger’s predilection for the steampunk movement that inspired his creation, but he was looking for specific objects to add to the refurbished version of Clockwork Fury. World War II era opera glasses were used for his eyes. But he also has state-of-the-art technology, including LEDs and a fiber optic system.

“I cut them (the opera glasses) in half and used them because they were the right size and shape of what I had in my mind,” said Hershberger. “Everything that wasn’t in my head, I had to fabricate. It’s very close to the dream that I had to begin with. He’s more than that now because of this last refurb. I added probably thirty gears, pullies and springs. There’s probably 60 pieces in that part alone.”

Hershberger also saved one of the bluebird nests and installed it along with a robotic bird in the artwork.

“He’s got a backstory, and he would be lonely without a bird,” said Hershberger. “He has a full art studio in there. I said, ‘I’m an artist, so I’m going to put a bunch of art materials in there.’ So, it has pencils, a pencil sharpener, paintbrushes an airbrush, airbrush tubing and airbrush hoses.”

When Hershberger created Clockwork Fury, his first granddaughter was born, and during the refurbishing, his mother passed away from COVID-19.

“There’s a lot of me in him,” said Hershberger. “He’s a sculpture that you want to pull out and do a show with him.”