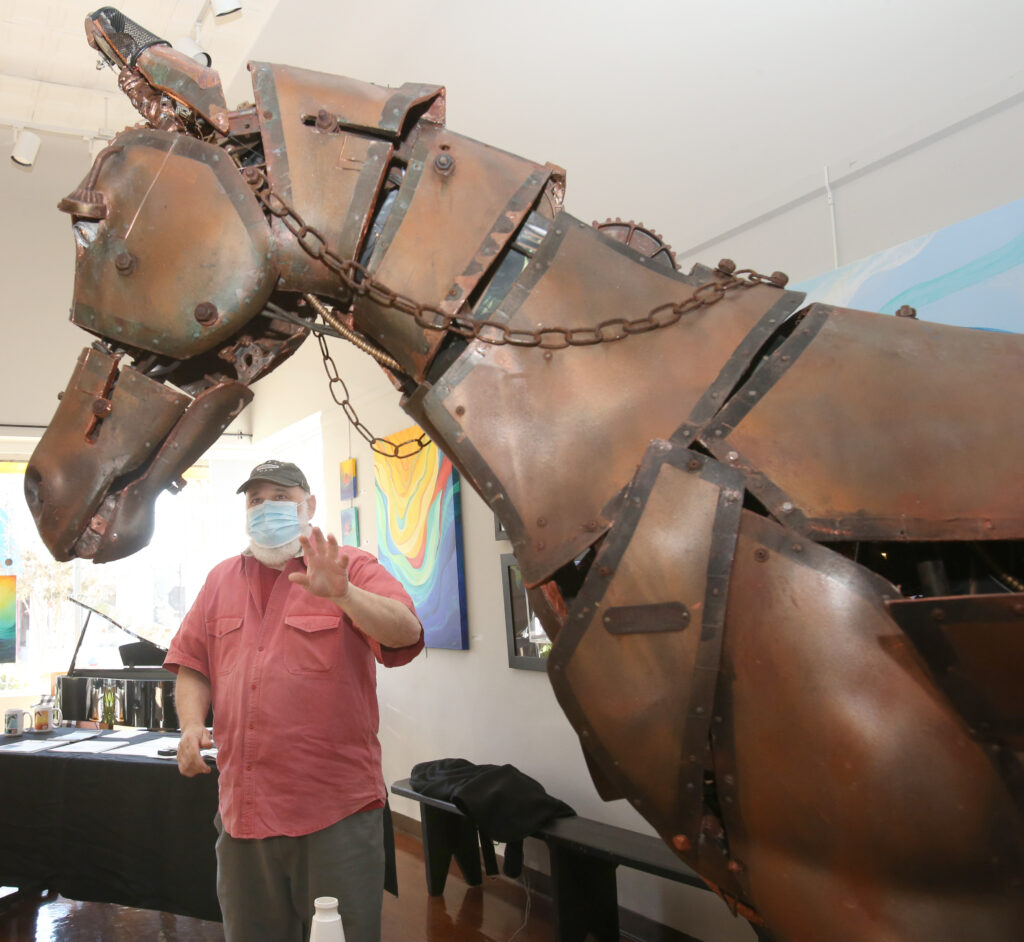 Horse Fever artist Mark Hershberger talks about his upgraded version of Horse Fever Horse Clockwork Fury during an unveiling event at the Brick City Center For The Arts in Ocala, Fla. on Thursday, Jan. 28, 2021. The Horse Fever Horse, was originally crafted by Hershberger in 2010 and Brent and Crystal Fernung of Journeyman Stud Farm were the highest bidder on the horse. The updated Clockwork Fury will be auctioned off as the last hip number on the first day of the OBS March Two-year-olds in Training sale at the Ocala Breeders’ Sales Company. [Bruce Ackerman/Ocala Gazette] 2021.

Horse Fever artist Mark Hershberger talks about his upgraded version of Horse Fever Horse Clockwork Fury during an unveiling event at the Brick City Center For The Arts in Ocala on Thursday. [Bruce Ackerman/Ocala Gazette]

Clockwork Fury has been a nontraditional — and wildly popular— Horse Fever ambassador from the moment his artist, Mark Hershberger, dreamed about a steam-powered horse rampaging through eerie streets.

The vision led Hershberger to cut the fiberglass equine into pieces and then reassemble them in “steampunk” fashion as part of the Horse Fever II herd in 2010. The finished product garnered international attention.

Fast forward to Horse Fever 20/20, the Anniversary Herd, which soon will introduce 15 new horses to the community, and a refurbished Clockwork Fury once again will have a starring role. The updated horse was unveiled Thursday at a ceremony and ribbon cutting at the Brick City Center for the Arts. Hershberger was on hand to reveal some of the changes he made over the last year, such as installing more than 100 crystals inside the horse, along with “a complete art studio,” fiber optics, a “crash cart” and a still-to-come audio system.

Clockwork Fury’s owners, Brent and Crystal Fernung, of Journeyman Stud, returned him to the herd this year so he can be sold at auction to raise money for the Thoroughbred Retirement Foundation’s Second Chances Farm at the Lowell Correctional Institution and the Marion Cultural Alliance, which came into being as a result of the initial Horse Fever public art project 20 years ago.  The project has provided more than $2 million in grant funding since inception.

In addition to the initial herd of 53 statues, the endeavor also has included Horse Fever in Motion and Horse Fever II. The fiberglass equine statues are painted by local artists and placed in public places or private venues by the sponsors.

Crystal Fernung, who greeted guests at the Brick via Zoom on a laptop late Thursday, said she will miss having Clockwork Fury at their thoroughbred farm. She also shared some insights into how he is different from the other herd members.

“Ninety-five percent of people thought he was metal,” she said, noting the copper-like appearance of the horse. “Mark told me about his dream, that the horse was running through a street with a log strapped to him that was on fire. He said he woke up and realized that his design would be a war horse. That’s when he came up with the idea of cutting him up.”

When she first saw Clockwork Fury, she was mesmerized. Once installed at their farm, her fascination grew.

“There are so many funny stories over the years,” she said. “When the van brought him out, the stallions went to hollering. Wildcat Heir, the leading sire in Florida, saw him in front of his paddock and his tail went up and his nose was blowing. He wouldn’t turn his back and there was this long stare down.”

Over the years, blue birds began to nest inside the crevices of statue. Hershberger included a bird’s nest and a mechanical singing blue bird in the updated version.

“When he showed that part to me, we both… well, he recently lost his mother… and I was thinking of all the people I have gotten to know because of this horse, and we both were a mess,” Fernung said

Clockwork Fury will go up for auction on March 16 during the Ocala Breeders’ Sales’ (OBS) Select 2-year-old sale. The statue will enter the auction ring as the last horse on the first day of the sale. He will be paraded around the ring like the other thoroughbreds at the day’s auction and will carry a hip number as well.

“I wanted to get optimum money for him, so he had to be reachable by people from all over,” Fernung said. “Kentucky, California, locally, wherever; Creech Horse Transport will van him to his new home, like a real horse.”

She said including Clockwork Fury as part of a real horse auction was a special touch.

“All of the Horse Fever horses are beautiful,” she added, “but what is going on this year is phenomenal. We are so glad he is part of this herd. And what OBS is doing is a big deal; what Creech is doing is a big deal. And Mark has done truly amazing things. I told him, ‘It must really be interesting inside your head.’”