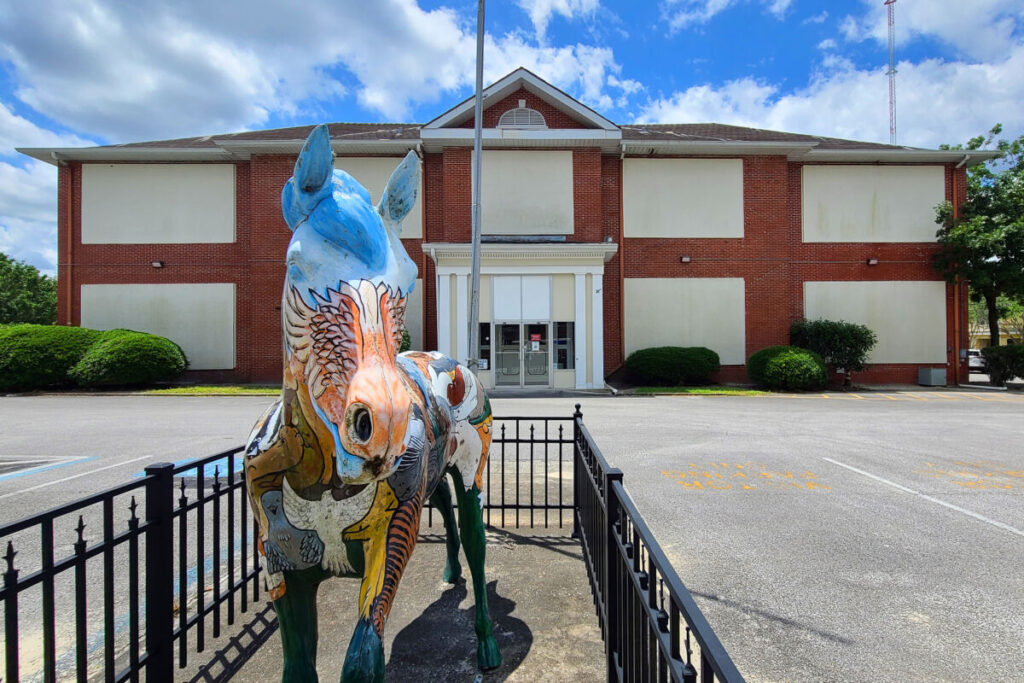 Saving the Central Elementary School building was the focus Tuesday evening at a meeting of the Historic Ocala Preservation Society (HOPS) at its headquarters, the Bryant House on East Fort King Street in Ocala.

The Marion County School Board (MCSB) is considering selling or demolishing the now vacant school building at 512 SE 3rd St., which, until a few months ago, was used as the school board’s headquarters. Society members want to see the building preserved.

Central Elementary School, also known as Ocala Primary School, was built in 1907, making the structure 115 years old and one of the oldest in the downtown area.
Although the meeting was open to the public, no MCSB members were present.

Lela Kerley, HOPS president, attended the last school board work session to let the board know of the society’s interest in restoration of the building and offered that members of the HOPS board could work in partnership with the school board in writing grant proposals that, if successfully secured, could help keep the building intact and possibly be used for another purpose in the district as well.

“As of today (Wednesday, May 11), the board hasn’t made a decision” about the property, said Kevin Christian, director of public relations for Marion County Public Schools. “There are a lot of factors to consider and a decision hinges on funding.”

He said a sale price has not been determined because the current market value of the property is not available at this time.
“SAVE CENTRAL” is the theme of the HOPS initiative to bring the building’s potential future to the public’s awareness before it can be torn down.

Several attendees at Tuesday’s meeting talked of having attended the school as students and its importance to the area and the culture of historic Ocala. The building is listed in the National Register of Historic Places and is an example of Edwardian architecture popular in the early 1900s.

After a fire destroyed much of downtown Ocala on Thanksgiving Day in 1883, brick and other fire-resistant materials were used in much of the rebuilding efforts, leading to the nickname of “Brick City.” Although time has taken its toll on those older buildings, many on the square and nearby have been preserved and repurposed into businesses, shops, restaurants and art venues in the heart of downtown Ocala.

Central Elementary was the first of three educational buildings built in Ocala, the first-of-its-kind academic complex in the state, according to Kerley. The others are Eighth Street (then a junior high school) and Osceola Middle School (then Ocala High School).

“Considerations to demolish and/or sell the building by the school board is of utmost concern to those who went to this school, know its history, and those who want to preserve Ocala’s historical architectural charm,” Kerley said. “We need public input about how to prevent this from happening.”

HOPS would like to encourage dialogue between the city of Ocala, the MCSB and HOPS.

“There is unprecedented growth here since the 1950s,” Kerley said. “We need to preserve Ocala in light of more housing, roads, jobs…”

HOPS Vice President, Rhoda Walkup said, “I would like to see it used as a school again.”

Attendee Julie Felter commented that “just because a building is old doesn’t mean it should be torn down. There are so many alternatives.”

Several others at the meeting said they had attended the school, as had some of their parents.

As for what would be involved in saving and restoring the Central School building to a useable condition, it appears the building is still structurally sound, HOPS reported. However, there are necessary repairs that would have to be addressed and a detailed report by a contractor has not been made at this time.

The original windows have been covered with concrete slabs, allowing moisture to build up inside the buildling. The slabs would have to be removed to allow light and air into the structure. Mold was discovered in two rooms and would have to be remediated. Outside, the original front portico is no longer there. Additional outside work may be needed.

Depending on what the building would be used for, such as a single business or to be shared by several businesses or educational groups, would determine potential interior remodeling costs.
No estimate has been determined for initial work.

The school board also owns several parcels around the school that should be considered in future ideas or plans.

Immediate goals of the HOPS organization, revealed at the meeting, are to:

• Encourage people who are interested in keeping the Central Elementary School building from being torn down to call their school board representative before the next work session to express reasons why it should be preserved and restored.
• Encourage those interested to attend the school board work session at 9 a.m. on May 19 in the Marion Technical Institute Auditorium, and to be sure to fill out the form that allows a visitor to give a public comment up to three minutes. The meetings are open to the public.
• Get word to the public about Central School hanging in the balance of existence.
• Seek donations of pictures of the building and events held there through the years.
• Get a petition out to as many Ocala residents as possible stating the importance of “Saving Central.” The petition states, “We would like to see the building restored to its original state and continue to be used as an educational space for future generations.” Find the petition online at https:chng.it/sK5hc5qZW
• “It would be ideal if a private investor would get involved with the project,” Kerley added.