Homelessness comes in many faces

When I became a special education teacher more than 20 years ago, I taught children who would never cognitively become adults, though their bodies would. I often wondered what would happen to them when they grew up.

As the executive director of Interfaith Emergency Services, I now know that some become part of the ever-growing homeless population in our country. They blend in with those who suffer from untreated mental illness and struggle to thrive in society. A society that, in general, would rather they just disappear.

Studies estimate that 70% of the homeless population suffers from either mental illness or intellectual disabilities. At one time, many of these people would be called mentally retarded, a term that now offends many. But many of those who would be offended by that antiquated term take little offense to these same people being homeless.

They are still human beings with the same basic needs as the rest of us. However, they are not capable of living independently, so they adapt to life on the streets. Let me be clear; they do not choose to be homeless any more than they chose to be born with a disability. Yet, I often hear people refer to them as something less than human, and it is truly heart-breaking.

Recently Interfaith received funding to hire staff that would work with homeless people with intellectual disabilities and mental illness that fall into the chronically homeless category.

First, we build a rapport, earn their trust, and then start engaging them in services that will hopefully result in stable or supportive housing. Since October, our staff has taken 99 people off the streets and prevented another 22 from becoming homeless.

Meanwhile, the city began shutting down the homeless camps in wooded areas around town, so many of the homeless moved to our street on Northwest Second Street, probably because they felt safe. Within a few weeks, it looked like a smaller version of the infamous Skid Row in Los Angeles. While some of them were the very ones we were working with and making progress, some were not. Soon, drug dealers (again, not our clients) and others who prey on vulnerable populations showed up. 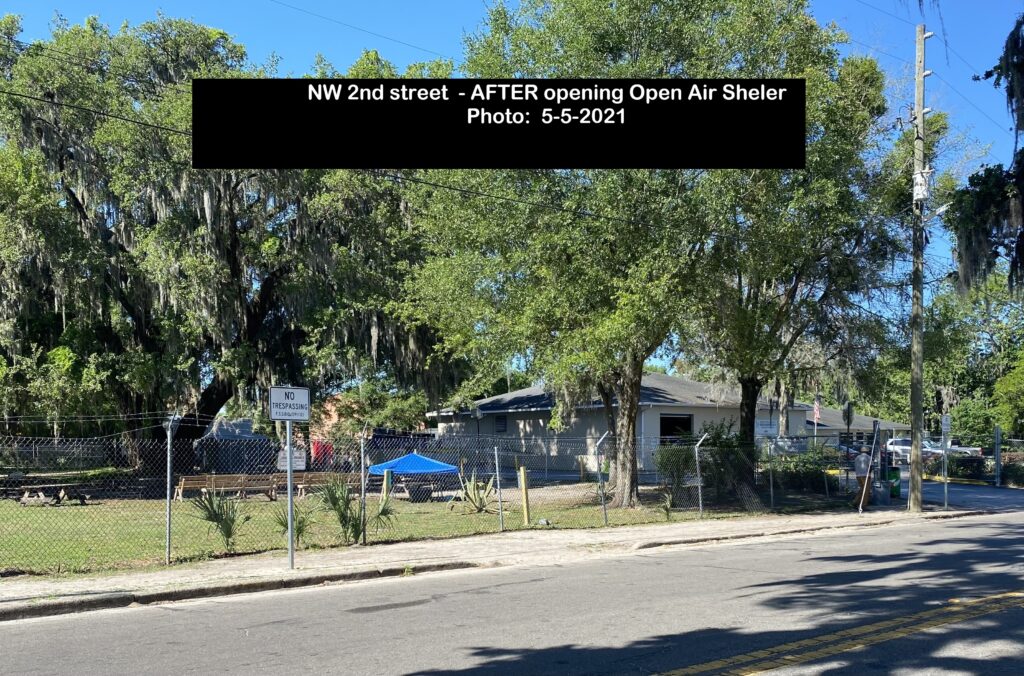 The homeless didn’t have access to bathrooms, as we lock our gates at night. Imagine 40 people night after night without access to a bathroom. We had to take action without ostracizing the clients we were trying to help. Out of desperation, we invited those who wanted help onto our property at night. We then asked the city to deal with those on the streets outside our property.

Our clients have access to bathrooms and a place to sleep without fear of arrest or assault. We vet our clients, assign case managers, issue cots and totes to keep their bedding dry, all of which are secured out of sight during the day. We hired a security guard to monitor the area and notify police of loitering outside the gate.

The police also came and offered to issue a trespass warning to any loiterers. We are truly grateful for their support and the compassion they used in dealing with our clients. We average about 15 people behind the gates each night. Some have already transitioned to living indoors. This open-air shelter is working better than we had hoped.

Within a week, the street in front of the facility was clear.

We offer them a place to be, where they have access to restrooms and a secure area. Even so, we face opposition from some who worry about blight. However, since we opened this open-air shelter, the street along our facility is cleaner than ever. Those lodging with us clean the property on both sides of the fence daily. Both businesses that share our block have noticed the improvements and are in full support of what we are doing. We are seeing improvements in the safety and well-being of individuals who have been homeless for years. To be clear, I’m not talking about the criminal element and drug dealers that plague our entire city. I pray that Ocala Police Chief Mike Balken can fill his force with enough officers so the police department can appropriately deal with them. 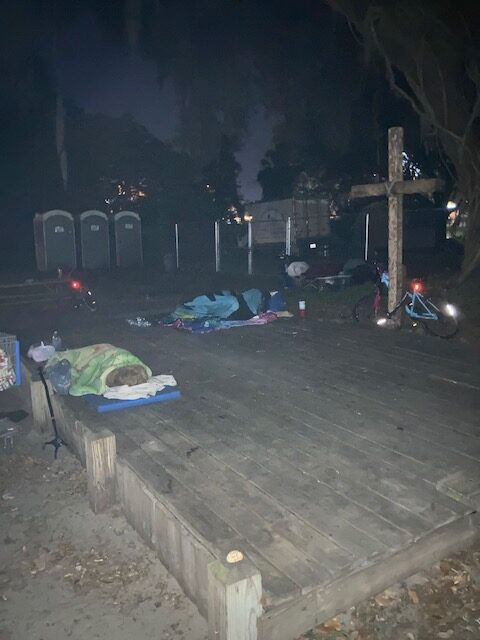 As for our chronically homeless, city authorities have chased them from place to place, lot to lot, and nothing changes. When asked where they should go if not allowed to sleep on our property, no one has the answer. The truth is there is no place in Ocala where the homeless can legally sleep.

Many have lived in Ocala for years. Don’t they have a right to have one space that can be theirs? Just one lot where they can sleep without breaking a law or violating an ordinance?

A recent study by the Public Policy Institute of Marion County revealed that we need at least another 190 supportive housing units to house the special-needs homeless in our county. Until then, where do they sleep? Where do they bathe? Where do they use the bathroom? Where can they just be regarded as humans?

Interfaith has a plan and is working tirelessly to end homelessness for as many as possible, one person at a time. We may not have all the answers, but until someone has a better plan or any plan, please let us do what we are called to do. We hope this is a temporary solution. Our partner in ministry, The Salvation Army, shares the same burden and is considering operating a low-barrier shelter that would make a positive impact. To keep denying this population of Ocala citizens a place to merely exist is simply wrong, inhumane and I believe it grieves the heart of God. At the end of the day, homeless lives matter too.