A place to lay their head

He also racked up more than $12,000 in fines and fees after nine convictions under Ocala’s open lodging ordinance.

His mugshots over the years are intermittently clean shaven and bushy bearded with the deep lines from a life on the street apparent on his face.

Leach’s convictions are an example of the 406 open lodging convictions highlighted in a lawsuit filed against the city in 2019 by the ACLU of Florida, Southern Legal Counsel and Andy Pozzuto.

In February, U.S. District Judge James Moody ruled that arresting homeless people who don’t have access to shelters is cruel and unusual punishment violating the Eighth Amendment of the US Constitution. The court also found issuing trespass warnings without a process for appeal violated the 14th Amendment’s due process clause.

In the months since the decision, the city’s approach to the homeless shifted, but there is no comprehensive strategy to address the homeless issue. 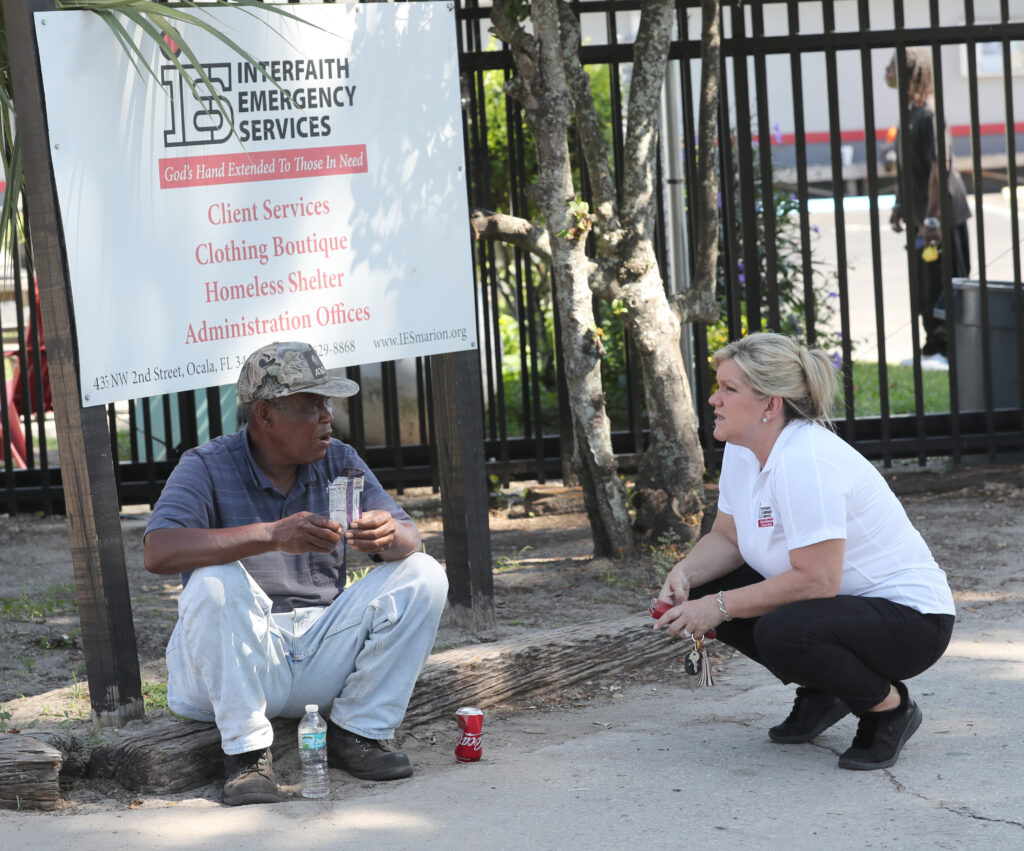 The City of Ocala introduced its open lodging ordinance in 2002.

Part of the original ordinance stated a person was subject to arrest in the city if they were sleeping in public and admitted to being homeless.

After the court ruling, the Ocala City Council unanimously voted to amend the ordinance on March 2, eliminating the homeless reference.

According to the complaint, issued trespass warnings did not have an expiration date and only expired when rescinded. While the city argued a trespass warning could be rescinded by appealing to the city manager, mayor, the city council or by requesting a complaint form from OPD, the court found there was no established procedure for appeals.

“We had to make some adjustments and we’re still working through that. You know, one of the issues was simply the ability for someone to appeal a trespass warning… something we’ve never had in my 27 years of being here was the ability to appeal,” said Ocala Police Chief Mike Balken.

Balken said an official appeals process or an expiration date on trespass warnings is a good idea.

“To think that that trespass warning would be for the rest of your life when potentially you could leave the next day, go serve your country overseas, come back much more mature and be a war hero and you can’t go to the downtown square,” Balken said. “So, in that respect, it made a lot of sense to us.”

“The belief is that the (assistant state attorney) will be able to ask the judge to take a closer look at these individuals during first appearance, setting bond, and while imposing a sentence for those who constantly violate our ordinances,” wrote OPD Capt. Charlie Eades in a 2018 email introducing the stamp to OPD officers.

Eades goes on to instruct officers to check prior convictions for each person they arrest for violating a city ordinance. If an individual has three or more prior convictions, the arrest affidavit is to be stamped prior to being delivered to the county jail.

Both Greg Graham, the former OPD chief, and Ocala Mayor Kent Guinn said efforts were being made to sway county judges to enforce stricter punishments against habitual offenders, according to case transcripts.

“Well, eventually, we tried to get the state attorney’s office and the judges to at least give the – call them habitual, if you want – offenders more time in jail. Because at that point, it was just a revolving door,” Graham said during a 2020 deposition.

“Just that first appearance they’ve got the case and he or she is a habitual offender, they’ve been arrested or convicted this many times, you know, it’s time to take a break for a while and, you know, go to jail for six months or whatever the case may be, rather than two days,” Guinn said.

When Robert Leach came before Judge Thompson on Feb. 15, 2019. Thompson welcomed Leach to the stand, according to court transcripts.

“Robert Leach, come on up. Habitual…” Thompson said. “Six months in jail. I think that’s what the mayor wants.” 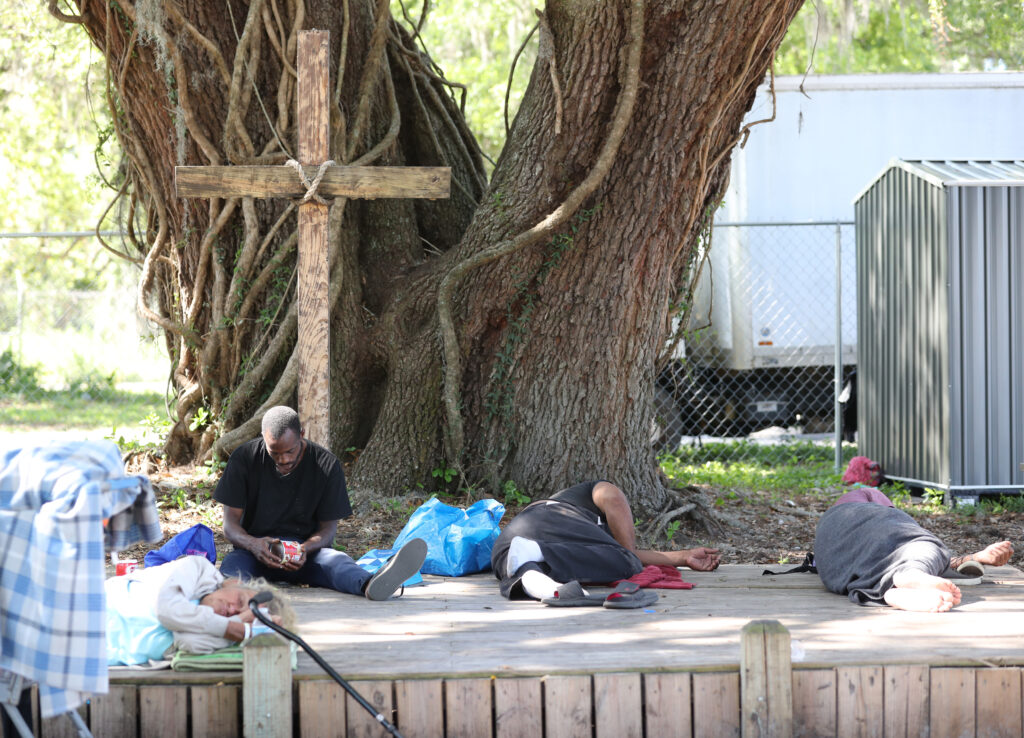 Homeless people sleep and rest in the Agape Garden at Interfaith Emergency Services on Northwest 2nd Street in Ocala, Fla. on Wednesday, May 5, 2021. [Bruce Ackerman/Ocala Gazette] 2021.

In its ruling, the federal court concluded that OPD’s failure to inquire about shelter availability prior to arresting a homeless person for open lodging violated the Constitution, but it also put the focus on the shelter situation locally.

According to the lawsuit, on any given night, approximately 150 homeless people go without shelter in the county. But there are only 65 shelter beds available in the county for single adults.

While the Salvation Army has 40 beds for men and 20 beds for women, Interfaith Emergency Services has five beds for single women. Both shelters, however, have eligibility requirements and the Salvation Army allows individuals to seek shelter at its facility just 14 days a year. After the COVID-19 pandemic, shelter space was even scarcer, when shelters cut capacity due to social distancing guidelines.

During its regularly scheduled meeting on May 4, the council introduced the measure.

The proposed emergency shelter would offer the homeless a place to stay, subject to fewer requirements. It would be temporary until the establishment of a permanent “low-barrier” shelter .

“The site will include shade structures that allow the homeless population to be in a safe location (out of the public right-of-way), but easily accessible to police and supporting service agencies,” according to documents filed with the city.

The shelter would include bathrooms and a fenced-in area to sleep.

“It would provide a safe place for them to sleep (with security) while they are engaging in case management with our homeless services team,” said Karla Grimsley, Interfaith’s CEO, in a text message.

Ocala councilman Ire Bethea Sr. expressed concern over the plan and how it would affect nearby residents.

“But the general consensus of the citizens in that area is that they would prefer it not be put there. And that’s truly the bottom line.”

The proposed rezoning will go before the city council on May 18 for its second and final reading.

It’s the second plan for an outdoor shelter to come before the city since 2018.

The city considered a 30-by-82-foot pavilion at Interfaith in 2018. The pavilion was to include 15 picnic tables, two bathrooms, a speaker system and office space.

However, the pavilion plan fizzled when the city and the Interfaith could not agree on who would pay for the $508,000 project.

“We’ve moved away from the open lodging arrests, per se,” Balken said in a recent interview. “We’re not going to come up on public property, find you sleeping there and arrest you for open lodging.”

However, private property is a different matter. A property owner has the right to exclude someone from coming on to their property.

For public property, including city streets, sidewalks and parks, Balken said trespass warnings will only be issued if criminal activity is taking place.

“What’s frustrating for us is, and I know Greg Graham’s comment very well that ‘we’re not going to arrest our way out of the homeless problem.’ And it’s absolutely not something we want to do,” Balken said. “I’ve got better things for my police officers to do then running around trying to police that kind of criminal activity. I really do.

“However, what is frustrating about this problem is one, it’s not a police problem. Homelessness in and of itself is not. The crime related? Yeah, absolutely. And we’ve got to deal with that. What is frustrating though is when we’re placed in the middle.”

Both police and the homeless have largely kept their interactions respectful as the city enforced the open lodging ordinance.

Since adopting its new practices, however, OPD has received grievances from local businesses.

“We do get called to a lot of complaints about homeless-related crime. And it is frustrating. Because again, we’re trying to make sure we’re looking out for the rights of everybody involved,” Balken said.

“We can certainly direct them to different resources available to them, but I have no cure… a police officer in this city or anywhere is not going to have a cure for somebody being homeless.”