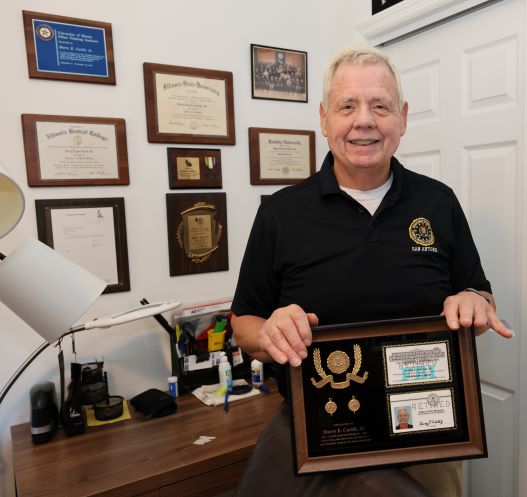 Harry Carlile poses for a photo with his FBI accreditation at his home in the Weybourne Landing neighborhood at On Top of the World in Ocala, Fla. on Monday, August 15, 2022. Carlile, who is now retired, worked for the FBI as a training specialist for 22 years and before that, he worked as a police officer for the Peorio, IL police department. [Bruce Ackerman/Ocala Gazette] 2022.

To say that Harry Carlile is a man on the go would be an understatement. A career in law enforcement has taken him from Peoria, Illinois, where he was born, on a path through the United States and into far-flung places in the world, but he finally settled in Ocala.

“I was always drawn to police work,” he said. “I was in the Police Explorer groups with the Sheriff’s Department while in high school. My father wanted me to study math all the way through high school and when I went to college.”

He pursued his bachelor of science degree in criminal justice at Bradley University in Peoria and worked for that city’s police department for 20 years as an officer.

Carlile completed studies for a master’s degree in criminal justice at Illinois State University in Normal, Illinois, and had begun work on a Ph.D. when he was hired by the FBI as a training specialist in higher education administration. The position first took him to Clarksburg, West Virginia.

The FBI then assigned Carlile to the southern part of the country and his region included Florida, South Carolina, Tennessee and Texas. While in Florida, he traveled to Tallahassee, Jacksonville, Pensacola, Daytona Beach, St. Petersburg and Tampa. The assignment gave him a taste of southern weather.

“I liked West Virginia,” Carlile reminisced. “It is a great place to live and have a family but I am done with snow and ice and winter.”

The FBI job gave Carlile the chance to travel all over the world. He taught at the International Police Academy in El Salvador, which is one of only four such academies in the world. He also taught in Hawaii, Puerto Rico and Guam.

“I got to meet law enforcement employees in various areas. It was different, but the same,” he offered.

For example, he said, there are many FBI systems that connect, citing the FBI fingerprint system used by the National Crime Information Center. He said one of his tasks was when the FBI called him to New York City for two weeks following the 9/11 attacks on the World Trade Center to identify human remains by fingerprints. 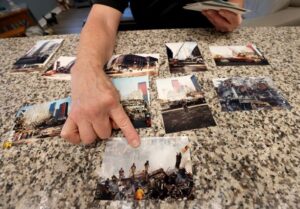 Harry Carlile looks over photos of Ground Zero, where he worked for the FBI after the Sept. 11 terrorist attacks on The World Trade Center, as he talks at his home in the Weybourne Landing neighborhood at On Top of the World in Ocala, Fla. on Monday, August 15, 2022. Carlile, who is now retired, worked for the FBI as a training specialist for 22 years and before that, he worked as a police officer for the Peorio, IL police department. [Bruce Ackerman/Ocala Gazette] 2022.

Carlile was married for 20 years before divorcing. He has two daughters. Jennifer lives in Roanoke, Virginia, and is a doctor of osteopathic medicine specializing in family practice. Alycia lives in Birmingham, Alabama. She has a bachelor of arts degree from Fairmont State University in West Virginia and is studying in to “follow her calling” to start a nondenominational ministry in Freeport, Florida.

Carlile retired from the FBI in January 2021 and kept thinking of retiring in the south.

“I looked at Florida, researching on the internet, and Ocala just kept popping up,” he said.

He lives in the On Top of The World community.

“The number of things here to do for seniors is amazing,” he said. “There are so many groups you can join and so many opportunities for training in so many areas. There is the Master the Possibilities Education Center here. I will always be learning. I cannot imagine not doing anything.”

And, he added, “The Sheriff’s Department has all these volunteer opportunities in the law enforcement area. I volunteered to work with the Cold Case Unit and have been doing that for two years so far.”

Carlile said he has investigated two cold cases so far for the Marion County Sheriff’s Office, along with his team investigator Mike Thompson, who is a retired deputy from Alachua County.

“Lately our schedules have both been busy,” Carlile said.

Since retiring, Carlile has started his own business, The Carlile Consulting Group (CCG) in Ocala, doing professional witness duties in the area of law enforcement.

“Moving to Ocala has been a good experience. Even though I am not into Ocala’s big draw to horses and golf, it is a good physical location. There is so much to do,” he said.

Carlile and his girlfriend Jean love to travel, including taking cruises.

“There are five cruise ports close by,” he enthused. “This town is central to everything.”