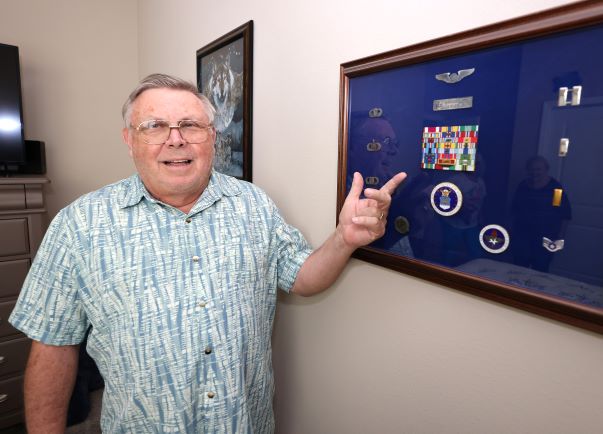 Ken Featherling poses by some of his U.S. Air Force memorabilia at his Weybourne Landing home by On Top of the World in Ocala, Fla. on Friday, Oct 7, 2022. [Bruce Ackerman/Ocala Gazette] 2022.

When Kenneth Featherling graduated from his East Saint Louis, Illinois, high school in 1969, and joined the U.S. Air Force so he could see the world, he embarked on a career path that would see him succeed in both the military and later law enforcement.

His first assignment was in Columbus, Ohio, working as a mechanic on C130 cargo planes. He then was sent to Vietnam, then Thailand.

While progressing through various duty stations, he was able to further his education, earning a bachelor of science degree in criminal justice and a master’s degree in public administration. Featherling rose up the ranks in the Air Force and became an air traffic controller, later an instructor in that area, then a combat controller.

Following the air traffic controller career path, he was stationed at Kincheloe Air Force Base in Sault St. Marie, Michigan, where the B-52 planes there were loaded with nuclear weapons on board. This was during the cold war in the early 1970s, he said. In explaining the intensity of that assignment, he said the pilots lived in dormitories right next to the airplane hangars. When alarms sounded, the pilots had 15 minutes to get into their gear, into the cockpit, and to taxi onto the runway, ready for takeoff. His job as an air traffic controller was to immediately order the runways cleared of any snowplows or anyone and anything else, because the planes were going to take off, no matter what. Asked if he was nervous about being around the nuclear weapons, he said “After being in Vietnam, that wasn’t scary.”

Featherling applied to be an air traffic controller instructor, and he eventually was stationed at the Keesler Air Force Base in Biloxi, Mississippi. He then was chosen by the administrator at the school to teach Air Force combat controllers. “I liked the action of being a controller,” he said. The controllers persuaded him to become a combat controller himself. “I’m an adrenalin junkie,” Featherling confessed.

On a temporary duty assignment in Seattle, , he was trained to jump out of airplanes in addition to learning escape and evasion, survival training, water survival and POW training. In combat control training, the service members were taught to eat snakes and bugs for protein.

“You just skin the snake, cook them and eat them!”  he said. “They are not bad. You just have to get used to doing that. It has been proven bugs and crickets and snakes have more protein than beef. Asian people eat them all the time. You have to have that mind-set. Americans do not have that mind-set. If you want to survive, you eat them.”

On one of the night jumps, he landed wrong, and broke his back.  He decided he did not want to risk becoming paralyzed if something else were to happen on another jump, so in 1980, he separated from active duty and went into the Reserve Officer Training Corp (ROTC) as an officer cadet.

After completing his degrees at that time, he advanced to the rank of 2nd lieutenant, and went to Tyndall Air Force Base near Panama City, FL, to train to be an air weapons controller.

“You use a radar scope,” he explained. “You can see our pilots and planes and can pinpoint enemy plane locations. You tell them (the pilots) where to go to get them!” With this training, he was stationed in Germany for five years. “The Berlin Wall was still intact then,” he related, adding “That was very interesting.”

While stationed in Germany, the Chernobyl Nuclear Power Plant in Ukraine, what was then part of the Soviet Union, blew up in 1986. “The radiation cloud blew right over the top of our base,” Featherling recalled.

Fort Leavenworth, Kansas, was his next assignment. There, he worked with the Army as an air weapons controller for three years.

His stay was not long, however, because soon after he arrived, the Desert Storm war broke out in Kuwait, and he was immediately sent there. He and his fellow service members were told they were leaving the same day and they were not even allowed to tell their families where they were going. Featherling said he was chosen to go because he had been to Saudi Arabia several times before in his career and understood the political system and the culture. “They  had ‘religious police’,” he said. “They had lots of cultural rules and they enforced them.” He was there for the duration of the war, being the “first one in and the last one out.”

It was 130 degrees there, Featherling remembers, adding,  “I didn’t want to go back.”  In 1991, he decided to retire, having advanced to the rank of captain. His superiors encouraged him to stay in the service and earn the rank of major, but he stuck with his decision to retire.

Featherling, however, said he “wasn’t very good at retirement!”

He returned to the Columbus, Ohio, area, and began working as a patrol officer on the street, advancing to the rank of supervisor. He was with the police force for 16 years and was occasionally injured on duty. “There were difficult situations where fights ensued, he said, adding that this affected his previous injuries incurred in the military. “The older you get, the longer it takes to heal,” he added.

While in Columbus, Featherling received an award from the Ohio Attorney General for his work in the area of missing and exploited children. In his last several years there, 77 arrests were made of sexual predators. So many people, and especially children, are scammed and lured by many methods used by criminals in the world,” he said. “People need to be very careful who they are talking to today.”

He retired from police work as a sergeant in 2007.

Medals Featherling has earned include a Meritorious Service Medal, two Air Force Commendation Medals, one Army Commendation Medal, and “lots of medals during my Vietnam and Desert Storm assignments” he related. In police work, he received three life-saving medals and three for outstanding service.

“I’m used to doing things,” Featherling said, and he joined the Crime Scene Investigation Unit in San Antonio, Texas, for about six months before requiring a hip replacement, and had to stop that work. “As I said, I’m not good at retirement” Featherling said, explaining he then moved to Hawaii where he joined the FBI. That lasted only about four months. “You could drive around the entire island in five hours! Nothing changes. There were too many tourists, it was expensive,” he said, explaining his ensuing move to work with the FBI in Salt Lake City, Utah, for several months. The cold weather there hurt his bones, he said, and he could not stand to stay there.

Featherling is married, and asked what his wife, Maureen, thought about all of his adventures, he said, “She thinks I’m crazy!”

She agreed. “We’re like rolling stones,” she said. “We were never in one place for too long!”

The couple met on Featherling’s first duty assignment in Columbus, Ohio, where she lived. He was working on gunships at that time.

They have two sons, Kenneth, Jr., who works with the FBI in Washington, DC, and Adam, who works for Ohio State University in Columbus, Ohio, in charge of the seven OSU Police Department extension campuses. “They have their dad’s DNA!” Maureen exclaimed.

The pair moved to their son’s home in DC for a couple of years and traveled for enjoyment to South America, Australia, Argentina, and Chile.

In talking of her time as a military wife and mom, Maureen said, “We both had the wanderlust, and it was perfect for us at the time.”

The pair researched many areas in which to live in their retirement, choosing Ocala because they like the weather. “It’s not as hot as Texas!” they shared. A sister-in-law lives in Tampa but they found it is more expensive than in Ocala, they said. “There are fewer alligators here, and a lot less possibility of hurricane devastation here,” they said, adding “All cruise ports are near-by, too, and we love to take cruises!”

Despite a 100% disability rating from both the military, and from his police work, Featherling still is not taking life lying down. He volunteers with the Marion County Sheriff’s Office’s Cold Case Unit, the SO Citizens Police Academy, CERT (Civilian Emergency Response Team), and he has taken classes at the Master the Possibilities facility at On Top of the World where the couple lives. He belongs to the fishing club and the woodworking club at OTOW.