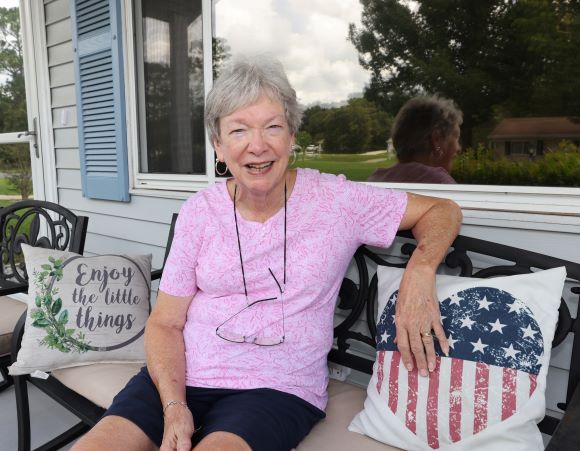 North Carolina native Ann Hines has lived in Ocala a little less than a year and said she loves it here.

Hines was born in Wilson, North Carolina, and has lived in several other states in the south, including Mississippi, Virginia, Georgia, Tennessee, Louisiana and Alabama.

In her youth in North Carolina, she was a cheerleader and during her junior year in high school was voted homecoming queen, an honor usually held by a senior. She met her first husband, Charles White, in high school and they married right after graduation. The couple immediately moved to Richmond, Virginia, so he could continue his education. While there, they had a son, Charles (Chuck) White Jr.

When they later divorced, Hines and her son moved back to North Carolina, where she went to work at Wilson Memorial Hospital in the areas of personnel and public relations. It was there that she met Regie Hines, who was employed at the hospital in food service. They married and he brought one daughter, Hillari, to the marriage.

White lives in Dunnellon and works in the supply chain at HCA Florida West Marion Hospital. His wife, Susan, is a registered nurse and the director of case management at HCA Florida West Marion Hospital and HCA Florida Ocala Hospital. Susan’s daughter, Jessie, has a son, Oliver, who is 4. White has a son, Drew, who is stationed at Shaw Air Force Base in Sumter, South Carolina. He and his wife Sarah are expecting a daughter soon. Regie’s daughter, Hillari, and her husband, Aaron Malone, who live in Saraland, Alabama, have a son, Grant.

Ann and Regie had moved to Alabama and would have been married for 43 years on Oct. 1, but he died of the coronavirus, she said. She also got the coronavirus but quickly recovered.

She was employed for the Alabama Department of Rehabilitation Services, in the blind and deaf unit.

Her son did not want to have his mother living alone and so far away from him and encouraged her to move to Ocala. He and his wife looked at several houses and showed them to his mother via FaceTime. They spotted a house in Palm Cay and all of them loved it. Although Hines did not see the house in person, she decided to buy it. It was God moving in the situation, she said, as her home in Alabama sold very quickly. She arrived in Ocala on Dec. 16, 2021.

“There are such nice, friendly people here,” Hines said.

“I especially like the weather in the winter,” she said, then added with a smile that getting used to the summer humidity was not so pleasant.

“Ocala is so nice…it is accessible to everything. I like Silver Springs and the World Equestrian Center is marvelous,” she enthused.

Palm Cay is a 55+ community and Hines said she enjoys the amenities it has to offer.

Hines makes friends easily and has settled into membership at Friendship Baptist Church.

Hines said she stays in contact with her sister Linda Sherrod and brother Glenn Barnes, who both live in North Carolina.

She said she loves to read, visit with people and talk.

“I just love people,” she said.

“I would like to find a part-time job,” she added. “Something in administrative or secretarial work. I feel the Lord will lead me wherever He wants me to be.”