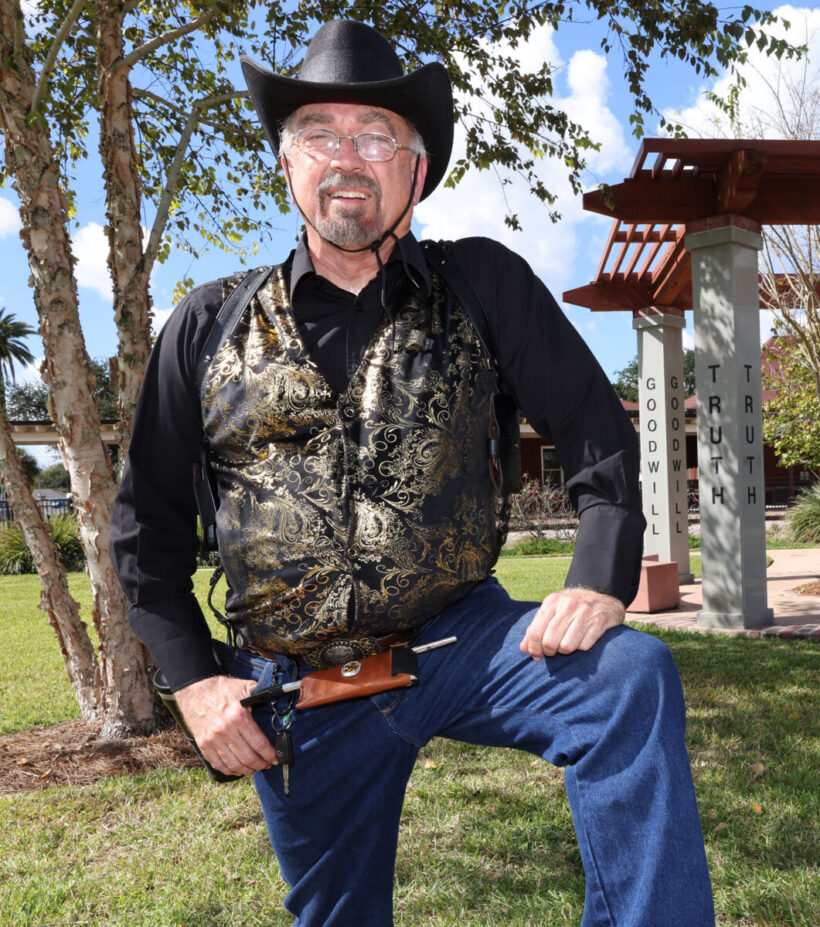 Mark Bushfield greets people at the local restaurant where he works with a smile, a bit of comedy or even a magic trick. Even playing the part of a clown is in his repertoire. He is quite popular with his customers, and young and old alike enjoy his happy persona.

“I have loved humor my whole life,” he remarked. “I like to make people laugh.”

When customers pay their bill with a credit card, he sometimes tells them, “Tap the tip on the top, swipe the stripe, dip the chip. Now you can grip the chip and give it the slip!” He confesses to being influenced by Dr. Seuss!

Bushfield is full of one-liners, and after an encounter, some people have told him, “You made my day. Thank you!” When someone provides their name for their order, and proceeds to spell it for him, he often says, “Oh, good! You know how to spell it, too!” Or if he asks, “How many did you want?’’ and they reply, “Aah, two,” he will sometimes remark, “Did you just sneeze?! I did not know if I should bless you!” If the customer asks if their food comes with sauce, he may respond, “No, sauce comes on the side. We let you ruin it!”

Children especially love Bushfield’s magic tricks, but older folks take delight in them as well. For example, when he is completing an order, he will point his index finger and thumb upward to make it look like a play gun, and it makes a squeak-squeak sound. He calls that one “the two-toot salute”! If people ask him, “How did you do that?” he responds by repeating it and saying, “I did it like this!” He has also been known to pull ketchup or other sauce packets seemingly out of mid-air.

During the COVID-19 pandemic, when the eat-in portion of the restaurant was closed, he worked outside in the drive-thru line, and he does both today. He can be readily recognized by the black cowboy hat he wears to keep the sun off his head. When he added a protective plastic bubble shield over his face to greet customers during the pandemic he became known as “Space Cowboy.” Some people who recognize him when he is not working still call him that moniker.

To end the suspense, we reveal that Bushfield works for Chick-fil-A at 3114 South College Road in Ocala. He has a following of regular customers. Some have shot videos of him, posting them on social media, and they have “gone viral,” Bushfield said.

“I like the clowning aspect of my life,’’ he said. “I get to tell jokes and perform magic tricks. I have learned that humor is a good way to cope with and relieve frustration.”

Now for the head turner. There is another side of Space Cowboy, and it will be revealed here and now. Hold on to your cowboy hats!

Bushfield is an ordained Baptist minister, a youth pastor, an artist and a creative writer. He has been a missionary, an Army chaplain and a musician. He says his nine-year employment at Chick-fil-A is an avenue to share his love of humor and goodwill. He currently operates a camera at Meadowbrook Church during worship services. And he loves to sing.

Let us go back to the beginning. Bushfield was born in Southern California and had one sister, who is now deceased. His father was a pastor, and his mother was a teacher in a Christian school. He attended a Baptist elementary school and a Lutheran middle school, prior to going to a public high school. In Sunday School, he learned Scripture memorization. That background, and a book by theologian C.S. Lewis called, “Mere Christianity,” along with his ever-growing awareness of God in his life, he said drew him into the ministry.

After high school, he attended the El Camino Community College in Torrance, California, for two years; then California State University in Long Beach, California, where he earned his bachelor of arts degree, with a concentration in creative writing.

Bushfield earned a master of divinity degree at the American Baptist Seminary of the West at Covina, California. He spent two more years of studying, plus another year at the Berkeley, California branch of the seminary with the same name.

While living in California, he met and married his wife, NAME, who brought two sons into the marriage. The couple has one daughter, Annalese.

From 2005 to 2013, Bushfield served as pastor of the Burrville Congregational Church in Watertown, New York.

He became a missionary for Youth with a Mission (YWAM) for six years, during which time he served in Mexico, France, and Ukraine. For this endeavor, he spent three months in Discipleship Training and after six weeks was sent to Mexico, where his ministry included drama, evangelism and accompanying and helping medical and other professionals in the “Buildings Without Borders” and the “Doctors Without Borders” evangelistic programs. For four years, he was a trainer with YWAM.

During his missionary work, he was involved with primarily a clown ministry for children, writing skits, working with puppets, roles as a clown, testimonies, music and children’s sermons and Bible studies, always working with a local church, encouraging people to go there if interested in additional discipleship. Youth groups from various churches involved with YWAM, took part in summer short-term missions work including training in discipleship, learning to hear the voice of God, divine healing, and evangelism schooling, after which they would spend six weeks in Mexico missionary work.

“What I liked about it,” Bushfield explained, “is that it was a very practical application of faith.”

Bushfield joined the Army as a chaplain assistant for two years, then was promoted to a regular chaplaincy for six years. He was assigned to Fort Polk at Polk, Louisiana, then Fort Drum, near Watertown, New York. He was sent to Bosnia twice, and later to Korea and Iraq.

Bushfield and his wife were divorced about the same time he left the military.

While he has worked for Chick-fil-A, he has taken a three-year online course with Capella University in Minneapolis, Minnesota, studying to be a marriage, family, and childhood Christian counselor. He completed all of the course work but not the practicum work required to be certified.

Bushfield wanted to be near to his daughter, now 24, who lived in Florida at the time. She is currently studying to be a nurse and living in Tampa. His stepson, Michael, 36, lives in Idaho and has two sons. Stepson, Robert, 34, is an art teacher in Sarasota.

For a time, Bushfield was housed at The Ritz, a home in Ocala for veterans, until he was able to move into his current home in Northwest Ocala.

Nearing retirement age, Bushfield is interested in podcasting, comedy, and ministry. He likes creative brainstorming and is open to other avenues of ministry, a pastorate, or an online church where he could also incorporate comedy.

During his work with Chick-fil-A, Bushfield painted the horse that stands in front of the restaurant. That project took about two years to complete, he said.

Manager of the restaurant Jeromy Williams said, “Mark has received the most positive comments from guests in the nine years he has worked here. We are crazy proud of him! “