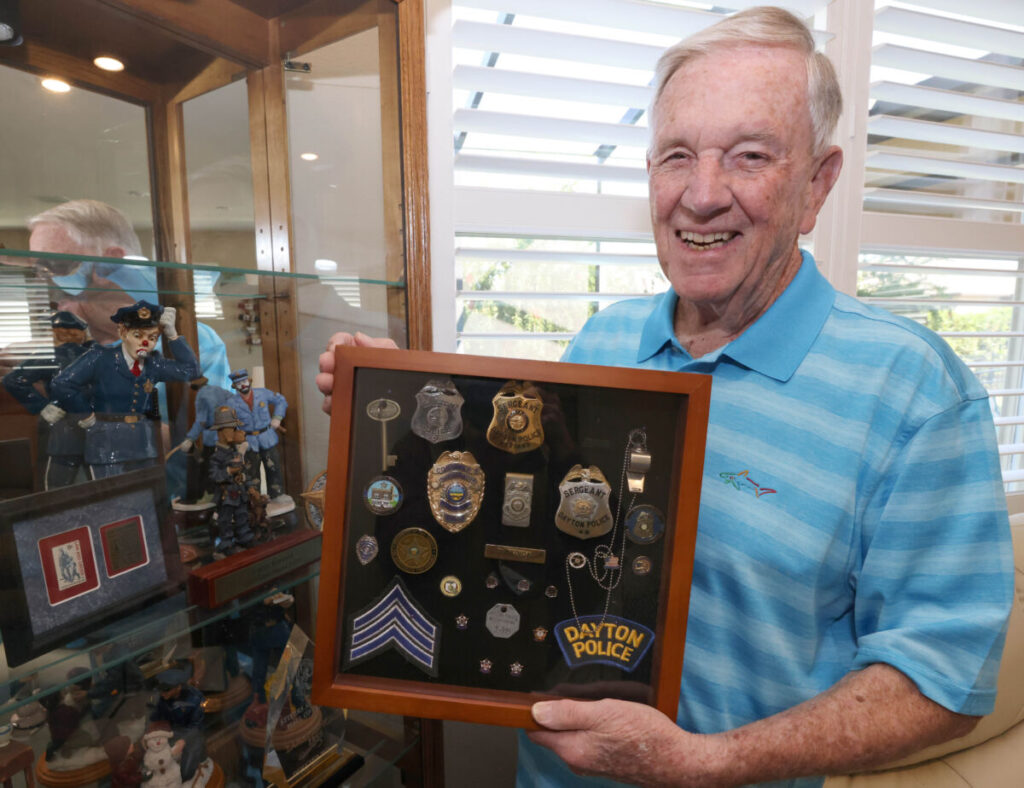 Larry Kincaid shows some of his police badges and other memorabilia from when he worked at the Dayton, OH Police Department, at his Stone Creek home in Ocala on Friday, Oct. 21, 2022. [Bruce Ackerman/Ocala Gazette] 2022.

Larry Kincaid remembers that when he was just 7 years old, he knew he wanted to be a police officer…and that from first-hand experience.

When he was just a little boy, he wandered away from his Dayton, Ohio, home. When his mother could not find him, she called the police. He was located in downtown Dayton by a police officer whose last name was Plummer. The officer pinned a badge on the boy, put his hat on him, gave him some candy, and drove him home in his patrol car. That experience so impressed him that Kincaid decided then and there that he wanted to be a police officer. His father was also employed in the police department at that time, in security work.

A second event that cemented his desire to be involved in police work also came when he was still a young boy. While working his route as a newspaper boy when he was 11 or 12 years old, Kincaid was accosted by several older boys.

“They took my newspaper money,’’ he recalled. “That is a cold case I am still working on.”

Born in Dayton in 1937, Kincaid had one brother and one sister, both of whom are deceased. He graduated from high school there, and decided to enlist in the Air Force, where he served for six years. He explained he was in active duty for four years and in the reserves for two more.

Basic training took him to Sampson Air Force Base in Geneva, New York, and after that, he was transferred to Montgomery, Alabama. “That was in 1956,” Kincaid said, “and segregation was in the spotlight there at the time. Black and white people were separated, having to use different restrooms and not eating in the same restaurants. It was very pronounced and different from the situation in the northern states.”

He served in Korea for one year. Upon returning to the states, was stationed for two years with the Strategic Air Command at Loring Air Force Base in Limestone, Maine. “This base was for the B-52 bombers, and the KC-97 and KC-135 refueling aircraft. It was home base for the 42nd Bomb Squadron,” he recalls.

In the reserves, Kincaid was able to return to his hometown. His father told him that the City of Dayton was accepting applications for the police department. He wanted to work with the public, so he took the test, was accepted, and trained at the Dayton Police Academy for 11 weeks.

During his ensuing 30 years with the department, he spent 22 years in the detective section in the Criminal Intelligence Unit. That included work with the Homicide/Robbery Squad for 16 years, where he became supervisor of that division, the auto theft squad and other assignments.

“I was in the Internal Affairs Unit for a while, where we ‘police the police.’ No one likes those people,” he quipped. During his last three years with the police department, he was supervisor of training at the police academy.

Ironically, 13 or 14 years after he started working with the police department, he once again met the police officer who had “rescued” him as a little boy. Mr. Plummer was working as a jailer at the time. “I never forgot him or his name,” Kincaid said.

During his time in Dayton, Kincaid graduated from Sinclair Community College with an associate degree, and then from the University of Dayton with a bachelor of science degree in criminal justice.

“I was 40 years old when I got my degree,” he proudly exclaimed.

Following his retirement from police work, Kincaid owned a private detective agency for three years, after which he worked with a national security agency doing drug undercover work, time studies, executive protection. He was also the director of investigations.

Kincaid and his wife, Barbara, celebrated 36 years of marriage on Nov. 1. They both brought one child into the marriage. Kincaid has a daughter Rhonda, who lives in the Dayton area. Barbara has a son Michael, who also lives in that area and has two children, Garrett, who lives in Dayton, and Kristin, who lives in Texas.

The couple lived in Sarasota for five years when Barbara, who was a certified public accountant, was offered a job in Dallas. She could not refuse the position, and they lived there for five years before deciding to move back to Ohio. The pair bought and lived in a motor home full time, traveling all over the United States and Nova Scotia. Returning to Ohio, Kincaid began working as an investigator with the Cold Case Unit of the Miami (Ohio) Valley Regional Crime Laboratory.

During that time, the couple lived in their motor home in Arizona during the winters and spent summers in Ohio before they bought a house in Arizona. While living in Arizona, Kincaid volunteered as a cold case investigator with the Apache Junction Police Department for seven years and was awarded the medal of excellence by the department for his work in helping to solve a 25-year-old cold case.

Missing their family, the couple decided to move to Ocala in 2019 to be a little bit closer.

“We did not want to go back to Dayton,” Kincaid said, adding, “We are about 1,000 miles closer to our family than we were when we lived in Arizona.”

“It is an active senior lifestyle that offers amenities we enjoy, including golf, bocce ball, trivia night and cornhole games,” he added. The couple enjoys walking at Shalom Park nearby and watching horse races and going to nearby casinos.

Kincaid is currently involved with the Marion County Sheriff’s Office’s Cold Case Unit, which he enjoys.

Kincaid was inducted this October into the Dayton Amateur Softball Association’s Hall of Fame. Over his 40-plus years of involvement with the group, he has been a player, manager, and an umpire and was the director of the National Police Softball Tournament from 1973 to 1985.

While in Dayton to receive the award, Kincaid said he was privileged to officiate the wedding of the couple’s grandson Garrett. He had also officiated previously at granddaughter Kristen’s wedding.