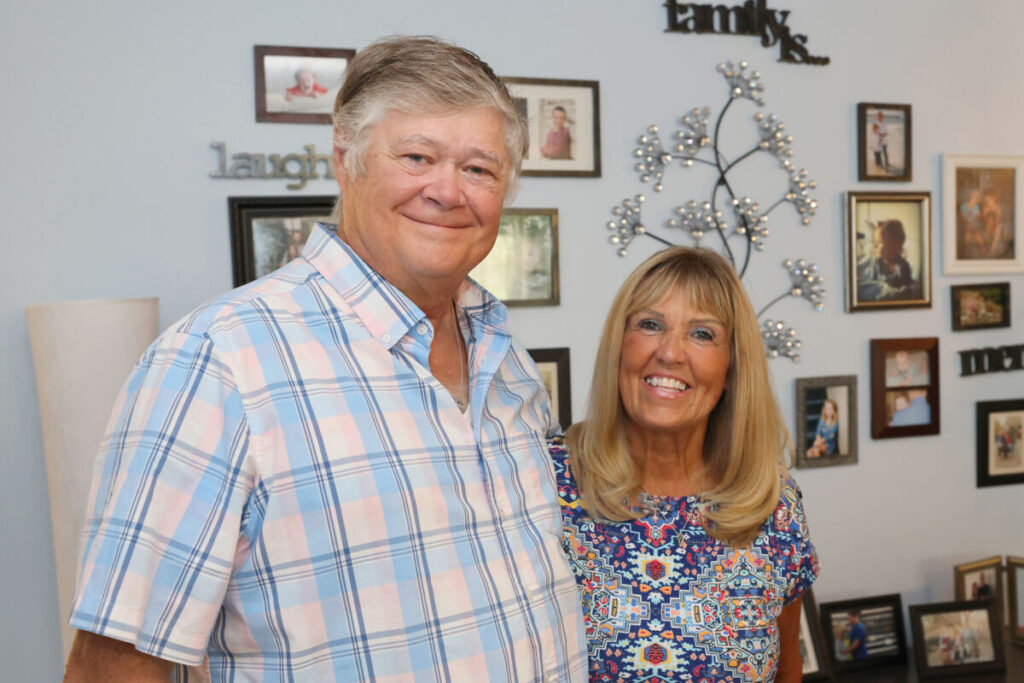 Jim and Wendi Moore have become a very active couple in Ocala in the year they have lived here. They enjoy all the amenities the On Top of the World community affords, as well as other parts of Ocala and Florida.

Their life story reads like a storybook romance, with some drama mixed in.

Wendi lived in Salt Lake City, Utah, where her ancestors migrated from Denmark and Sweden. In her professional career, Wendi was a flight attendant for 16 years with SkyWest Airlines.

“That was the most fun job you could ever have,” she said. She traveled the world, her favorite international destination being Ireland. “It truly is the land of the green. Everything is such a vivid green…the grass, trees…I loved the old castles and all the history, Irish singing, and the people are so nice,” she exclaimed.

Her favorite American place to visit is Memphis, Tennessee, where she has visited Elvis Presley’s home, Graceland, many times.

Wendi married and divorced. The couple has three children—a son, Cole, 41; and two daughters, Tyree, 39, and Haleigh, 37. They have 10 grandchildren.

In the meanwhile, across the country, Jim, who was born in Columbus, Georgia. He spent 20 years in the Army, serving in Turkey, Georgia, Maryland, and Ohio, and then a year in the Florida Army National Guard in Miami. His last tour of duty was during Hurricane Andrew 30 years ago. He has several family members who live in Florida.

After his Army career, Jim moved to Texas to help his brother for a time and managed a small hobby store for him.When his mother needed assistance, Jim moved back to Columbus to help care for her. Jim married and has two daughters, Marci, 47, and Betty Jo, 42. He has two grandchildren. He lost his wife to cancer.

In Georgia, Jim worked for Columbus State University for 10 years, where he designed classrooms and offices for the university and maintained blueprints of the infrastructure. He was also a locksmith there. It was about three years before his retirement from the university that he met Wendi.

Wendi’s daughter Haleigh had married and moved to Columbus with her husband. While there, Wendi went to visit them one Christmas and went roller-skating with her grandchildren. At the rink, Wendi fell directly on her elbow, crushing it and damaging her  shoulder and rotator cuff. She had  four surgeries and ended up staying in Georgia for two years during the healing process.

Wendi explained she made some friends there and attended the baptism of one of her friend’s adult brothers, not knowing who the brother was. It turned out to be Jim. The friends invited the two to lunch that day, and they “have been together ever since,” Wendi said with a smile.

Geography made things difficult for awhile as Wendi had to return to her home in Utah and Jim worked and lived in Georgia. After making a trip to Utah to visit Wendi, Jim invited Wendi to visit his family in Georgia. When she got to the airport, Jim was carrying a huge sign that said, “Wendi, will  you marry me?” She immediately accepted, but geography was still an issue. Wendi said she told Jim she would live in Georgia until he retired in three years, and then he was to move to Utah to live there. He readily agreed.

After the retirement and Jim moving to Utah, the couple decided they wanted to move to Florida. They have been here for 13 months.

Why Ocala? The couple thoroughly researched the area and noted its high elevation with the fewer chances of direct hurricane involvement. They love to visit Ormond Beach, and its easy drive there. They are avid kayakers and love all the springs nearby. St. Augustine is a favorite destination.

At On Top of the World, they enjoy partner dancing with a group called “Sidekicks,” they play cards and Wendi enjoys water aerobics. They enjoy activities and theater productions at Circle Square Commons. The couple enjoys a timeshare in Orlando and plan to spend Thanksgiving there with some of their family members. They enjoy Sea World.

Jim’s hobbies include art in several forms. He enjoys painting, mostly landscapes, with oils, acrylics, watercolors, and pen, and sells some of his works in Georgia and other locations. Additionally, he enjoys photography and working with clay and is part of the Woodworkers group at OTOW.

Both participate in the Scandinavian Club at OTOW, Wendi having Danish and Swedish roots and Jim’s ancestors (about seven generations back, he said) came to America as indentured servants from Norway to Virginia prior to the American Revolution.

Both Wendi and Jim are active in their faith at the Ocala First Ward Church of Jesus Christ of Latter-day Saints.

In the fall, they’re planning a sightseeing trip to Savannah, Georgia, and South Carolina. “We have so much fun,” they agree.