Guinn eyes another term as mayor 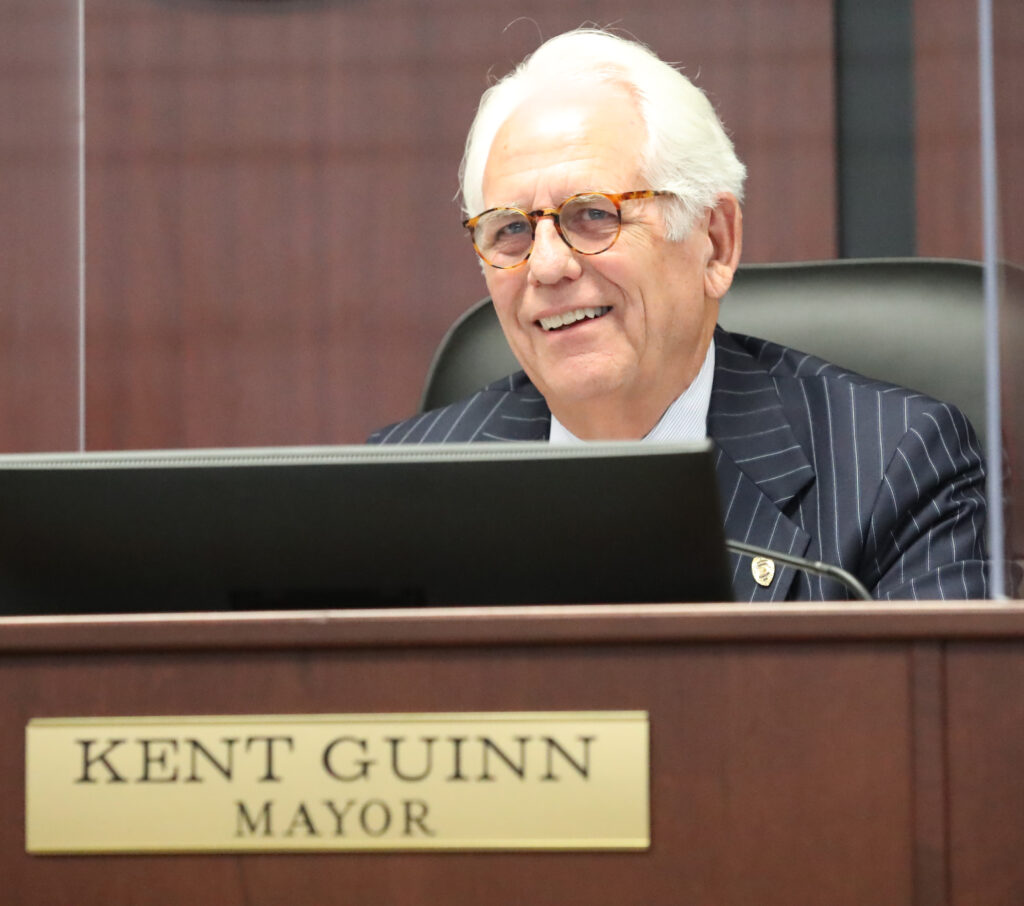 First elected Ocala mayor in 2011, Guinn will seek re-election for his sixth term in September, he announced on Wednesday.

“We came here together and we can leave together,” Guinn remembers Graham telling him. “That was our plan.”

Mike Balken replaced Graham as chief of OPD in November. Guinn wants to support him through his first year at the helm. OPD has more than 200 officers.

“There’s too much going on not to run,” Guinn said. “The biggest thing that factored in was the men and women of the police department. I just can’t let them down. I got to make sure that they’re protected.

“I can’t roll the dice and think that some other mayor is going to come in here and keep Chief Balken, continue to do the same things I’m doing as far as letting them do their job. You know, be aggressive, but be respectful. Those guys and gals are the best of the best of the best, I think.”

Guinn is also excited to be a part of former state attorney Brad King’s new endeavors.

King, who served as state attorney for 32 years before stepping down at the end of 2020, will be working with OPD.

“To have a guy like that, probably the top prosecutor in the State of Florida, working with the police department… that’s just a wealth of knowledge that we can have,” Guinn said. “And I want to be a part of that. Big time.”

Guinn credits the Ocala CEP for its work in expanding Ocala and bringing employers to the area. Guinn has seen an influx of visitors from California, New York, New Jersey and Pennsylvania.

But accommodating the influx has its challenges.

Guinn acknowledges Ocala’s housing shortage. And it’s something he wants to try to tackle.

“It’s just a lot of growth happening,” Guinn said. “All of those are good things. Those are good problems to have. People would love to have the problems we have. Any city in the country would.”

Guinn admits that he weighed the decision for a while.

It’s been a tough year for the 66-year-old. He battled a serious case of COVID-19 in January.

Right now, he is the only one running for the office which comes with a two-year term.

In addition to the mayor’s post, council seats for District 1, District 3 and District 5 are also up for election.

District 1 and District 3 incumbents, Brent Malever and Jay Musleh, have confirmed they will run for re-election. Neither is facing a challenger so far.

Current Council President Justin Grabelle, who represents District 5, will not see re-election. Greg Steen is the only candidate to file for the seat as of March 31. Prospective candidates have until noon on July 16 to qualify for the election.