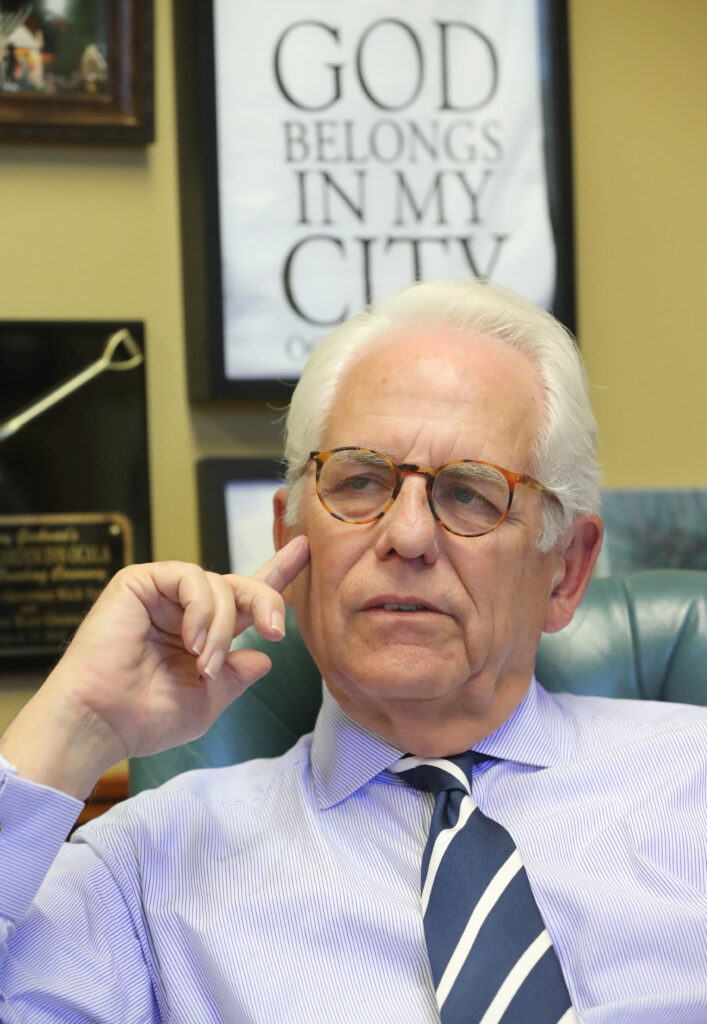 Ocala Mayor Kent Guinn is shown in his office in this Dec. 8 file photo. Guinn recently went through a bout of COVID-19 that put him in the hospital for five days. [Bruce Ackerman/Ocala Gazette]

Mayor Kent Guinn thought he was going to die.

In January, the 66-year-old tested positive for COVID-19. Within days, his oxygen levels dropped to dangerous levels. He spent five days in the hospital contemplating his mortality.

“I don’t want to die. I’ve got too much stuff to do,” Guinn recalled thinking to himself.

On Monday, Guinn sat at his desk on the second floor of city hall, 14 pounds lighter and with a new set of priorities, none of them political.

First, he admits the virus humbled him.

“It was a very humbling experience… you really understand what’s important in life.,” Guinn said. “And your political views and whether you’re a Democrat or a Republican, or liberal or conservative, makes zero difference in the world. That virus could care less about that.”

He also admits the experience has changed his thinking.

“All these signs you see that are ‘Faith Over Fear,’ you know, that was my problem though. I didn’t fear it. I had no fear of it. When I got it, that faith became so, so, so important,” he said.

But he’s still not convinced mask mandates by the government are the answer.

On Aug. 10, Guinn vetoed Ocala’s mask mandate, arguing it would be too difficult to enforce. The city council overturned the veto allowing the mandate to stand. The emergency order is up for renewal on Tuesday during the city council meeting.

“I just think people should make their smart healthcare choices on their own,” Guinn said. “They probably don’t need the City of Ocala explaining to them how to figure that out.”

After his experience, he hopes to focus more on health strategies that strengthen the community’s defenses against the virus.

“I want to talk about getting our community healthy,” Guinn said. “One of the things that I talked about was who this attacks. Who it attacks are the ones with heart problems, respiratory problems, overweight, diabetic… you know, all of those things. Let’s go on offense, not on defense and let’s try to get healthy.”

Guinn said he likely caught the virus during a meeting on Jan. 7. He didn’t wear a mask during the meeting. It was a near-fatal mistake.

“I know I did something stupid. I was offered a meeting with someone, and I could have done it over the phone. And I said, ‘Ah, I’m invincible. I’ll go.’ And I didn’t wear a mask,” Guinn said.

By Jan. 18, he was hospitalized at AdventHealth Ocala. He only went after coaxing by Ocala Fire Chief Shane Alexander and Ocala Police Chief Mike Balken. That coaxing may have saved his life.

Guinn spent much of his time in the hospital gazing at his blood oxygen saturation levels, which dipped to the mid-80% levels. Healthy people’s blood oxygen levels are above 95%. Anything less than 90% can be dangerous, according to the Mayo Clinic.

Late in the evening when his numbers would begin to fall, Guinn would listen to the band Alabama’s “Just a Closer Walk With Thee” and “Angels Among Us.” He also found comfort in Carrie Underwood and Vince Gill’s rendition of “How Great Thou Art.”

He also watched a lot of Turner Classic movies and a healthy dose of “The Andy Griffith Show.”

He also wants to host an event for local healthcare workers.

During his stay in the hospital, Guinn said the healthcare workers who looked after him, and the 39 other COVID-19 patients on the floor, were lifesavers.

“They were so helpful and so kind. I can’t imagine doing that day in and day out. What a tough job,” he said. “If you see a nurse or healthcare worker out in Publix or wherever, just stop them and say, ‘Hey, thanks for what you do. I appreciate it.’”

Despite being out of the hospital, Guinn is still recovering. A walk around his neighborhood over the weekend was a milestone, he said.

Moving forward, he hopes Ocala will rally in the fight against COVID-19.