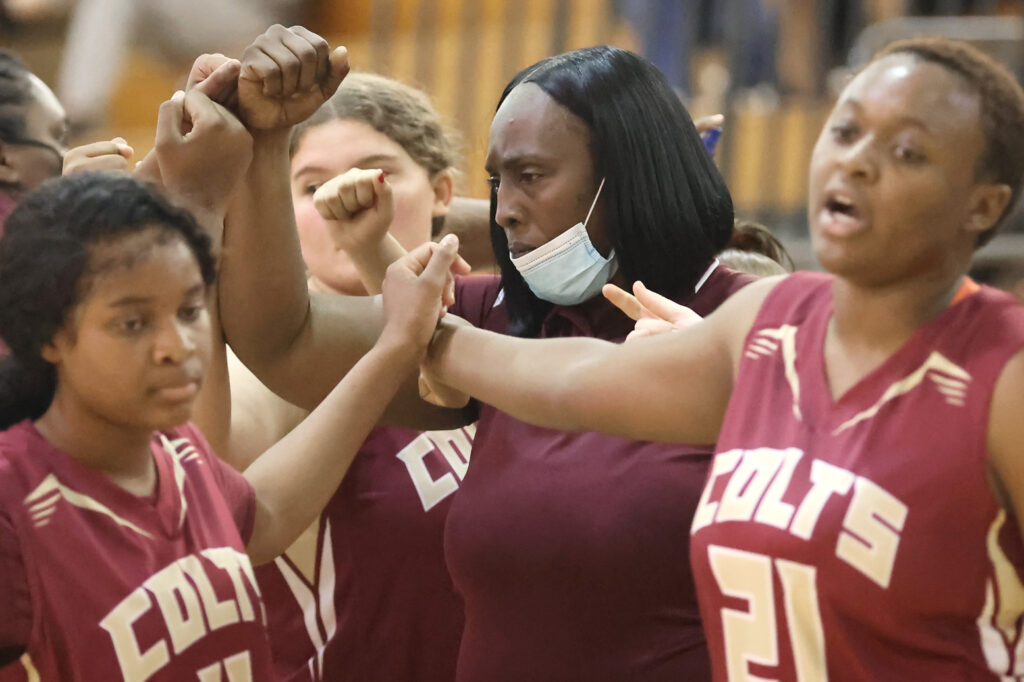 North Marion’s coach Stephanie Brown works with her players on the bench against Belleview during a basketball game at Belleview High School in Belleview, Fla. on Thursday, Dec. 10, 2020. [Bruce Ackerman/Ocala Gazette] 2020.

Belleview junior Laniyah Johnson was a force to be reckoned with in the first half of the Rattlers’ home contest against the North Marion Colts on Thursday night. 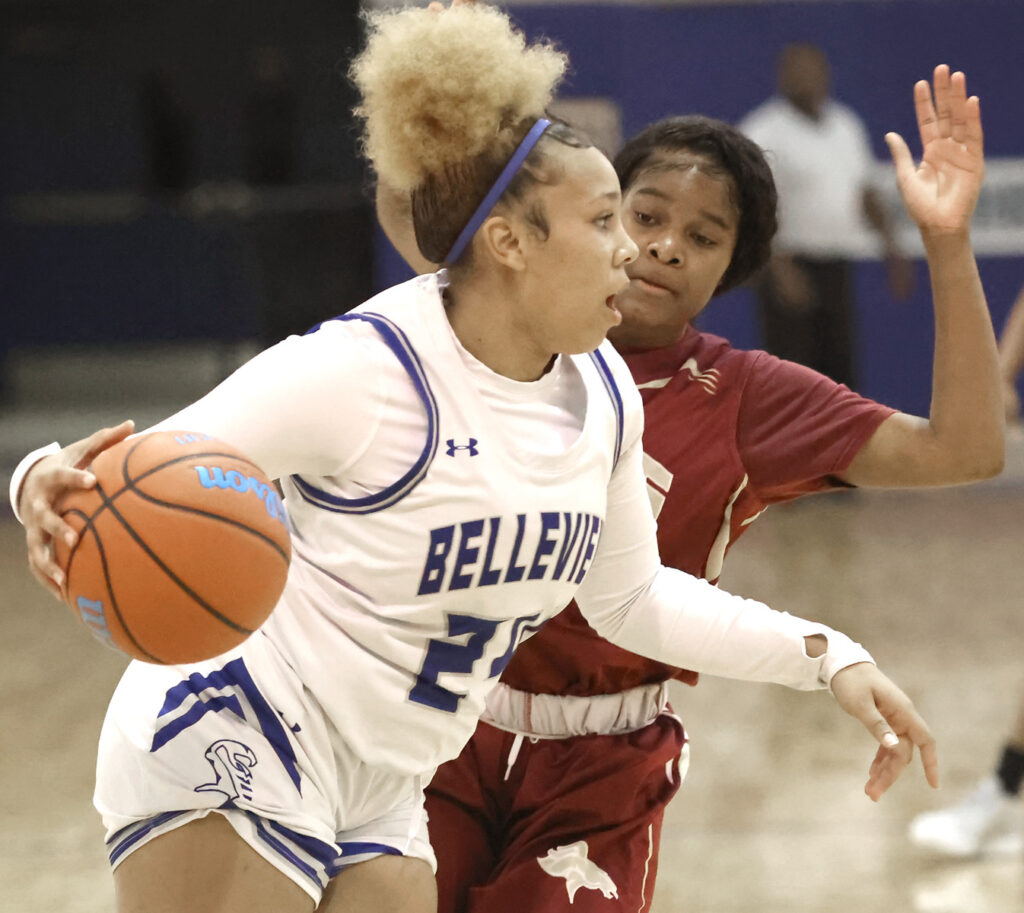 Belleview’s Niya Johnson (24) drives to the basket as she is defended by North Marion’s Erianna Williams (11) during a basketball game at Belleview High School in Belleview, Fla. on Thursday, Dec. 10, 2020. [Bruce Ackerman/Ocala Gazette] 2020.

On the other end of the floor, Stephanie Brown’s North Marion Colts were feeling the effects of Johnson’s triple threat abilities early.

After the Colts clawed their way back into the game after losing 14-8 at the end of the first quarter, North Marion took a narrow 25-23 lead into the locker room.

However, a pep talk, paired with half time adjustments, would ultimately give the Colts the ammunition they needed to pull away from the Rattlers and escape Belleview’s gym with a 51-27 win.

“I went in there and I told them that we gotta keep the intensity up and keep playing hard,” Brown said of her halftime conversation with her team.

Out of the break, Brown used a box-and-one defense to minimize Johnson’s scoring. One of the Colts’ defenders would be assigned to guard Johnson, while the remaining four would play a zone defense.

North Marion also continued to issue a full-court press against Belleview, which is a philosophy of Brown’s.

“We try to slow them down and see what they got first,” Brown said.

Initially, the Rattlers had no problems breaking through the Colts’ press, because, according to Brown, the Colts weren’t “moving their feet like they were supposed to and fouling.” 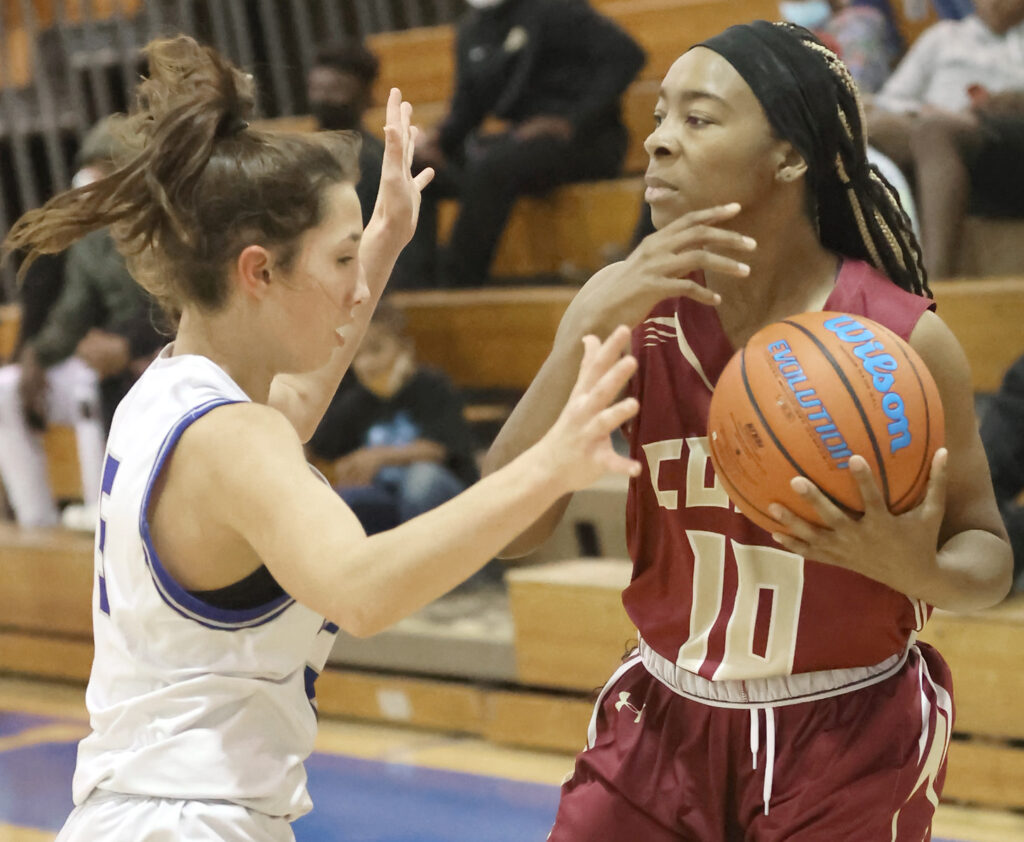 North Marion’s Dynah Johnson (10) looks for a way to the hoop as she is defended by Belleview’s Madison Douglas (5) during a basketball game at Belleview High School in Belleview, Fla. on Thursday, Dec. 10, 2020. [Bruce Ackerman/Ocala Gazette] 2020.

The Rattlers (5-4) will get back to action on Dec. 18 as Belleview hosts its Pasta Faire Shootout tournament. Belleview will battle Ocala Christian on Dec. 18 at 6 p.m.