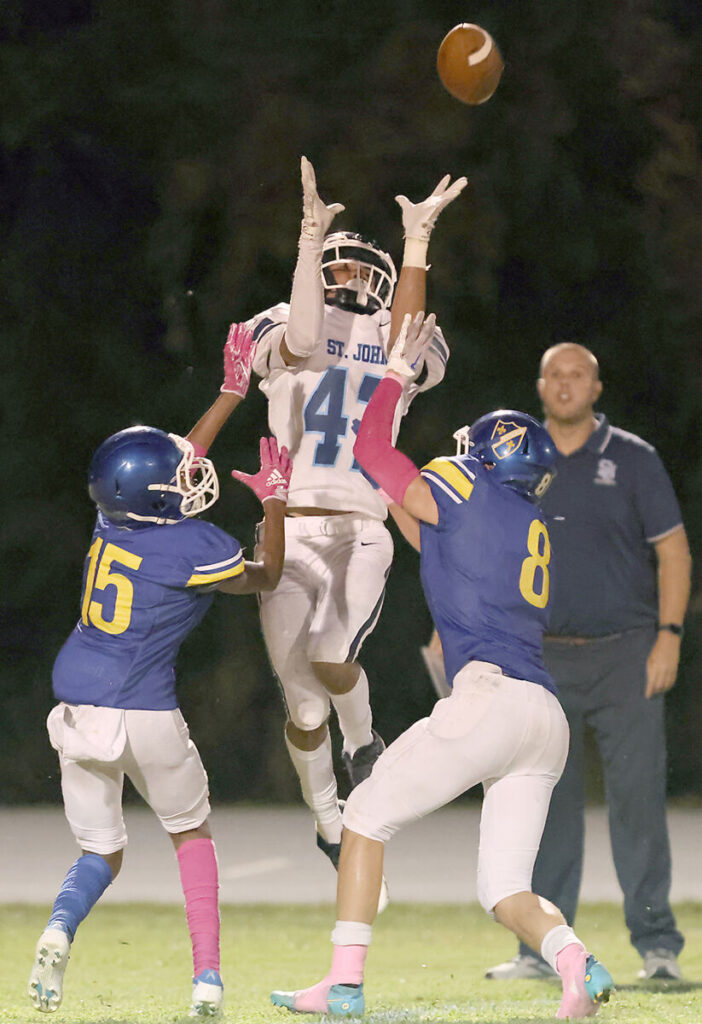 For the Saints and Spartans, it was a defensive-minded battle in the opening minutes as both teams punted in their first two drives. St. John Country Day was able to catch momentum on their third drive as senior running back Trey Dubnansky gained 20 yards on third-and-one to set up the offense at the St. John Lutheran 19-yard line.

Sophomore fullback Caleb Cameron would come in on the next play and gain 18 yards before punching into the endzone for a 1-yard touchdown, with the extra point attempt sailing wide left, St. John Country Day held a 6-0 lead late in the first quarter.

Following three more punt from the two offenses, the St. John Country Day offense once again turned to their ground game as Cameron gained 16 yard on fourth-and-inches. Three plays later, eighth grade wide receiver Ian Mamea took a jet sweep to the right sideline and dashed to a 45-yard touchdown run to extend their lead to 13-0.

“He’s a playmaker, he has only played in five games for us, and he has nine touchdowns already. Obviously, you could see what he does with the ball in is hands.,” he said.

The St. John Lutheran offense found a spark following the Mamea touchdown as senior quarterback Landon Pindell hooked up with junior wide receiver Trace Dyess for a 29-yard gain. Following a sack by Cameron, Pindell would connect with senior wide receiver Devin Ademyk for a 15-yard completion and then went back to Ademyk down the left sideline for a jump ball, which Ademyk caught for a 27-yard touchdown with less than 20 seconds left in the half.

“It felt great, I have to give the quarterback props for the throw. Him and I are starting to build good chemistry and it feels good to come through for him.,” Ademyk said.

After St. John Lutheran was forced to punt to open the second half, St. John Country Day was grinding out a drive into Saints territory when junior defensive end Marshall Foster came up with a big sack to kill the drive and force a punt.

St. John Country Day would get the ball back to their offense and Mamea made another big play by winning a jump ball for a 23-yard reception. His efforts would be in vain as a 26-yard field goal attempt was short.

Following a multi-sack drive from the Spartans defense, Dubnansky found an open lane on the right side and scampered to end zone for a 30-yard touchdown to give his team a 19-6 lead with just under seven minutes left in the game.

Bantag was all smiles after the game as his team moves to 4-2 on the season.

“Proud of both teams playing their hearts out. I’m proud of our boys because we have a lot of injuries and they put it aside and the ones on the field fought hard.,” he said.

Cameron and Dubnansky were the heart of the St. John Country Day offense on Thursday night as they combined for 21 carries, 140 yards and two touchdowns. The shocking part of the performance is that running back is not the natural position for either player but due to injuries, they are at the top of the depth chart.

“They had to step in, and they found a way to run hard. We knew if we could block them since they put everyone in the box, we could get a fullback in to block their linebacker and find a running lane to squeeze through.,” Bantag said.

For Dubnansky and Cameron, it was all about doing what they could to help the team win.

“If coach wants me to go somewhere, I’ll go somewhere. I just want to help the team as much as I can.,” Cameron said.

As for St. John Lutheran, it is a transition year with new head coach Daniel McLeod and having only four seniors on the roster has allowed many underclassmen to get valuable experience.

“Young football team that is still learning, still trying to progress and get better. It’s a lot of inconsistency and it’s a project.,” he said.

Despite falling to 1-6 on the season, McLeod is confident in his players and the process of building up the program.

St. John Lutheran will move on to host Old Plank Christian Academy next Tuesday at 7 p.m.