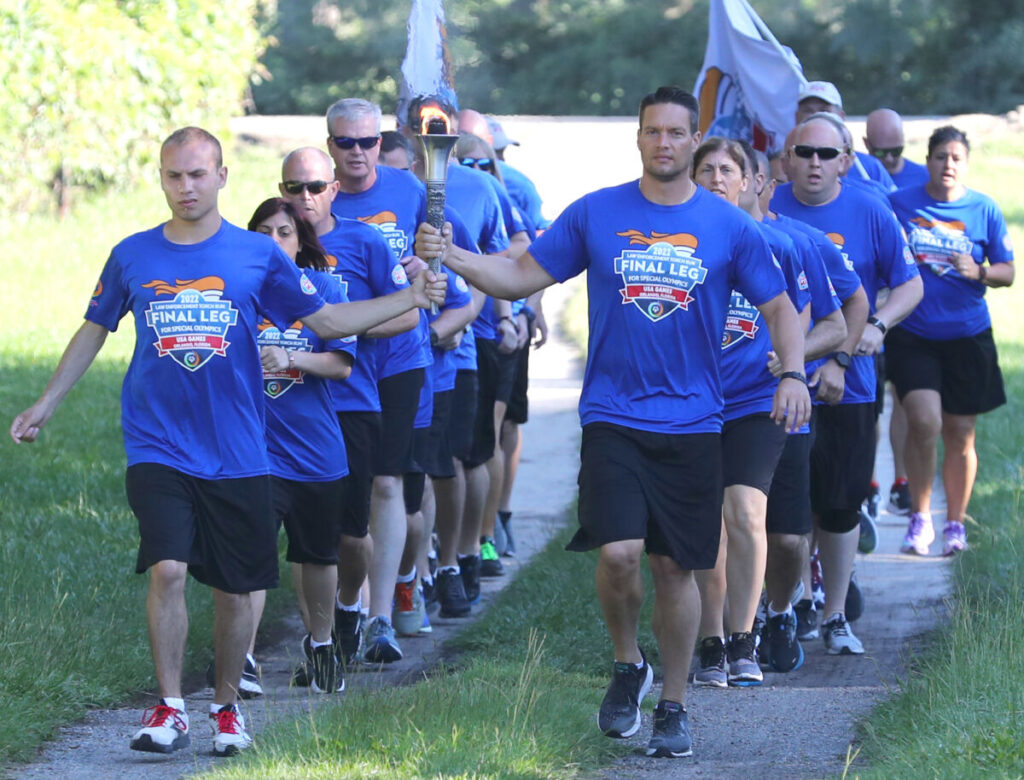 Waiting on horseback inside the spacious covered arena were the five local members of the team that will be representing Marion County in the first-ever equestrian competitions as part of the 2022 Special Olympics USA Games, scheduled for June 5-12 in Orlando. This marks the first time the event has been held in Florida.

The Law Enforcement Torch Run for Special Olympics is the largest grassroots fundraiser for Special Olympics. A small contingent of the more than 100,000 law enforcement members in all 50 U.S. states, 12 Canadian provinces/territories and 44 other countries, along with three athletes who will participate in the games, brought the symbolic torch into the arena on Thursday in what is known as the Law Enforcement Torch Run Final Leg. Also participating in the ceremony was the Marion County Composite Squadron of the Civil Air Patrol Color Guard.

Betty Gray, executive director of Stirrups n’ Strides, based in Citra, is the equestrian coach for Florida’s team in the USA Games. The local equestrians who will be going to Orlando are Ashley Quesnel, Becky Richter, Adam Warch and Kathy Gray, who is Betty’s daughter, as well as Alexia McCue, a member of Tomorrow’s Equestrian Center in Morriston, who has been training with the other four at Stirrups n’ Strides.

In addressing the crowd on Thursday, Betty Gray thanked everyone for “coming to participate in this awesome ceremony. As the head coach for the equestrian team of Florida, I am proud of all the athletes who have worked so hard to get ready for this event and let’s wish them all the best luck there is. We are expecting 5,500 athletes and we are so excited to have five athletes we have had in training since last summer. It’s so exciting.”

John Newnan, the Region II Coordinator and Final Leg Committee Chair, was a law enforcement officer in Howard County in Maryland for 36 years. He became involved with the torch run program in 1986.

“We do a lot of things to raise money and support Special Olympics. We have our annual torch runs around the world every year before the Summer Games. We jump in cold water, called the polar plunge; we wait on tables, called Tip A Cop; you name it, we’ll do it, and it’s all on our off-duty time. Since 1981 we’ve raised almost a billion dollars for Special Olympics. Last year, in very trying COVID times, we still raised $40 million for Special Olympics,” he said.

He said the group at Stirrups n’ Strides, which was traveling in a brightly decorated tour bus, was part of a larger group that was making runs on both coasts of the state leading up to their reunion in Orlando.

“We will meet back together later today. We started May 20, a small group of us, in Chicago, where we lit the Flame of Hope at the eternal flame honoring Eunice Kennedy Shriver at the birthplace of Special Olympics. Then we went to Ohio, Connecticut, down to New York, New Jersey, Pennsylvania, Maryland, Virginia… we are constantly on the move, spreading the message of acceptance and inclusion for everybody every step of the way.”

He said that when the flame is ignited in Chicago, it is maintained in a “miner’s lamp.”

“So, every time we do a ceremony, we light that flame off the miner’s lamp so that’s the original flame from the eternal flame and we’ll deliver that to the athletes opening ceremony. We are the guardians of the Flame of Hope,” he said.

Newman said the law enforcement personnel who participate in the torch run program were chosen from agencies and programs in their states.

“It’s an honor to take part in this. It’s a passion for us. We work year-round. This is just one of the things we do, but all these officers work locally in their home programs raising money for Special Olympics. We thought it would be an honor to come here and promote the equestrian games, which is the first time ever and is so historic,” he said.

The triathletes are Adrienne Bunn, Zachary Deonath and Thomas Welsh.

“Adrienne is the number one female triathlete in Florida. She is very, very good,” Robles said. “They will do a 440-yard swim, 12.5-mile bike ride and a 5K run. The swim is a sprint and our athletes are super fast.”

“I am extremely excited and proud of the athletes representing Florida, so proud of everything our local athletes have accomplished and how hard they have trained. I look forward to them having a good time and showing us what they can do,” he added.

Founded in 1968, Special Olympics is a global movement to end discrimination against people with intellectual disabilities and foster acceptance of all people through the power of sport and programming in education, health and leadership. Special Olympics Florida provides year-round sports training and competition in a variety of Olympic-type sports.

As part of the ceremony on Thursday, Kathy Gray rode her mount, Lily, to the front of the arena and, in loud and firm voices, she and the other members of the equestrian team recited the Special Olympics athletes pledge: “Let me win, but if I cannot win, let me be brave in the attempt.”

To learn more, including how to follow the games on social media, go to 2022specialolympicsusagames.org and specialolympicsflorida.org