Marion County gathers together in support of women. 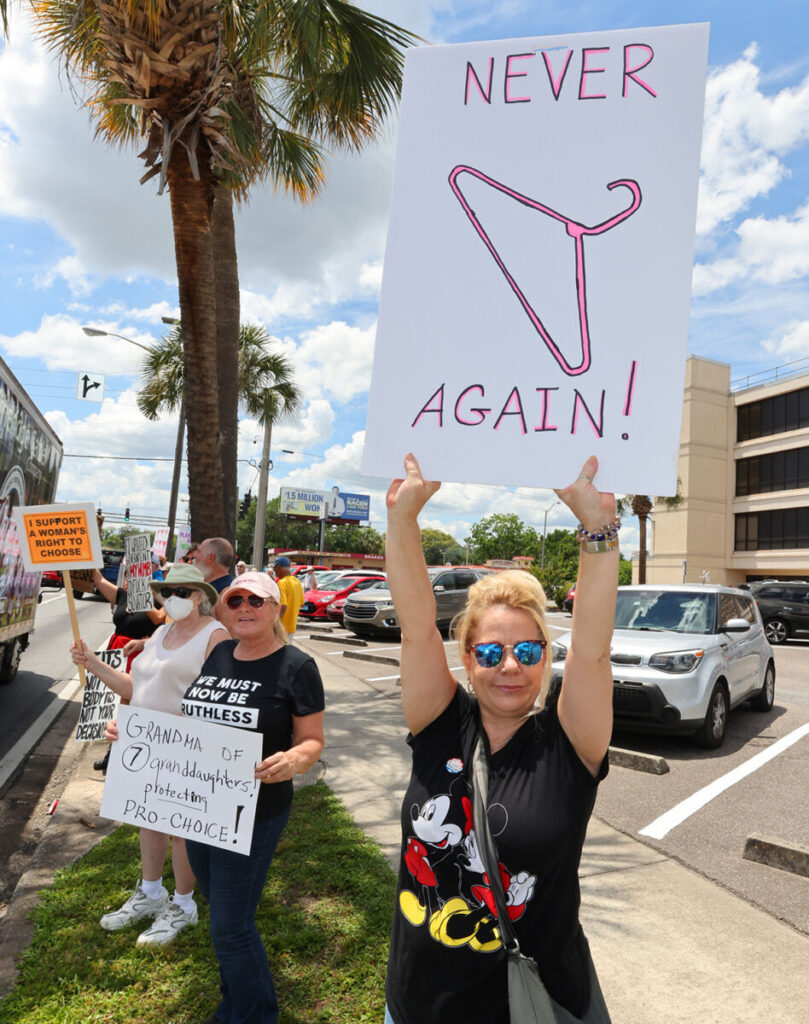 Tara Eason, right, and Carole Walker hold signs as they protest with hundreds of other Pro-Choice protestors in downtown Ocala, Fla. about the possible Supreme Court overturning of the Roe v Wade ruling on Saturday, May 14, 2022. [Bruce Ackerman/Ocala Gazette] 2022.

Nearly 200 people gathered in downtown Ocala Saturday afternoon to demonstrate their support of women’s reproduction rights in the wake of a recently leaked draft Supreme Court opinion that would strike down Roe v. Wade’s protection of a woman’s right to have an abortion.

The Bans Off Our Bodies rally at the corners of Pine Street and Silver Springs Boulevard and Pine Street and 10th Street/State Road 200 was part of a series of similar rallies nationwide Saturday aimed at pushing back against efforts to overturn the Supreme Court’s landmark 1973 decision.

The local rally was led by Pam Escarcega of the National Organization for Women (NOW) of Greater Marion County and Francine Julius Edwards, regional chair of the Democratic Women’s Club of Florida.

Ms. Julius Edwards explained that while this was a successful rally, many of the women involved had over the years fought for the ERA, for women’s rights and Roe v. Wade and “are not happy to have to rally again because it is not ‘settled law.’”

The crowd included both women and men of all ages. Many of the participants voiced concerns about what impact the court ruling, if it goes forward, would have on a woman’s right to determine the most appropriate outcome for her pregnancy.

“I’m here for my daughters,” said one woman holding a placard reading: Bans off my daughter’s bodies. Two younger women said the leaked opinion disturbed them so much that, “Even us introverts came out in support (of women’s right to choose).”

Many passing motorists expressed their views with vigorous horn honking, motor revving and flashing thumbs up. Three counterprotesters stood nearby, facing away from the rally and waving their own placards.

Reactions to the draft opinion written by Justice Samuel Alito have exploded across the country following its release by the news site Politico earlier this month. The court’s final ruling is expected to be released within the next two months.

Pro-Choice Rally Draws Hundreds In Ocala. Hundreds of Pro-Choice protestors held signs and waved to motorists in downtown Ocala, Fla. about the possible Supreme Court overturning of the Roe v Wade ruling on Saturday, May 14, 2022.