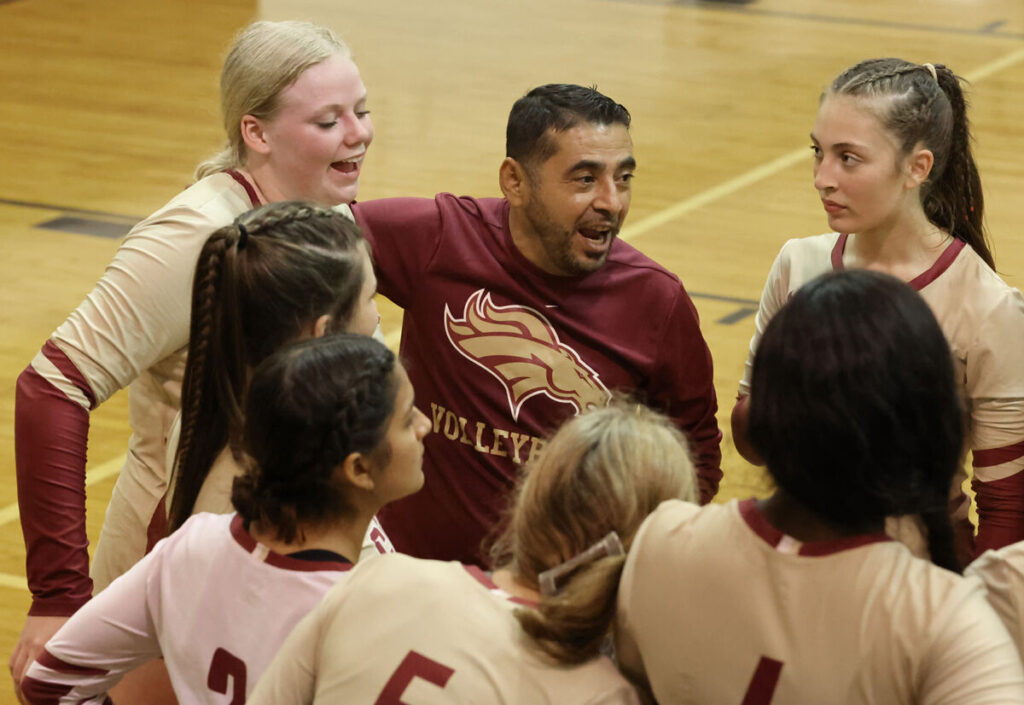 North Marion’s coach, Richard Guerrero, works with his players on the bench as they play Lake Weir during a volleyball match at North Marion High School in Citra, Fla. on Thursday, Sept. 1, 2022. The Colts defeated the Hurricanes in straight sets. [Bruce Ackerman/Ocala Gazette] 2022.

North Marion utilized its height advantage and athleticism to ease past Lake Weir by scores of 25-12, 25-17 and 25-17 on Thursday night.

The win improved Class 4A North Marion to 3-1 on the season.

“It was a good match and all the girls got a chance to play and improve,” said Colts coach Richard Guerrero. “The girls played hard and it’s always good to see them working together as a team and clicking on all cylinders. We have some veterans on the team and some youth and the girls help and support each other. They don’t care who’s playing, they just want to get better.”

The loss dropped a very young Class 4A Lake Weir squad, which has only one senior, to 0-4 overall.

“I have a very young team,” said Hurricanes coach Jenna Dupleffis. “I have one senior and the rest are freshmen, sophomores and a couple of juniors. Our serve-receive was a little bit of a struggle, but North Marion has some really good servers. The girls are working hard to improve and I’m really proud of them.”

North Marion came out strong in the first set and jumped out to a 13-5 lead as Jadair Montoya had two of her team-high six kills to go with a pair of service aces.

North Marion continued to dominate the action at the net as senior outside hitter Jasmine Burkey found holes in the Lake Weir defense with well-placed kill shots. A block by Nehemiya Smith and a spike by Brooke McConnell sealed the first set win for the Colts.

Lake Weir came out focused for the second set and took an early 3-0 lead as Izabella Pinkerton scored with a couple of well-placed shots.

The teams battled on even terms from there as the score was tied at 11 before North Marion steadily pulled away as Montoya had two kills and a serve ace, and Lainee Hall added a pair of kill shots to give the Colts a 23-16 lead.

Lake Weir committed a net violation and Monotya drilled a cross-court kill shot to put the Colts up 2-0.

The second set loss seemed to delate Lake Weir and North Marion took full advantage in the final set by storming out to a 13-2 lead sparked by McConnell, who had two of her team-high five aces, and Kendall McCubbin, who had three of her team-high six kills.

Lake Weir refused to fold and rallied as Kyra Rigozzi sparked a nice run with excellent serving and King added several winners to pull the Hurricanes within 20-15.

Several long rallies ended up going to North Marion and McCubbin and Smith combined for a block to put the Colts on match point. Another long rally ensued before Molly Barlow’s perfectly placed shot found the floor to give the set and match to the Colts.

“I just want the girls to get better every day,” coach Guerrero said. “That’s always my expectation and as long as we’re better today than we were yesterday, I’m happy.”

North Marion is back in action on Tuesday night with an away match against Forest.

Lake Weir, which will host Dunnellon on Tuesday night, will continue to concentrate on the fundamentals. The Hurricanes will no doubt continue to improve with each match they play.

“The girls are amazing and I’m very proud of them,” coach Dupleffis said. “They are young, but they’re very coachable and they really want to improve.”