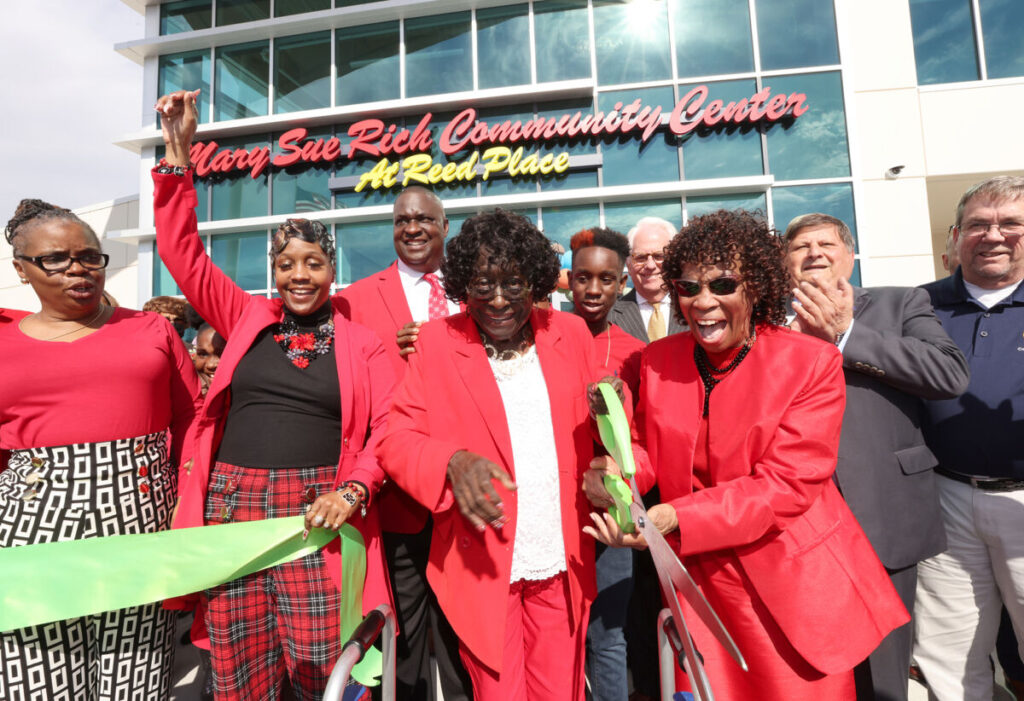 Mary Sue Rich, 4th from left, and Ruth Reed celebrate together after cutting the ribbon during the ribbon cutting ceremony for the Mary Sue Rich Community Center At Reed Place in Ocala, Fla. on Tuesday, Jan. 10, 2023. [Bruce Ackerman/Ocala Gazette] 2023.

A bright morning sun beamed down on hundreds of people gathered Tuesday, Jan. 10, for the ribbon cutting ceremony to dedicate the Mary Sue Rich Community Center at Reed Place. But neither the suns rays nor the lime green ribbon could be outdone by Mary Sue Rich and Ruth E. Reed—both beautifully outfitted in bright red attire—and the absolute shining stars of the festive event.

The naming of the new community center and the property on which it sits are designated in honor of Rich, a longtime Ocala City Councilwoman, and Reed, a retired teacher and community activist who led a years-long campaign against pollution from the Royal Oak Charcoal plant and campaigned for citizens of the area to have the right to breathe fresh air.

On Tuesday, Rich and Reed were front and center in a ceremony to pay tribute to their leadership and advocacy and to show off the impressive new community resource.

It was a long road that led to the special day.

Rich represented District 2 on the Ocala City Council, in which the former charcoal plant was located, from 1995 to 2019. Seen as an asset in 1975, when it opened and provided jobs, the plant was later considered to have a detrimental effect. Residents said soot and ash covered their vehicles overnight and coated the outsides, and sometimes even seeped into the interiors, of their homes. Though not proven medically, many residents who developed chronic respiratory conditions or cancer blamed their health issues on the emissions and pollution.

Reed has lived just down the road from the site of the plant for years. In 1996, while beginning to investigate the plant’s permitting and alleged infractions, she formed the Neighborhood Citizens of Northwest Ocala (NCNO) advocacy group.

“We were determined that we were going to do something about it. We were tired of living like that for over 30 years. We had a right to clean air, a right to breathe,” she said, adding that they finally “began to catch them not doing what they were supposed to do.”

The group got some grant money and got in touch with a national environmental organization and lobbied to have the plant clean up its operation. The City Council wrote letters to the Department of Environmental Protection and elected officials. The DEP found nine potential violations, including that the plant was emitting a hazardous amount of the pollutant methanol and not reporting it in permit applications. Additional violations also were found. In December 2005, the Roswell, Georgia-based Royal Oak Enterprises announced it would close the plant by the end of February 2006 due to higher operating costs and environmental issues caused by the poor quality of the raw materials used in the production of charcoal, reports stated.

Taking the microphone on Tuesday, Reed told the audience, “I couldn’t breathe at night without putting a washcloth on my face.”

She recounted some of the challenges and thanked God for the end result and for the beautiful day.

“I never shall forget this moment and this hour,” Reed said.

“I am so, so honored,” Rich said when she addressed the crowd, which applauded loudly several times during her remarks.

Yvonne Hayes Hinson, State Representative for District 21, which includes part of Marion County, spoke about what she said was an “incredible community center, named after two incredible leaders and change-makers.”

Speaking to Rich, she said, “You are a pillar in this community and the generations to come who will use this center will know your name. This indeed is a wonderful legacy.”

Hinson also said she planned to soon host resource meetings at the center for “returning citizens” and said to Rich, “I know your passion for parolees. We are going to be talking to them about how to get their fees paid, how to apply for housing, how to get jobs, get trained for jobs, the whole nine yards,” to which the audience and Rich responded with applause.

“Ruth Reed,” she continued, “we thank you for your efforts and advocacy for the land this center is built on. It takes a special sense of duty to put the word in to make this kind of change.”

“This is an investment in our future,” Hinson added. “It’s a place of education, of health, of empowerment and enrichment.”

Hinson also hinted at hoping to move her office to the new center in the future.

The ceremony included a number of other speakers, such as county and city officials. As soon as the speeches ended and the green ribbon was snipped, droves of people poured into the front doors of the center.

The Sankofa Public Library is an official branch of the Marion County Public Library System. Sankofa is a West African word described as a symbol of taking from the past what is good and bringing it into the present to make positive progress through knowledge.

To fund the center, the city paid $8 million from reserves, through a 20-year loan with a 2 percent interest rate. Another $2.3 million came from the Marion County Hospital District, which will oversee nutrition and health initiatives at the center through its Active Marion Project and Fitness and Nutrition in Schools.