Gallery: Mistakes catch up to Forest as they fall at home to Lake Minneola 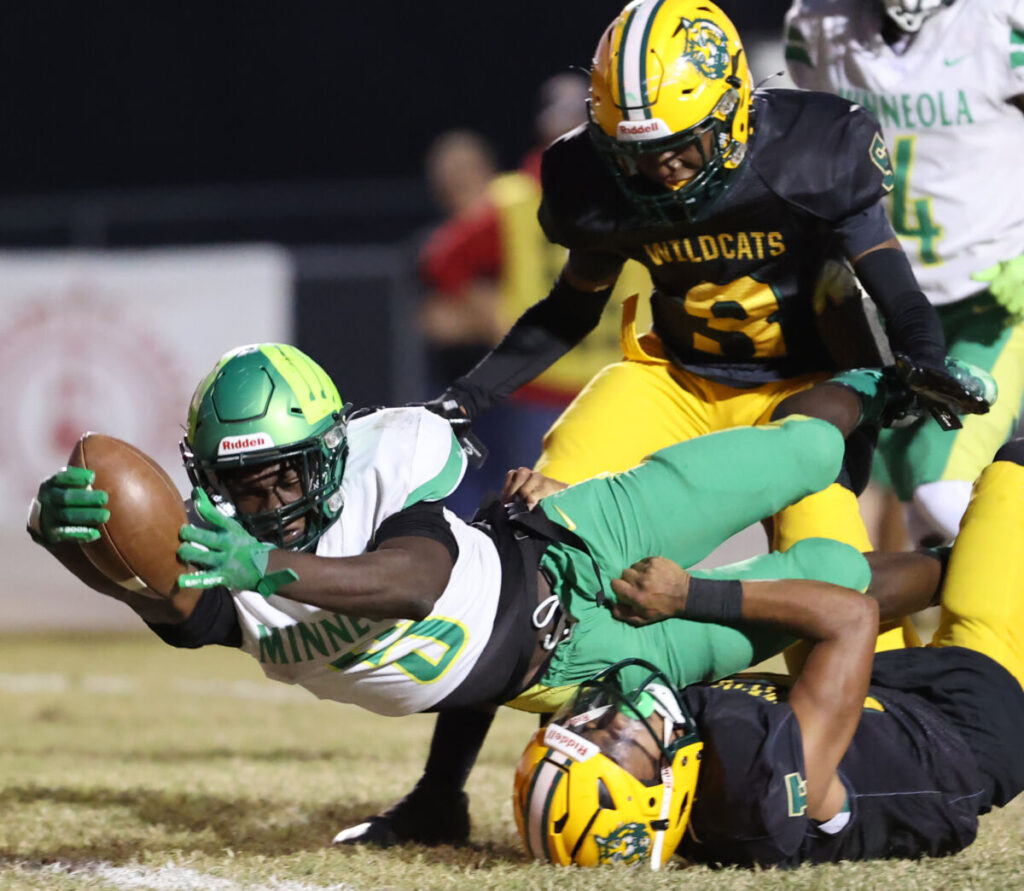 Lake Minneola’s John Celestin (5) dives into the end zone for a touchdown ahead of Forest’s George Bryant (3) and Isayah Osbourne (5) who can’t stop him during a football game at Forest High School in Ocala, Fla. on Friday, Oct. 21, 2022. Forest lost to Lake Minneola 35-7. [Bruce Ackerman/Ocala Gazette] 2022.

The Forest Wildcats hosted the Lake Minneola Hawks on Friday night as the two teams faced off for the 4-Suburban District-5 championship at Mikey Kelly Field.
Forest carried a wave of momentum into the game with a three-game win streak and donning black jerseys for the first time in school history.
Lake Minneola would come out swinging as they drove 70 yards on an opening drive that ended with a five-yard touchdown run from senior running back John Celestin. The Forest offense got off to a good start as quarterback Vimel Poole Jr ran for 12 yards and a first down on the first play from scrimmage.
Facing a third-and-one, Lake Minneola’s defense came up with their first big play of the night as junior middle linebacker John Stubbs tipped Poole’s pass to himself and ended up with his first interception of the season.
Stubbs’ interception would lead to a 12-yard touchdown run from Celestin just three plays later to extend the lead to 14-0.
“We just wanted to come out aggressive and be unstoppable.” Stubbs said about the defense.
Following Celestin’s second touchdown, both defenses forced punts to keep the score 14-0. On the final drive of the first quarter, Lake Minneola drove 55 yards on five carries from Celestin and he would finish the drive with a two-yard touchdown run to extend the lead to 21-0.
Poole and the Forest offense would answer as the quarterback completed passes to Matt Hart and AJ Adams for first downs. Poole would go back to Adams on fourth-and-goal from the nine-yard line for a touchdown, it was Adams team-leading fifth receiving touchdown on the season as the deficit was cut to 21-7.
The ensuing drive for Lake Minneola ended with a turnover on downs because of a fourth down sack from senior defensive end Tae Floyd. It was Floyd’s 16th sack of the season, which set a new school record.
The Forest offense continued to move the ball through the air on an 18-yard completion to Hart and a 12-yard completion to running back Amadrick Hope but an incomplete pass on fourth down ended the drive. Hart led Forest with eight receptions for 55 yards on the night.
Lake Minneola had just over a minute left before halftime to go 70 yards and got to the Forest 10-yard line before time ran out. Senior wide receiver David Ramos had three receptions for 31 yards on the drive.
Forest would open the third quarter with the ball and Poole ran for 11 yards and a first down to start the drive, followed by a 13-yard run by Poole and an 18-yard completion to Adams. The wind would be taken out of the sails of the Forest offense on a sack by Jeremiah Petty.
Forest head coach Eoghan Cullen decided to go for it on fourth-and-nine and Poole was intercepted by Andrew Bowles, it was Poole’s second interception of the night.
The remainder of the third quarter featured punts, turnovers on downs and penalties from both teams as Lake Minneola held a 21-7 lead. Lake Minneola had a huge scare in the middle of the third quarter when Celestin went down with an ankle injury and did not return until the next drive.
The ankle seemed just fine as Celestin ripped off a 40-yard run, followed by a 23-yard reception from junior wide receiver Braylon Knauth. Two plays after the Knauth reception, Celestin would power in from eight yards out for his fourth touchdown of the game on the final play of the third quarter.
“At first, I was nervous and I thought my season was over. I saw that my team needed me, and I just had to fight through it and do the best I can.” Celestin said. The senior was a force by carrying the ball, his unofficial stats were 24 carries, 176 yards and four touchdowns.
Dropped passed continued to plague the Forest offense as there were missed opportunities and Stubbs would put the nail in the coffin with his second sack of the night with just under nine minutes left in the game.
Following a pair of unsportsmanlike conduct penalties by Forest, Lake Minneola would start their drive on the Forest 12-yard line. On the first play of the drive, quarterback Quinn Niemann threw a touchdown pass to Ramos to make the score 35-7. Ramos led the team with four receptions, 43 yards and a touchdown.
Forest would once again turnover the ball on downs and Lake Minneola would run out the final couple minutes for the win and a district championship, their second in school history. Lake Minneola head coach Walter Banks was ecstatic with the outcome as he and his team celebrated by putting on 2022 district champion shirts in the post-game.
“I’m super happy, we went about one and a half quarters acting like we didn’t know how to play football. There were a lot of mistakes on the players and coaches’ side, but I am glad they were resilient and came through.” Banks said.
He added: “It feels great, I tried downplaying it all week, but it was an important game. Really happy for our guys and our school getting our second district championship in school history.”
For Cullen, it was clear what transpired on the field and has to get his team to move on quick with a road game against cross-town rival West Port on the slate next Friday.
“I talked all week to the kids about the team that made the fewest mistakes will win this game. Lake Minneola made the fewest mistakes and they capitalized on our mistakes. At the end of the day, they did a better job and won the district championship.
Cullen expects nothing but great effort and focus in practice next week as they look to get into the playoffs via an at-large bid.
“This is one of the most resilient teams that I’ve ever coached. I expect them to be focused and ready to go on Monday.” he said.