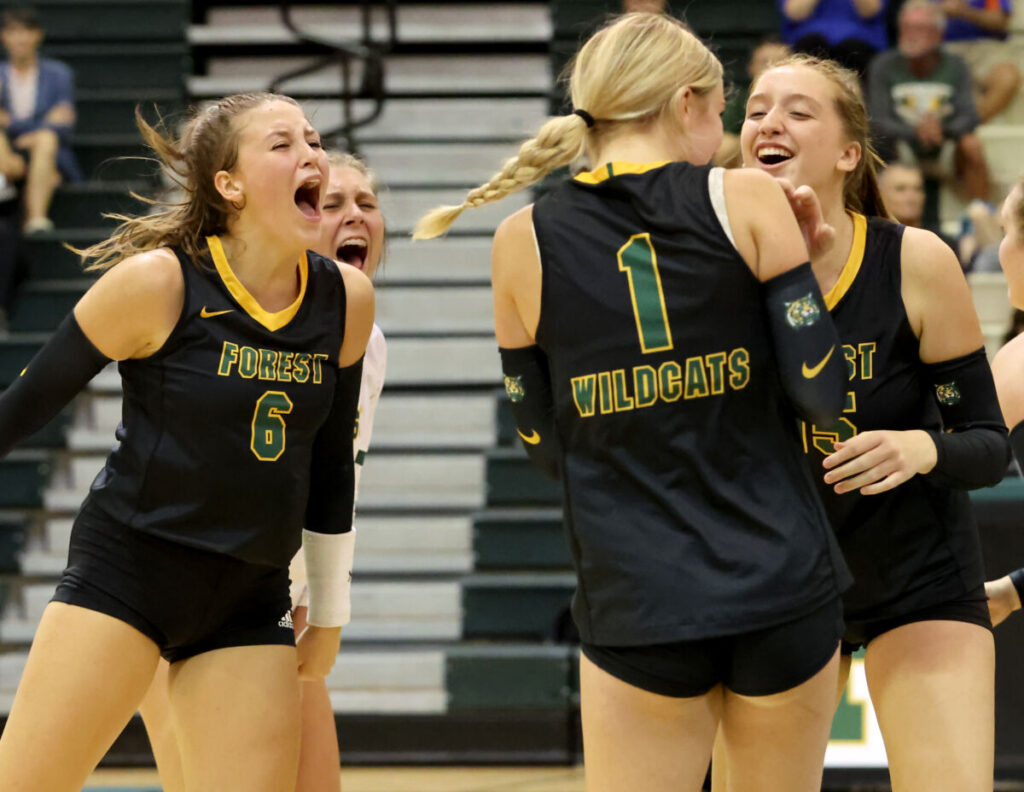 Forest players celebrate a point on Vanguard during a volleyball match at Forest High School in Ocala, Fla. on Thursday, Sept. 22, 2022. Forest won the match in 5 sets. [Bruce Ackerman/Ocala Gazette] 2022.

Home » News
Posted September 22, 2022 | By Mark Pinson/Special to the Gazette
Photos By Bruce Ackerman/Ocala Gazette
The rivalry between Vanguard and Forest began in 1971, and no matter what the sport is, the desire to beat each other is as intense as ever.
That was quite evident in Tuesday night’s volleyball match that went back and forth and lasted a full five sets before Forest earned a hard-fought win over Vanguard by scores of 12-25, 25-22, 25-23, 23-25 and 15-13.
The win, witnessed by a boisterous crowd, evened the Class 6A Wildcats’ record at 6-6 on the season.
“This is the best rivalry in the entire state of Florida for volleyball,” said Forest coach Jimmy Collins. “I am so proud of the girls because we have struggled against good teams finding consistency. Vanguard is a great team and we made so many errors in that first set. I told the girls if we just cleaned it up a little and put some pressure on Vanguard  we could play with them. It was a great match and that fifth set was excellent volleyball by both teams. This win should really give our confidence a boost.”
With the loss, Class 5A Vanguard dropped to 8-7 overall.
“I was expecting a good match and it was a great crowd and atmosphere,” said Knights coach Luis Perez. “Both teams battled the entire match and at the end whichever team made the least amount of mistakes was going to win and tonight it was Forest. Congratulations to them and we will see them again on our senior night.”
Vanguard, which came out clicking on offense in the first set, also took advantage of numerous uncharacteristic mistakes by Forest and cruised to the 25-12 win.
Forest regrouped and jumped out to a commanding 19-12 lead in the second set before Vanguard rallied to pull within 24-22. But junior outside hitter Kailyn Howard drilled a cross-court spike to give the Wildcats the 25-22 victory.
Vanguard took a 14-11 lead in the third set as senior outside hitter Ruby Owen scored numerous points with several of her match-high 28 kills.
Forest answered with a run of points fueled by the outstanding play of Howard, who had a team-high 17 kills, and freshman Allison Hamm, to tie the score at 23.
Howard had a service ace and an attempted spike by Vanguard found the net as the Wildcats held on for the 25-23 win.
Vanguard came out focused for the fourth set and stormed out to an 11-3 lead as sophomore Lillian Hart had several of her 11 kills to go with a pair of blocks and senior Sophia Reed contributed three of her nine kills.
A furious Forest rally closed the gap to 24-23, but Owen hammered a winner down the line to give the Knights the 25-23 win.
That forced a fifth and deciding set played to 15 points.
The quality of play in the final set was excellent, with many great digs and long rallies. The score was tied eight times, the last at 13 all, before Forest junior outside hitter Dallas Papy drilled a winner and sophomore Ava Herren unleashed an ace serve to give the Wildcats the set and match.
“I think the key to the match was the fourth set because we were so far down and even though we didn’t win it we kept fighting and that gave us confidence and the momentum heading into the fifth set,” coach Collins said. “That fifth set was just great volleyball and I’m so happy for our girls because they have been working so hard and we needed a win like that so they could enjoy some success.”
Vanguard, which was without senior outside hitter Emma Ehmann, who is out with an injury, can take plenty of positives away from this match.
“This is a great rivalry and I’m proud of the girls because they fought for every point and played well,” coach Perez said. “
Vanguard is back in action on Tuesday night with a match against Trinity Catholic, while Forest hosts South Lake on Monday night.