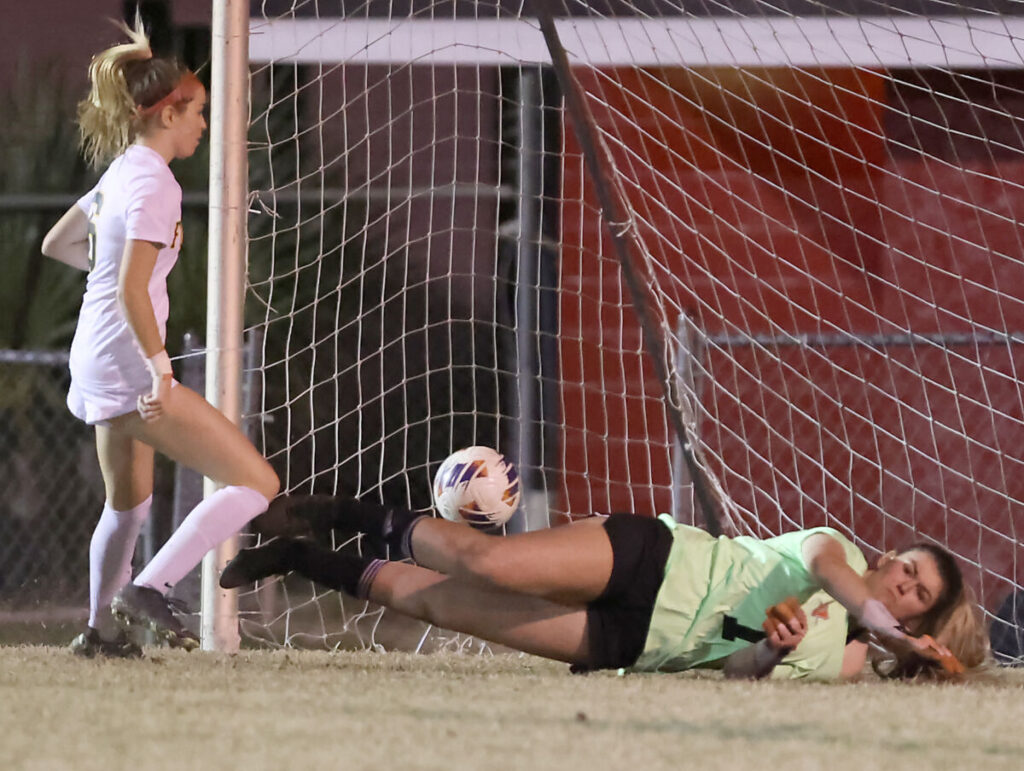 The Forest Wildcats (11-4-2) and Vanguard Knights (14-3-1) girls’ soccer teams locked horns on Thursday night at Booster Stadium in a battle of the team with the two best records in Marion County.

Forest went into attack mode in the opening minutes and had lady luck on their side in the third minute when junior Caroline Cook attacked the goal on a breakaway. Cook’s kick deflected off Vanguard goalie Gianna Meccia and into the net to give Forest an early 1-0 lead.

It was Cook’s seventh goal of the season, which put her into a tie with Jenna Maiorino for the team lead.

Vanguard had an opportunity to tie in the 27th minute on a free kick by Amanda Egan but Forest goalie Summer Smith came up with a fantastic diving save to keep the Knights off the scoreboard.

Janellie Castillo had an open opportunity to give Forest a two-goal lead but her shot on goal missed wide right. Vanguard started to play more aggressive on offense in the second half and had three good opportunities to score but fell short.

Egan had an open look from the right side but her shot missed just wide left of the net. Following a steal on defense, Vanguard’s Ruby Scott had a breakaway run, but her pass went too wide to the left and killed the momentum.

Egan got one more chance on a free kick about 25 yards from the net but missed high by less than a foot.

Sophomore Rylynn Robinson scored her second goal of the season late in the second half. Robinson showed great ball control coming down the right sideline and nailed it in from 35 yards away and just above the fingertips of Meccia to give Forest a 2-0 lead they would not relinquish.

This past week has not been kind to Vanguard as they have suffered back-to-back losses following a 14-1-1 start to the season. Key pieces such as leading goal scorer Marleigh Martinez and fellow starter Jenna Walker were out with injuries.

“It’s been difficult, had to move a lot of pieces around and the last week has been tough. We’ve done a good job overcoming the injuries, just tonight was too much. Forest played well and we didn’t play as well.” Vanguard head coach Jay Fratello said.

The injuries may be a blessing disguise as new players are taking on bigger roles as postseason play starts next week.

“We have three freshman (Addison Fratello, Ashlyn Wan and Ruby Scott) and they’ll have to step up. We’re so deep into the season that they are not really freshman anymore so it’s time step up and show us what you got, I have confidence in them and we will be okay.” Fratello said.

Despite relentless effort from Vanguard’s forwards, Forest’s defense continued its stingy play in the shutout win, their 10th such victory of the season.

Forest head coach Stacie Menadier credited the defensive play of her team as being the key to victory on Thursday night.

“Our backline plays smart, fast and have good technique, so it’s going to take a lot to break them down. They’re fit, strong, physical and they played phenomenal tonight, it was just an all-around team effort.” Menadier said.

With district tournaments starting next week, Menadier hopes to see her team carry over the momentum from this win.

“Tomorrow is senior night against Belleview, so we are hoping to get a win there before we go into districts. We have a tough district, and we are going to have to keep our composure to keep this momentum and pull out some wins.” Menadier said.

Both teams start district tournament play next Tuesday against opponents that have not been decided as of Thursday night.