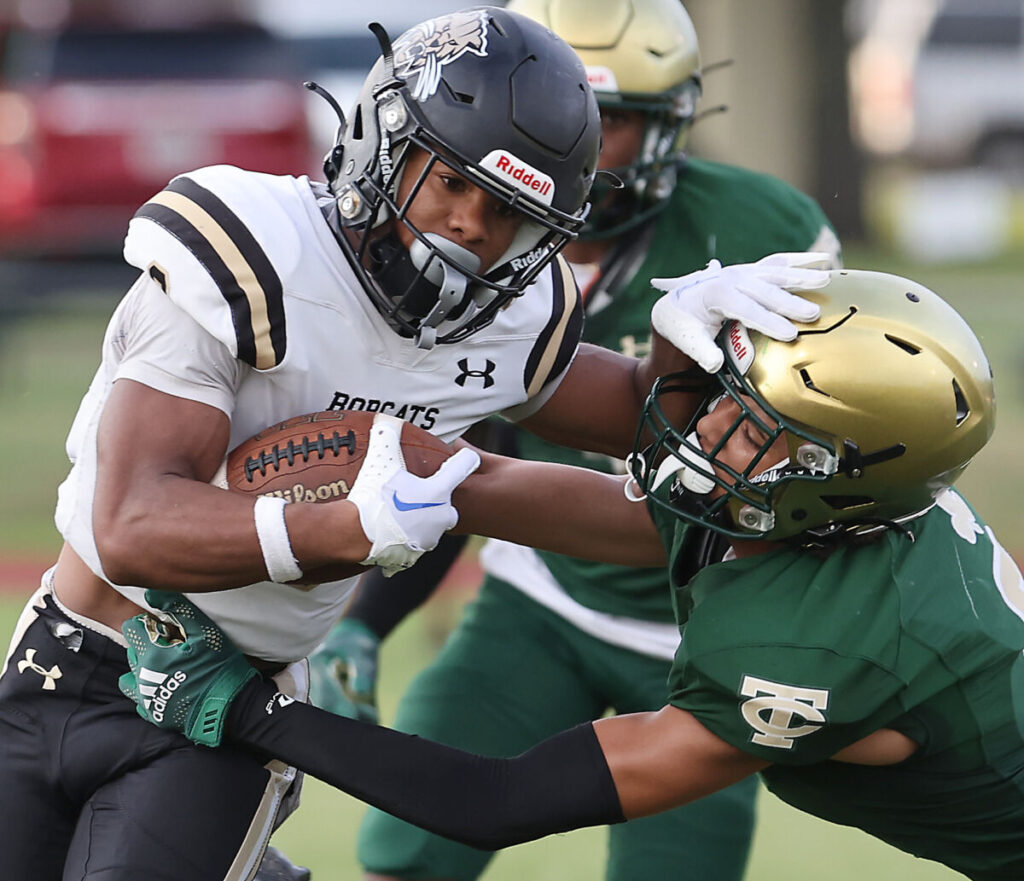 Buchholz’ Jacarree Kelly (9) pushes off on the helmet of Trinity Catholic’s Devontae Grant (8) for a large gain during Buchholz’ win over the Celtics in a preseason game at Trinity Catholic High School in Ocala, Fla. on Friday, August 19, 2022. [Bruce Ackerman/Ocala Gazette] 2022.

Pre-season classic games are known for getting teams prepared for the regular season and exposing what areas that teams can work on before the games start to count.

Friday night was one of those nights for the Trinity Catholic Celtics as they hosted the Buchholz Bobcats at Dunlap Field. The Buchholz defense got to work on the Celtics opening drive with a third-down sack from junior defensive end Kendall Jackson to force a punt.

The Celtics defense responded by forcing a punt that was aided by a personal foul flag on Buchholz. Trouble started brewing on Trinity’s second drive when junior quarterback Alan Means was intercepted by Florida Gators defensive line commit Gavin Hill. The senior tipped the pass to himself and returned it 54 yards for a touchdown.

Trinity Catholic head coach John Brantley III rotated Jake Engelhardt and Means at quarterback the entire game. In Engelhardt’s second series, senior running back Beau Beard gained eight yards on first down but a false start on second down killed the momentum of the drive and the Celtics were forced to punt.

The Bobcats were given good field position and started their second drive on the Celtics 38-yard line. Senior quarterback and Florida Gator commit Creed Whittemore found fellow senior Jacarree Kelly on a 13-yard completion on the first play of the drive and hit him in stride for a 25-yard touchdown pass two plays later.

Means came back out for his second drive and would throw another interception and Kelly would return it 43 yards for the Bobcats second defensive touchdown of the game. The drive was the low point of the night for Brantley’s squad as they committed three penalties and used two timeouts right before the play clock expired. Before Kelly’s touchdown, Means hit a wide-open Jewellius Lluberes for a 45-yard touchdown down the sideline, but a holding penalty negated the score.

With Buchholz leading 21-0, the Celtics needed a spark and received one from Beard as he would slash the Bobcats by running right up the middle of the field for a 43-yard touchdown.

Running back Beau Beard with a 43-yard scamper to the end zone and the Celtics are on the board with 7:48 left in the 2nd quarter. pic.twitter.com/Wmb6ywUvO7

“I saw daylight and I knew I was gone. You got to be determined when running the ball and I just have to keep that going and get the defense to feed off me.,” Beard said.

It was the best drive of the night for the Trinity offense as they had four first downs on the drive. Buchholz would answer back at a lightning-quick pace by going 80 yards on two plays. Whittemore dropped a perfect over the shoulder pass to senior Jaren Hamilton as he was in stride to connect for a 75-yard touchdown.

“Offensively, we have fast guys all around me and it’s easy to score quick. I think we can get better at extending our drives and having a more balanced drive, but you can never complain about a touchdown.,” Whittemore said.

Means would come back out for a third drive and threw his third interception of the night to senior Colin Nechodom after converting a couple of first downs. The Celtics defense continued to compete and force another punt to give their offense one more drive to gain some confidence heading into the season opener next Friday.

Engelhardt completed passes to Mekai Griffin and Lluberes to get a first down, but the night would end on a sack by Thomas Weinhardt. The Bobcat’s defense was the difference as they had three interceptions and two sacks in the 28-7 win. The varsity squads for the two schools only played one half to allow the junior varsity teams a chance to play a half.

Buchholz head coach Mark Whittemore was pleased with the intensity and effort of his team in the pre-season classic. “We were crisp, and we were playing fast. I wanted us to show up and play fast, we were ready to play, and the juices were flowing with all that intensity.,” he said.
There was good and bad from the Celtics on the night. The bad was nine penalties and three turnovers but the potential flashed at times as the offense had 12 first downs and forced two punts on defense. They were without two of their starting offensive lineman, Miami Hurricanes commit Tommy Kinsler and Dominic Johnson. Despite the missing pieces, Brantley was not going to use excuses to explain the result.

“You have to look at the positives. We got some work to do but you have to give Buchholz credit, there a good football team.,” Brantley said.
Brantley was optimistic about his team and is looking forward to the season opener and continuing to improve. “Both teams, a lot of it was just being a little lazy combined with the heat, but those (mistakes) can be corrected. That’s the good thing, I saw some good things and I saw some things that we definitely need to touch on.