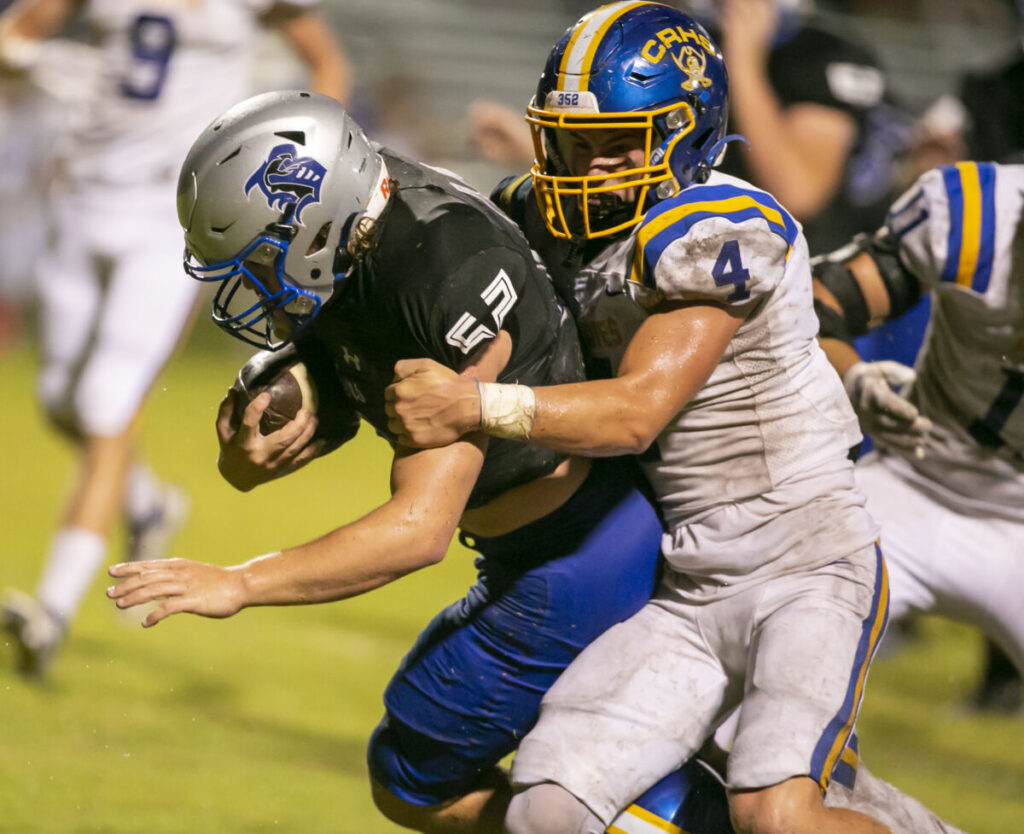 The Rattlers were back at home for the second week in a row, this time hosting the Crystal River Pirates at The Strike Zone at Brent Hall Field on Friday night.

According to Rattlers head coach Brian Lane, his team was out for revenge after losing this matchup last season and the team was conscious of that heading into game.

“Crystal River was one of the three teams that beat us last year and some of the guys were offended by the outcome,” he said.

The rain came early and often throughout the day as nearly four inches of rain came down but that played right into a strength for Lane’s team. The offensive line received a big boost by having junior center Hunter Root back in the starting lineup.

Junior running back Eric McLaughlin took advantage of the muddy, wet conditions and his strong offensive line and ran for more than 150 yards and two touchdowns. His first touchdown came halfway through the first quarter and after the Pirates answered with a score of their own, McLaughlin put the Rattlers ahead for good with just over a minute left in the first half.

“Going into the game tonight, we wanted to establish the run. Our backs were a little bit upset about their performance from last week,” Lane said.

He added, “They took it upon themselves to put us on their back and go to work.”

Junior kicker Aiden Kaczmarski would put the game out of reach with a 20-yard field goal with about four minutes left to go to give the Rattlers a 16-6 win. Kaczmarski also had four touchbacks on kickoffs and an extra point to go with his field goal.

The defense did their part to shut down the Pirates offense and the group’s effort gained the praise of their head coach.

“It’s been awesome for us to be able to kind of rely on them and know that they’re going to get the job done. They’re very resilient and we have put them in bad situations where the offense hasn’t been able to push it in or we get behind the chains. They bow their back and hold tough, very proud of our defense right now,” Lane said.

The Rattlers are off to a 2-0 start for the second year in a row but a tough string of games against county rivals (North Marion, Forest, Vanguard and Dunnellon) come over the next five weeks and Lane is aware that his team has to stay focused and continue to improve.

“These are very formidable opponents coming up. Monday is Labor Day, but I talked to some of my seniors this week and several of them said they remember when North Marion beat us 84-0 a couple years ago. They have a chip on their shoulders for that and they told me we better be practicing on Monday,” he said.

He added, “They know that we got to put work in, and they know that as a program, that if we want to get back to where we were in the past, the road goes through them (North Marion).”

Belleview visits the Colts next Friday at 7 p.m.