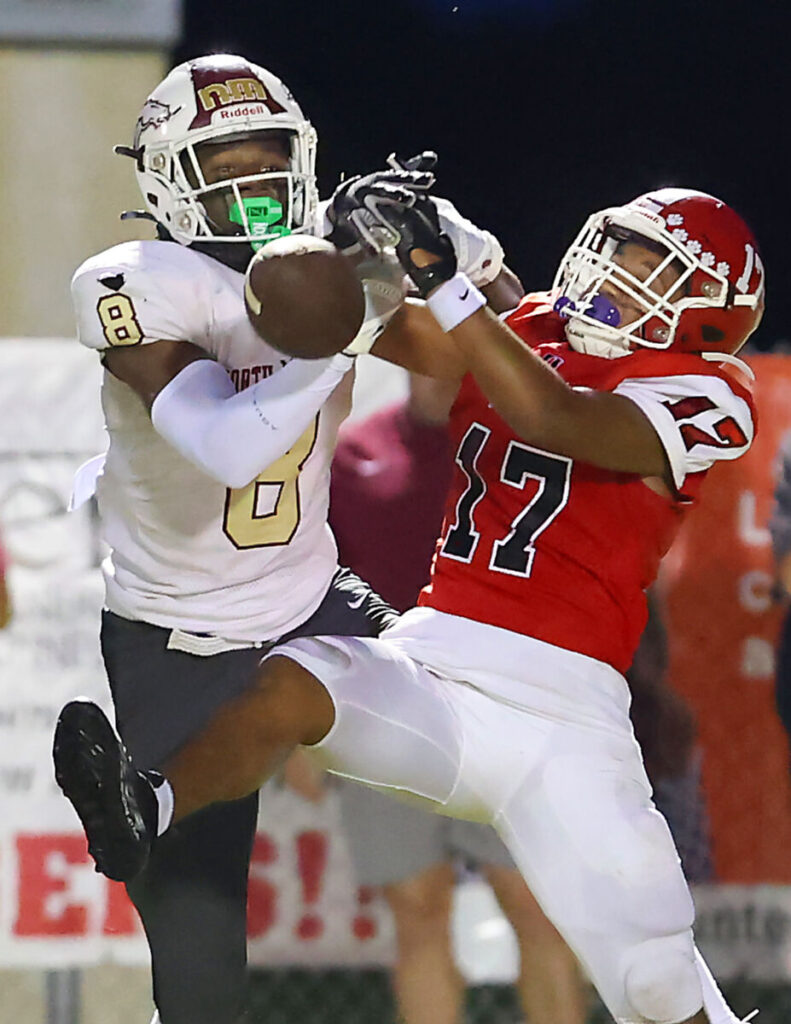 North Marion’s Caleb Rollerson (8) has a pass intended for him broken up by Dunnellon’s Sean Martin (17) during a football game at Dunnellon High School in Dunnellon, Fla. on Friday, Sept. 2, 2022. [Bruce Ackerman/Ocala Gazette] 2022.

It was an early-season matchup between two Marion County football powerhouses on Friday night at Ned Love Field in Dunnellon as the Tigers hosted the North Marion Colts.

In front of a packed stadium, both teams were looking to move to 2-0 on the young season. The game got off to a sluggish start as both teams traded punts for each of their first two drives on offense.

With just under a minute left to play in the first quarter, Dunnellon running back Amari Francois lost a fumble and Junior defensive end Kameron Swinton scooped it up and returned it 30 yards for a touchdown to give the Colts a 7-0 lead.

Colts head coach Greg Carr was happy to see the defense score for the second week in a row and knows that it will be key to keep that trend going, especially when the offense gets off to a slow start.

“We are focused on creating turnovers and putting points up on the board (on defense). It was one of them nights where the offense got motivated from that first defensive touchdown,” Carr said.

The scoop and score opened the flood gates for the Colts as senior defensive back Jabrel Samuel intercepted Dunnellon quarterback Dylan Curry on the third play of the following drive. On the next play, senior running back R’Jayvious ‘JJ’ Johnson took a carry outside and dashed down the left sideline for a 25-yard touchdown run and extend the Colts lead to 13-0.

Dunnellon gained a little momentum on the ensuing drive with a couple of 7-yard runs from Francois to gain there first first down of the game. The drive would end in a punt and the Colts would drive 65 yards on nine plays and ended with a 5-yard touchdown run for Johnson. A 15-yard penalty for a late hit on quarterback A.J. Cussins and a 24-yard reception by wide receiver Chris Foster were the biggest moments of the drive that led to the touchdown.

Johnson was on a mission after a couple of fumbles against Forest last week. “My line was blocking, I was seeing the holes, pressing it and just doing my assignments. Last week, losing two fumbles, I came in with a chip on my shoulder,” he said.

He added, “Coach Collins mainly focused on me holding on to the ball in practice this week. Things happened and my line gave me great blocks.”

The Tigers got off to a good start on the following drive with Francois running for 20 yards on first down, but the drive would stall after a lateral pass pushed them back six yards and Samuel would nab his second interception of the game.

Cussins and the offense drove 77 yards in four plays, 52 of those yards came on a reception by wide receiver Caleb Rollerson on a jump ball down the left sideline. The Colts quarterback would connect with senior wide receiver Dalton Merritt on an 8-yard touchdown pass to put the Colts ahead 28-0 with a little over a minute left before halftime.

Carr and the team dedicated the win to Merritt and his family after the recent loss of a family member.

The Tigers defense forced a punt to start the second half and the Colts defense would answer with back-to-back sacks from senior defensive lineman Arkese Heath. The Colts blocked the punt attempt, which gave the offense the ball at the Dunnellon 5-yard line. Johnson would punch it in for his third touchdown of the night to make it 35-0 and start the running clock with five minutes left in the third quarter.

The remainder of the game featured a handful of punts and an interception from Tigers freshman cornerback Amari Jones. Overall, it was not the best of nights for Tigers head coach Thomas Sutton and his squad, but he is confident his team will be ready to get back to work on Monday.

“I expect them to respond, we have some leaders that are just kind of dipping their toe in the water to begin stepping up and leading. We’re going to need that to be more consistent,” he said.

Sutton is optimistic that Friday night could be a good learning experience for his young team as they still have eight games left to go on the season. “Our youth and inexperience showed, if they take this and learn from it, grow from it, then it could be a good thing for us in the long run,” he said.

As for Coach Carr, his goal is to keep his team on the right track and not get complacent after a couple wins to start the season.

“Continuing to grow and continue to get better, taking it week by week. We have to continue to improve and not be satisfied, we want to improve from week to week,” he said.