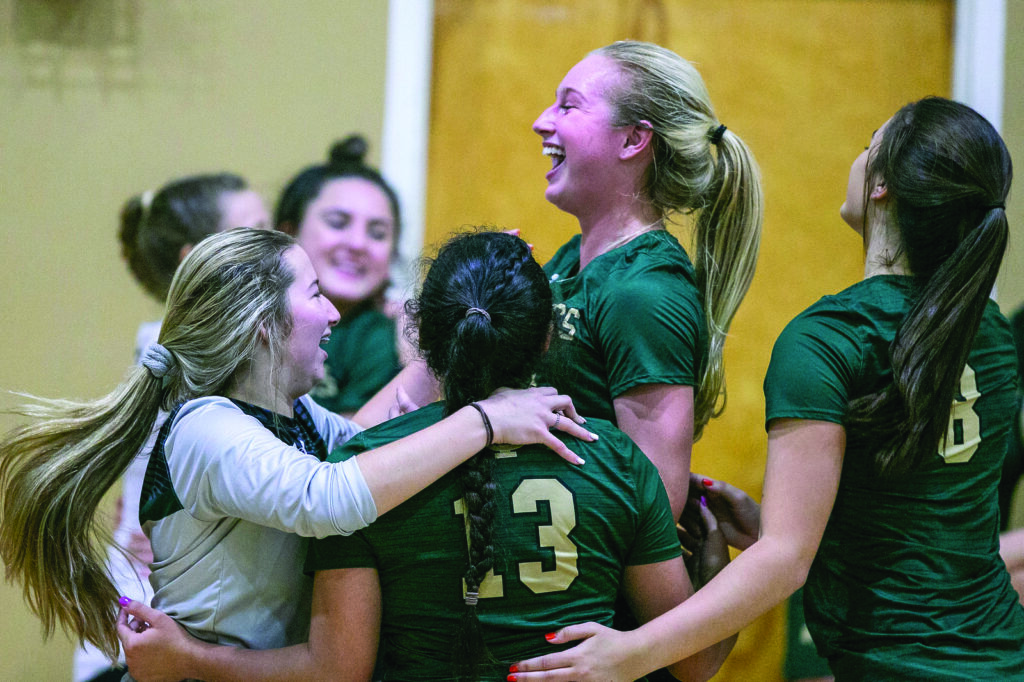 Trinity Catholic Amelia Fitzpatrick (17) and the rest of the team get excited before the game as Trinity Catholic defeats Orangewood Christian in straight sets at Trinity Catholic High School in Ocala, Fl during the 2020 FHSAA Volleyball State Championships – 3A at on Thursday October 22, 2020. [Alan Youngblood/Special to the Ocala Gazette] 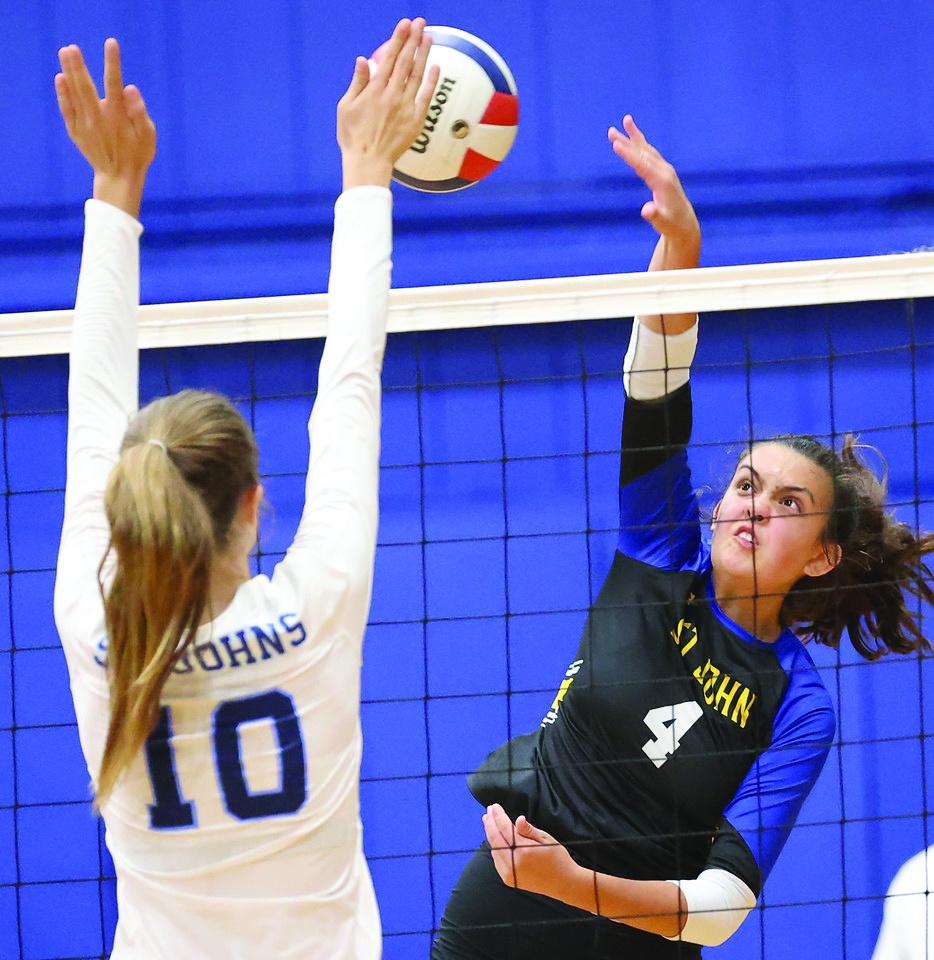 With wins in the regional quarterfinal, Forest, Vanguard and Trinity Catholic move on to the regional semifinal games and continue their trek through the state bracket.

In the first round of the State Tournament (regional quarterfinal), St. John Lutheran met its demise as they faced St. John Country Day. While the Saints fought hard and gave St. John Country Day a run for their money with set scores of 22-25, 22-25, 26-24 and 15-25, in the end the Spartans were too much to handle and won the match 3-1.

Alas Meadowbrook’s 2020 season is over. 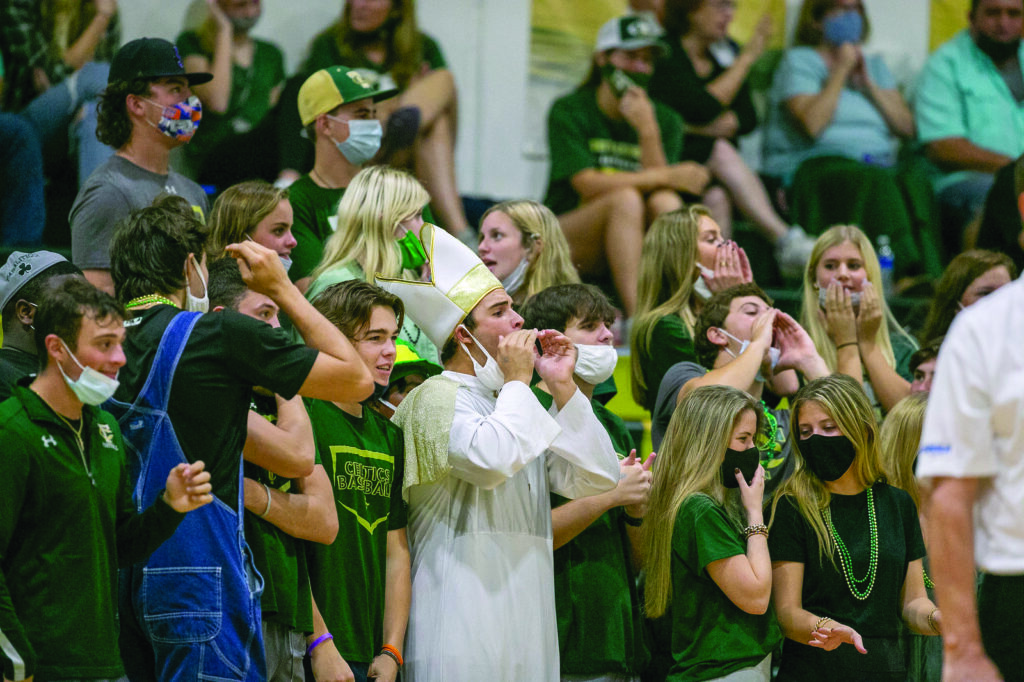 Following their District Championship win over Father Lopez on Oct. 22, the lady Celtics took on Orangewood Christian, whose only loss on the season was to Trinity Prep in the championship game for their respective district.

Leading the offense were Chloe Teter and Kiana Laborde with 10 kills apiece and Amelia Fitzpatrick contributing an additional nine. Izabella Sanchez assisted on 22 points and Fitzpatrick added 18 assists from her backrow transition.

Laborde also led the defensive stance with 12 digs on the night, followed closely by McKenna Yates with another 11.

Following the win, TC traveled to Winter Park to face Trinity Prep for the regional semifinal in round two of the state bracket. The lady Celtics again made their presence known, blanking Trinity Prep with set scores of 25-16, 25-15 and 25-16. 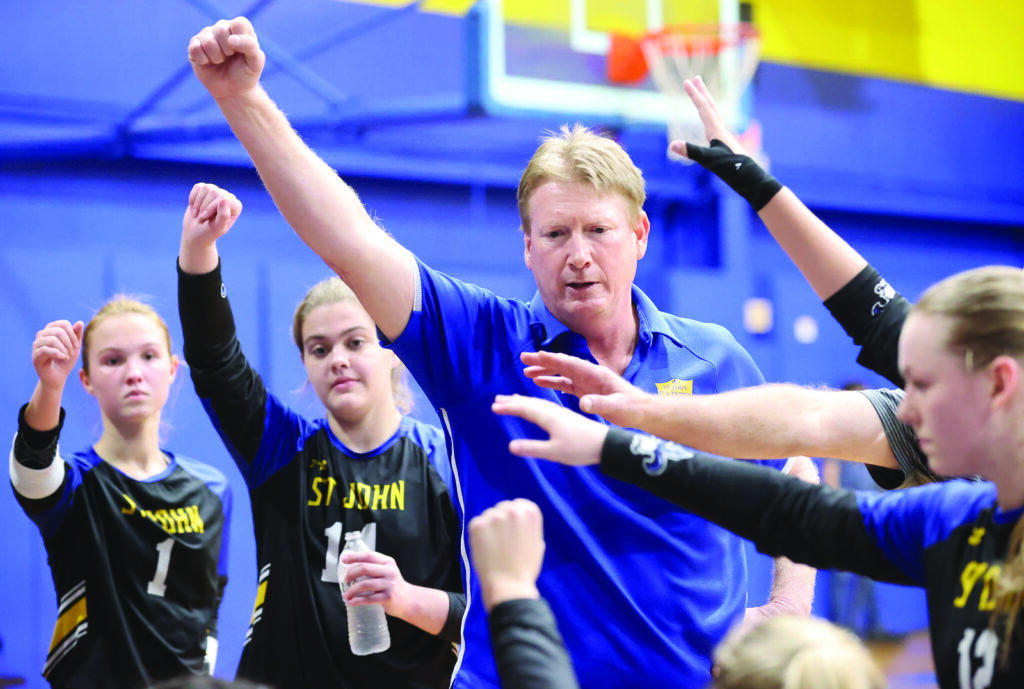 Laborde and Teter stayed consistent in their offensive attack, jointly contributing 28 of the team’s 42 kills. TC’s tough defense added to the onslaught, with a team total of 55 digs (Yate,  15; Laborde, 15; and Crews, 10).

The lady Celtics travel to Pensacola Catholic Saturday to take on the lady Crusaders, who have a current record of 16-2.

Following their loss to Crystal River in the District Championship, the road for North Marion did not get any easier as they confronted the undefeated Hornets of Weeki Wachee.

Entering the first round of the state bracket, in the regional quarterfinal, Vanguard took on Lake Minneola and handled them with ease.   With set scores of 25-11, 25-16 and 25-18, Vanguard moved on to the next round. 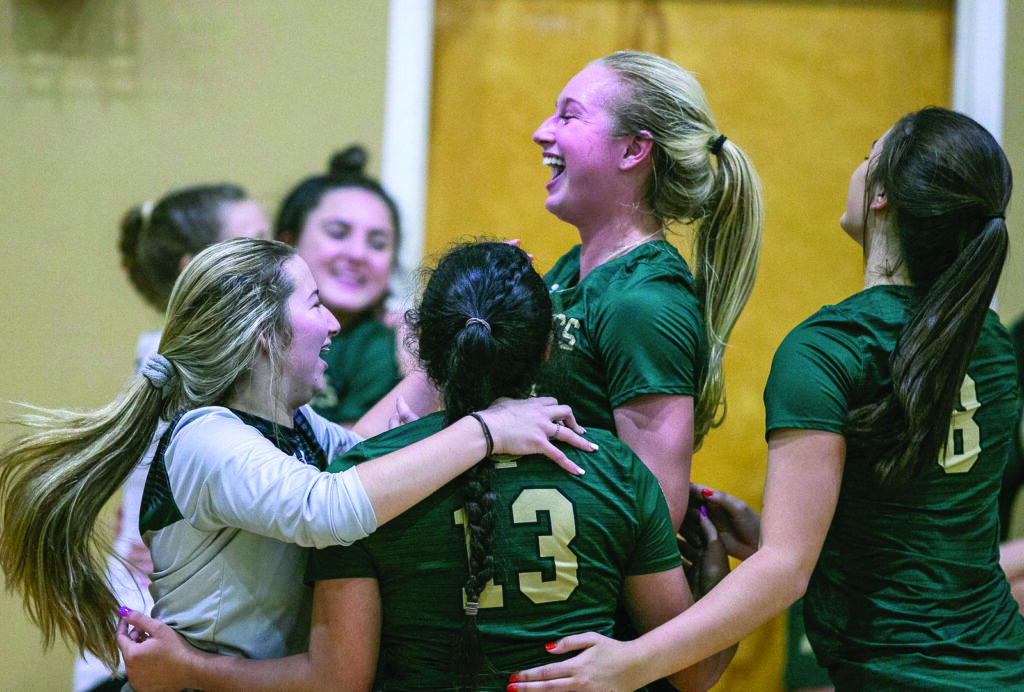 Trinity Catholic Amelia Fitzpatrick (17) and the rest of the team get excited before the game as Trinity Catholic defeats Orangewood Christian in straight sets at Trinity Catholic High School in Ocala, Fl during the 2020 FHSAA Volleyball State Championships – 3A at on Thursday October 22, 2020. [Alan Youngblood/Special to the Ocala Gazette]

Team leaders in the victory were Emma Ehmann who dominated the outside with 21 kills, eight service points including two aces, and 13 digs. Setter Sophie Reed had 35 assists on the night, six kills, 10 service points with two aces and 10 digs.

Also contributing to the offense front were Adyla Kerley (six kills) and Ruby Owen (five kills).  Taryn Reardon added to the essential defensive side of play with 13 digs.

Vanguard will play their next game at home against Fivay out of Hudson at 2 p.m. on Saturday.   Solely comparing records Vanguard should walk away with a victory as Fivay is barely over .500 at 13-12.

Forest matched-up against South Lake for the regional quarterfinal on Oct. 21. Although Forest was tested by South Lake in the first set, 25-22, the Wildcats came out hot in the next two sets, easily winning by scores of 25-18 and 25-15, blanking South Lake 3-0.

Forest was scheduled to take on Gainesville, who they beat for the District Championship> However, due to a recent COVID-19 outbreak on the Gainesville team, they were forced to pull out of the tournament and forfeit to Forest.

With the unconventional win, Forest will travel to St. Petersburg on Saturday to play the lady Green Devils at 2 p.m.  St. Petersburg high school has a current overall record of 14-3. 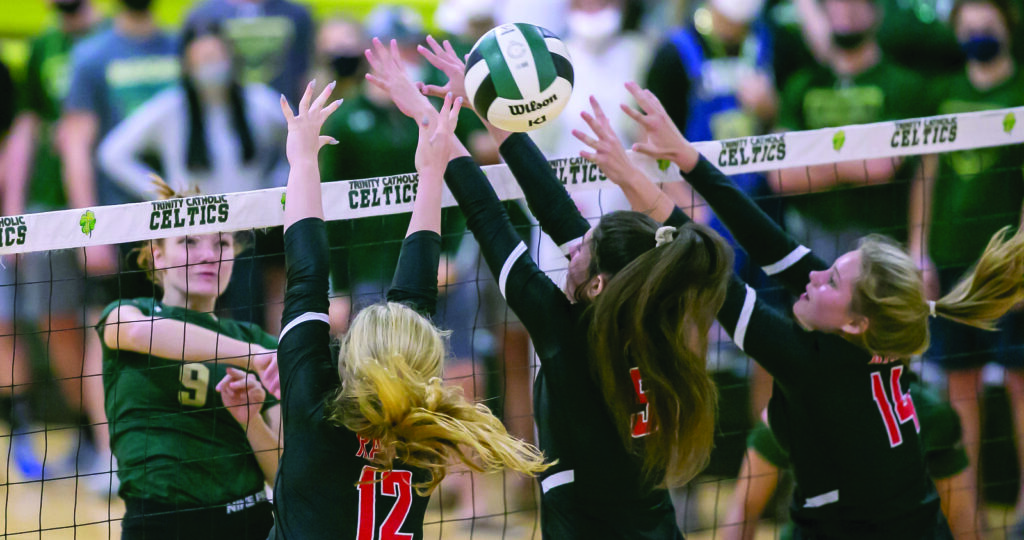 Trinity Catholic middle blocker Emily Hirst (9) spikes the the ball through a host of Orangewood defenders as Trinity Catholic defeats Orangewood Christian in straight sets at Trinity Catholic High School in Ocala, Fl during the 2020 FHSAA Volleyball State Championships – 3A at on Thursday October 22, 2020. [Alan Youngblood/Special to the Ocala Gazette]