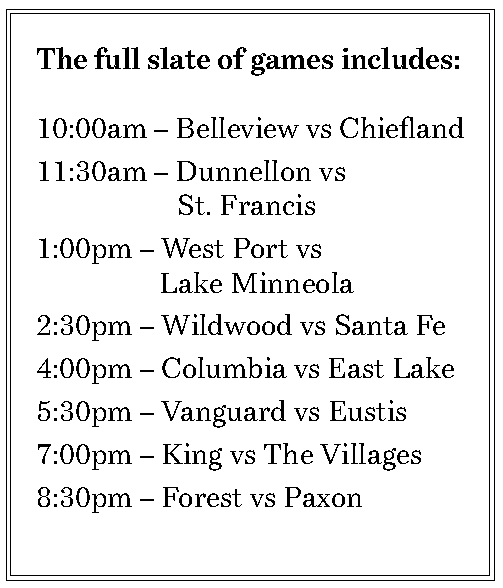 Some of the region’s top high school basketball talent will meet on the same hardwood on Saturday at Forest High School’s gymnasium when the Wildcats host the third annual MLK Classic.

The tournament will feature eight matchups, good for over 11 hours of basketball action.

However, the tournament hasn’t gotten off without a hitch. Despite previously including North Marion and Bishop McLaughlin (Spring Hill), tournament organizers have had to scramble to replace the two teams, which had to bow out due to COVID-19 concerns.

But the show goes on.

The first game of the day will tipoff at 10 a.m. between Belleview and Chiefland.

The Wildcats round out the evening with a much-anticipated matchup against the Paxon Golden Eagles.

Hailing from Jacksonville, the Golden Eagles boast a 10-4 record as of Jan. 14.

Paxon is led by senior Jakobe Williams, who is averaging 14.8 points per game, and is shooting for 46 percent from the field.

The Golden Eagles are also helped by senior Quinnton Jackson, who has tallied 65 rebounds and 41 assists on the year. Jackson is also shooting 51 percent from the field and 30 percent from beyond the arc.

The tournament is open to the public and tickets cost $7. Organizers stress they will enforce Centers for Disease Control and Prevention COVID-19 guidelines. Masks are required for entry.

Ashley said he was super excited to host the tournament.

“This is the best talent we’ve had at the MLK Classic. Six out of the seven local county teams are in it… It should be a good day, a good, good day,” he said.