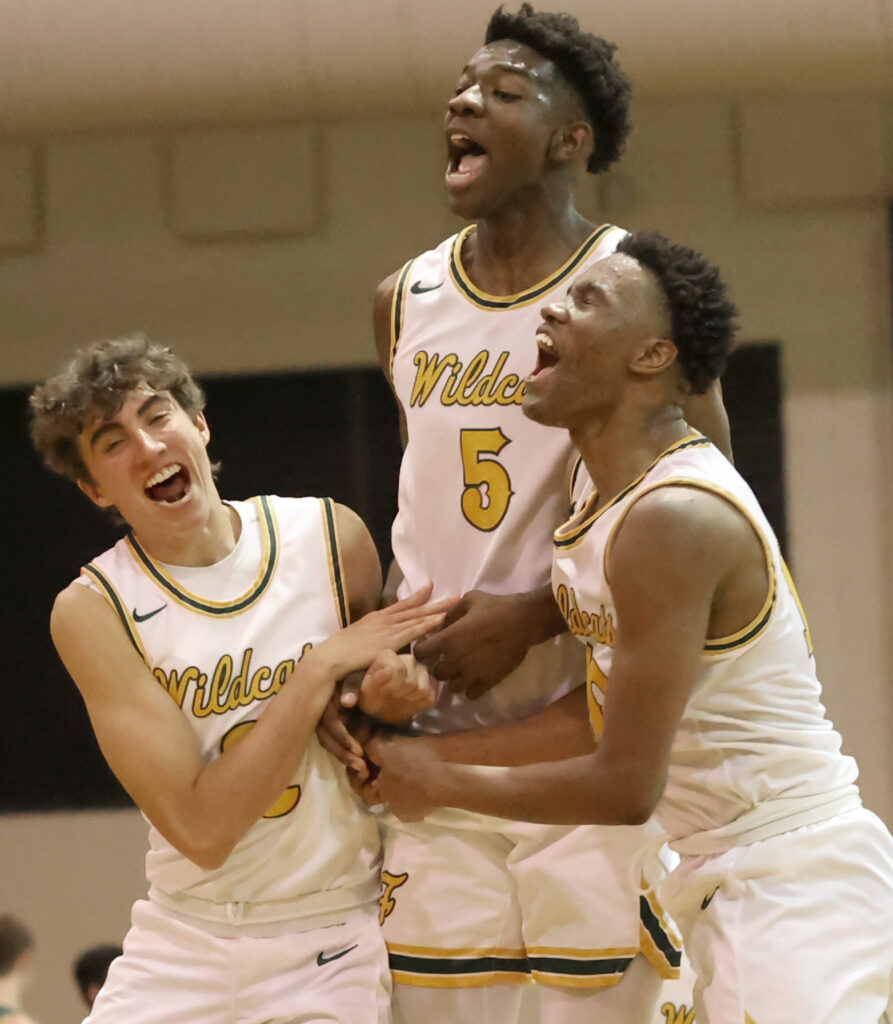 Forest’s Aaron Stelogeanis, Brenen Lorient and Josh Cuspard, left to right, leap in the air as they celebrate their win over Fleming Island in a regional quarterfinal basketball game at Forest High School in Ocala, Fla. on Thursday, Feb. 18, 2021. The Forest Wildcats won the game 48-43. [Bruce Ackerman/Ocala Gazette] 2021.

Forest’s Aaron Stelogeanis, Brenen Lorient and Josh Cuspard, left to right, leap in the air as they celebrate their win over Fleming Island in a regional quarterfinal basketball game at Forest High School in Ocala on Thursday. [Bruce Ackerman/Ocala Gazette]

Elijah Russell was leading the Wildcats’ scoring efforts when he left the game with an apparent leg injury early in the fourth quarter.

The 6-foot-8 junior was making great use of his size against the Fleming Island Golden Eagles during Thursday night’s back-and-forth playoff battle at Forest High School.

And though Forest fared well in Russell’s absence, the Wildcats missed their big man as the game started to come down to the wire.

“I trust Elijah with my life, with my wife’s life… with my daughter’s life,” Forest head coach Spencer Ashley said. “He was begging me to go back in… We made sure he was good.”

With 1:19 left to play in the game and the Wildcats’ white-knuckling a slim lead, Russell finally got the nod and checked back into the game.

On his very first play back in action, Russell would pickpocket a Fleming Island pass and take it to the other end of the floor where he jammed it through the rim, sealing the Wildcats’ 48-43 win.

Following the roof-raising slam, Russell wasn’t thinking about his cramping calf or the struggles that Forest faced early in the game.

Fleming Island outmuscled Forest in the first half.

The Eagles’ rebounding, paired with two double-digit scoring quarters, helped them take an eight-point lead into the locker room.

It also sparked a halftime challenge for the Wildcats.

And in the world of basketball, defense almost always converts into offense on the opposite end of the floor.

Davison dropped two three balls late in the game that proved to be massive momentum shifts for the Wildcats and paved the way for Russell and Lorient to dunk daggers in the fourth quarter.

“I think they all did a great job of making that adjustment of ‘If we don’t do this right now, our season is over,'” Ashley said. “And they just weren’t ready for that. They’re ready to keep going.”

Forest (16-6) will look to stay alive and advance through the region semi-finals on Tuesday when they host Fletcher (Neptune Beach) at 7 p.m.