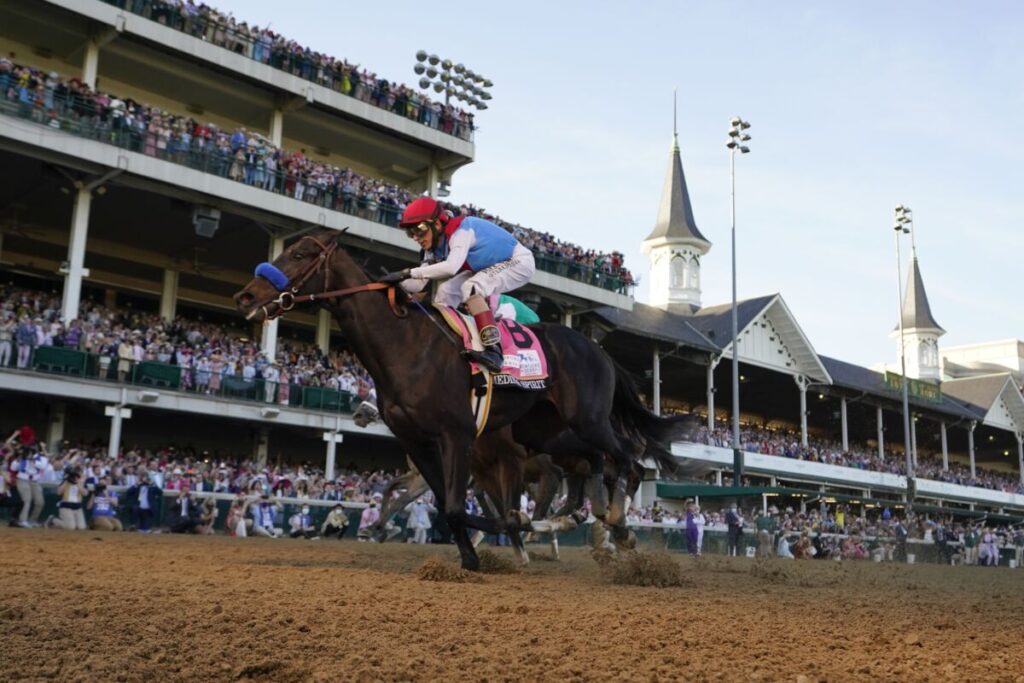 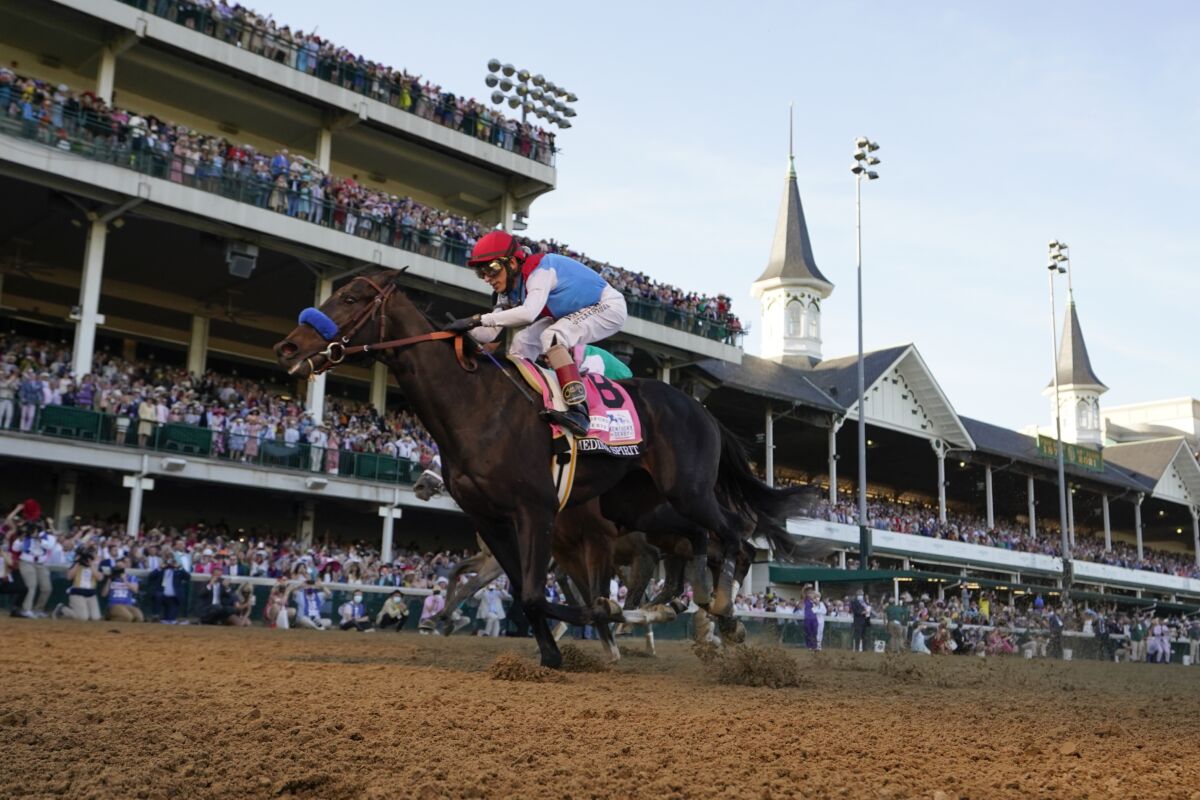 John Velazquez riding Medina Spirit crosses the finish line to win the 147th running of the Kentucky Derby at Churchill Downs on May 1 in Louisville, Ky. (AP Photo/Jeff Roberson)

The top racehorses from around the globe will assemble at Del Mar Thoroughbred Club in Del Mar, Calif. on Nov. 5-6 for the 38th Breeders’ Cup World Championships. Six Florida-bred runners, led by Kentucky Derby (G1) winner Medina Spirit in the $6 million Breeders’ Cup Classic (G1) on Saturday, will carry the state’s banner into competition over the highly anticipated two days of racing that features 14 races and purse money of more than $31 million.

In the event’s 37 prior runnings, there have been 29 Florida-bred winners of races, topping all states other than Kentucky (228 winners). In addition to Medina Spirit, who will attempt to join fellow Sunshine State products Unbridled, Skip Away and Mucho Macho Man as winners of the Breeders’ Cup Classic, Florida-bred competitors poised to add to the state’s Breeders’ Cup win tally include Pappacap in the $2 million Juvenile (G1) today, Golden Pal and Extravagant Kid in the $1 million Turf Sprint (G1) on Saturday and C Z Rocket and Firenze Fire in the $2 million Sprint (G1) also on Saturday.

Medina Spirit will take center stage in the marquee race of the weekend when he faces an accomplished group of runners in the Classic that includes division leader Knicks Go, Essential Quality and Hot Rod Charlie. A two-time graduate of the Ocala Breeders’ Sales Company (OBS), Medina Spirit sold for the bargain price of $1,000 in 2019 and then went through the auction ring a second time the following year as a 2-year-old, when he was purchased by bloodstock agent Gary Young on behalf of Amr Zedan’s Zedan Racing Stables for $35,000.

Bred by Gail Rice, Medina Spirt, a dark bay son of Protionico out of the Brilliant Speed mare Mongolian Changa, is trained by Bob Baffert. A winner in five of his nine starts, Medina Spirit has rewarded his connections with earnings of $2,525,200. Medina Spirit turned in a maintenance gallop at Del Mar Wednesday morning with his trainer overseeing the final conditioning at the seaside oval.

“He likes this track and is training really well coming up to the race,” said Baffert, who is a four-time Classic winner and saddled last year’s Classic winner Authentic. “I really can’t do anything about the draw (post position No. 8). The break is always important, so that might help determine how the race shapes up.”

In addition to his Kentucky Derby triumph in May, Medina Spirit most recently annexed the Awesome Again Stakes (G1) at Santa Anita in his final prep race for Saturday’s Classic. With Horse of the Year implications on the line in the Classic, Medina Spirit will be ridden by his regular jockey John Velazquez.

“There’s speed in the race, but I don’t know if there’s Knicks Go-type speed,” said Young. “Obviously, Medina Spirit’s a fast horse and Hot Rod Charlie’s not a slow horse, but Knicks Go is a very fast horse. You couldn’t ask for Medina Spirit to be in better hands than Johnny V’s. I don’t think he needs the lead to run well. I find it hard to believe a horse with his desire to win has to have the lead to do it. Usually, he’s fast enough to be in front. If he wins the race, I don’t know how you cannot vote him Horse of the Year, I really don’t.”

Florida-breds appear to hold a strong hand in the $1 million Turf Sprint, with the formidable duo of Golden Pal, the 7-2 morning-line favorite, and Extravagant Kid headlining the five-furlong sprint on the grass.

Three-year-old colt Golden Pal will be seeking his second consecutive Breeders’ Cup victory after winning last year’s Juvenile Turf Sprint (G2) at Keeneland. Owned by Mrs. John Magnier, Michael Tabor and Derrick Smith, Golden Pal began his 2021 campaign with a three-length victory in the Quick Call Stakes (G3) at Saratoga in July. Following an uncharacteristic seventh-place finish in a Grade 1 stakes in England in August, he returned to the U.S. and captured the Woodford Stakes (G2) at Keeneland on Oct. 9, defeating Extravagant Kid by 2 ¼ lengths.

Bred in Florida by Randall Lowe, Golden Pal is by perennial leading sire Uncle Mo out of the multiple stakes-winning dam Lady Shipman, by Midshipman, an earner of $902,387 in a spectacular racing career for Lowe’s Ranlo Investments. Golden Pal comes by his affinity for the turf naturally, as his dam was an 11-time stakes-winning turf sprinter.

Extravagant Kid, the veteran of the group at age 8, finished fourth in the Turf Sprint a year ago. The world traveler won the $1 million Al Quoz Sprint (G1) at Meydan in the United Arab Emirates in March and followed that outing with a third-place finish in the King’s Stand Stakes (G1) at Ascot in England. He most recently finished second behind Golden Pal in Keeneland’s Woodford Stakes in his tune-up for Saturday’s race.

All told, Extravagant Kid, who was bred by Vicino Racing Stable and is owned by DARRS Inc., has won 15 races from 53 starts and has bankrolled $1,674,733 for his connections. He is by Kiss the Kid out of the With Distinction mare Pretty Extravagant.

Leading sprinters Firenze Fire and C Z Rocket will contest the $2 million Sprint. Firenze Fire, owned and bred by Mr. Amore Stable, is a son of Poseidon’s Warrior. Now a 6-year-old, Firenze Fire has been a leading sprinter in the division throughout his lucrative career. The hard-knocking Florida-bred is a winner in 14 of 37 career starts and he totes a bankroll of $2,710,350 into Saturday’s Sprint for trainer Kelly Breen.

Firenze Fire’s pair of stakes wins in 2021 came in the Runhappy Stakes (G3) and the True North Stakes (G2) at Belmont Park over the summer in New York, although he hasn’t found the winner’s circle since then. He finished third in the Sprint last year behind Whitmore and C Z Rocket.

C Z Rocket, an $800,000 OBS graduate in 2016, won back-to-back stakes earlier this year and finished second in the Sprint last year at Keeneland, beaten just 3 ¼ lengths by Whitmore. Owned by Tom Kagele, Gary Barber, Madaket Stables and Altamira Racing, C Z Rocket, a durable 7-year-old gelding by City Zip out of the Successful Appeal Successful Sarah, has won 11 of 29 career starts and has amassed $1,491,641 in earnings. He is trained by Peter Miller and was bred by Farm III Enterprises LLC.

“He likes this racetrack,” Peter Miller said of C Z Rocket. “He’s doing well and deserves a chance in here.”

Kicking off festivities on the first day of the Breeders’ Cup, known as Future Stars Friday, is Florida-bred Pappacap. The 2-year-old colt is from the initial crop of Breeders’ Cup Classic (G1) winner Gun Runner and is trained by Ocala’s Mark Casse.

Owned and bred by George and Karen Russell’s Rustlewood Farm, Pappacap won the first two starts of his young career by open lengths, including a sharp 4 ¾-length score in the Best Pal Stakes (G2) at Del Mar. He most recently finished a game second to Corniche—expected to be one of the favorites in the Juvenile—in the American Pharoah Stakes (G1) at Santa Anita.

In addition to the Florida-breds participating in racing’s championship event, OBS will be represented in the Breeders’ Cup by 21 sale graduates, highlighted by Medina Spirit in the Classic and the highly regarded Corniche in the Juvenile (G1). Corniche was purchased for a sale-topping $1,500,000 out of this year’s Spring Sale, where he was consigned by de Meric Sales.

The Breeders’ Cup will be televised on NBC Sports beginning at 5 p.m. E.T. on Friday. The first portion of Saturday’s program will air on NBC Sports starting at 2:30 p.m. E.T. before switching over to NBC at 8 p.m. E.T.