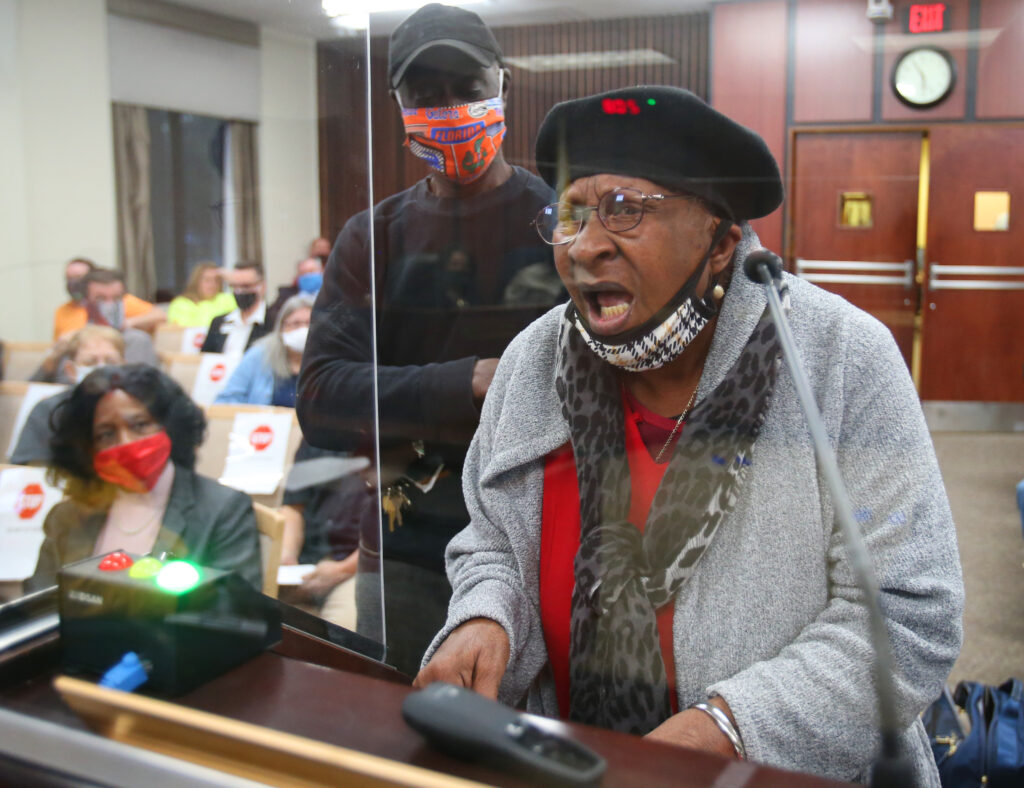 Susie Debose voices her disagreement with the fire assessment tax as her husband, Ozell, looks on during the Ocala City Council meeting at Ocala City Hall in Ocala on Jan. 19. The Ocala City council voted 5-0 to approve the tax which will help pay for city fire services. [Bruce Ackerman/Ocala Gazette]

Susie Debose voices her disagreement with the fire assessment tax as her husband, Ozell, looks on during the Ocala City Council meeting at Ocala City Hall in Ocala on Jan. 19. The Ocala City council voted 5-0 to approve the tax which will help pay for city fire services. [Bruce Ackerman/Ocala Gazette]

Frustrated, masked faces filled every other chair in the Ocala City Council chambers Tuesday night. In the lobby, others stood.

After months of discussion and years of court fights, the Ocala City Council unanimously voted 5-0 to implement a new tax to pay for fire services.

For nearly two hours on Tuesday, residents spoke against the measure, which levies a new tax on residential and commercial property owners in the city.

Councilmembers bemoaned they had no choice but to find a new method to pay for fire services.

“I see a lot of frustration out there,” councilman Jay Musleh said. “I sense the frustration, and I appreciate it. I’m frustrated too. We had a very good mechanism… for collecting the fee.”

In 2006, the city added a monthly fee to every city resident’s Ocala Electric Utility bill. Every city resident who had electric service paid approximately $15 per month to help pay for fire service.

The challenge against the fee started in 2014 and grew into a class-action lawsuit with as many as 76,000 people in the class.

In June, the Florida 5th District Court of Appeal deemed the fee unconstitutional and ordered the city to pay back the money collected. The Florida Supreme Court’s declined to hear the city’s appeal and left the city on the hook to repay upwards of $81 million collected.

Musleh argued that many of the 76,000 people who stand to get a refund are essentially paying twice. The fees they paid were used for fire service. Any refunds will likely be paid for through higher taxes, which many of the same residents will have to pay.

A hearing on the refunds is scheduled for Friday before Circuit Judge Robert Hodges.

The tax approved on Tuesday covers February through September. The yearly tax bill could be about $286, according to a study by Tindale-Oliver.

But the different methods for charging residential and commercial property owners wound up being the whipping post for criticism from the public.

“At the residential calculation, $286 per unit for the entire year, their apportionment would be $246,000,” Roberts said. “However, if you take some of our larger square footage facilities around the city that are commercial… the cap would be $47,000.

“So we’ve got a very significant apportionment where the cost of service is not commensurate with the type of use.”

Roberts also pointed out that owners of vacant land around the city pay none of the tax.

“Even though the service is available to vacant land, vacant land is not assessed under this scenario,” Roberts added. “While I think it would be a pretty easy argument to make that vacant land does not call upon fire services as frequently as a single-family residence, it’s still available. If a fire occurs, there is still going to be a cost to the other taxpayers.”

Echoing some of Roberts’ comments was Jon Kurtz, who owns Oak Tree Village, a small apartment complex and RV campground.

And like Carlton Arms, Oak Tree Village will be on the hook for $43,000 once the initial bill rolls in.

“We cater to moderate and blue-collar people and keep the rents relatively low,” Kurtz told the Council on Tuesday. “Yet the assessments are the same for us as any luxury apartment we have in town.

But Kurtz’s spent much of his time challenging the timing of the assessment.

“Nobody said, ‘What about the people in our community suffering from COVID in a very weak market right now,’” Kurtz said. “Obviously, the fire department is important, and it’s got to be paid for. But I question whether the methodology… is correct.

The first bills will go out in February and require property owners to pay directly to the city. Next year, the tax will be part of the assessment sent out by the Marion County Tax Collector’s Office.