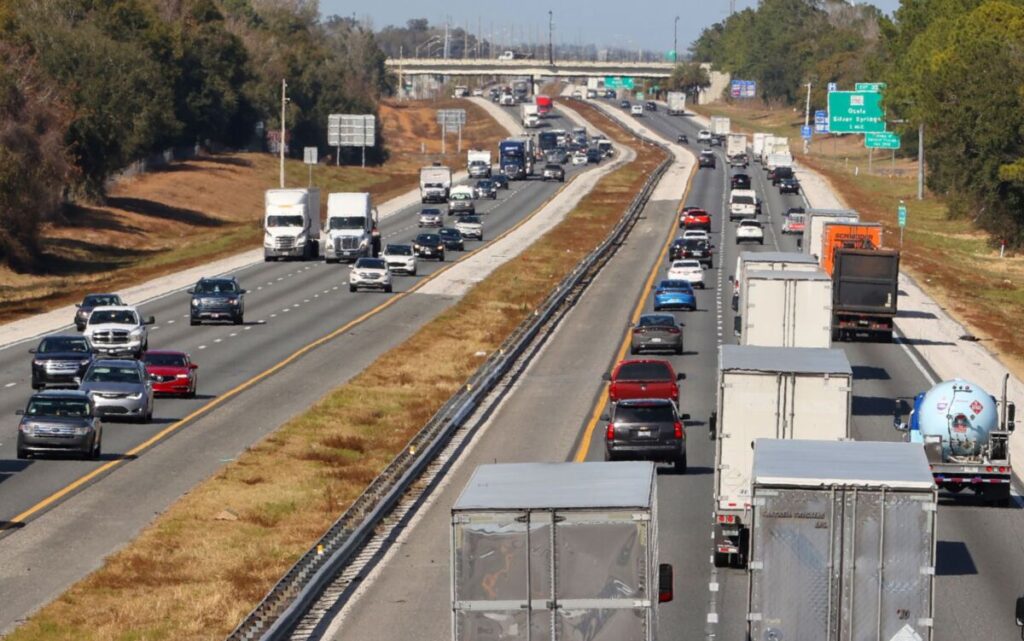 Motorists drive on I-75 as shown from the Southwest 66th Street bridge south of Ocala, Fla. on Tuesday, February 1, 2022. [Bruce Ackerman/Ocala Gazette] 2022.

In an unexpected move, the Florida Department of Transportation (FDOT) has “paused”  plans for its four proposed toll road routes for extending the Florida Turnpike north from Wildwood and ending at US 19 in Levy County. The state will, instead, focus on improvements to I-75.

The proposed toll road project has been completed, according to an FDOT press release, “without recommending a specific corridor and [the FDOT] will not pursue the project any further until options can be reassessed to address concerns of the Department and the community.”

Mayor Bill White of the Dunnellon City Council said he was happy to hear of the decision.

“Dunnellon was the little city that roared,” White stated. “We were one of the first governmental entities to push back on the project. Dunnellon’s environmental concerns were paramount and the proximity to the Rainbow River, Rainbow Springs and the Withlacoochee River” had officials and the public deeply concerned.

Dunnellon was also opposed to the “pass-through traffic” that proposed roads would have had on their community, with routes possibly affecting US 41, State Roads 40 and 200, and County Road 484.

“This is a win for the opposition,” White said.

Opposition forces, including the Sierra Club, 1000 Friends and the No Roads to Ruin coalitions made their own announcements about the news.

The Sierra Club expressed some pleasure, but still questioned the FDOT announcement, asking how the pause would affect statutory requirements, whether the department will complete a Project Development and Environment study and how long the threat of the project will last for voters in Citrus, Levy, Marion and Sumter counties.

“Credit rests with the many local residents and elected officials who clearly understand the many negative impacts of the proposed Turnpike Extension—and associated sprawling development—on their rural economies, water quality, environment and quality of life,” said 1000 Friends of Florida Communications Director Vivian Young, in a press release.

The extension was proposed by the FDOT with four routes, all running through the rural areas of Sumter, Citrus, Marion and Levy counties. In addition to grassroots and environmental groups, multiple city and county boards and councils had voiced their opposition to the state, including the Dunnellon City Council, the Inglis Town Commission, Inverness City Council, the Yankeetown Council, and Sumter, Levy and Citrus county boards.

The Marion County Commission had voted 3-2 to request a seat at the table as the state reviewed options. On Friday, the county issued a statement that said, “We agree that the routes proposed are not viable and look forward to working with our FDOT partners on solutions for Interstate 75 (I-75) in the future.”