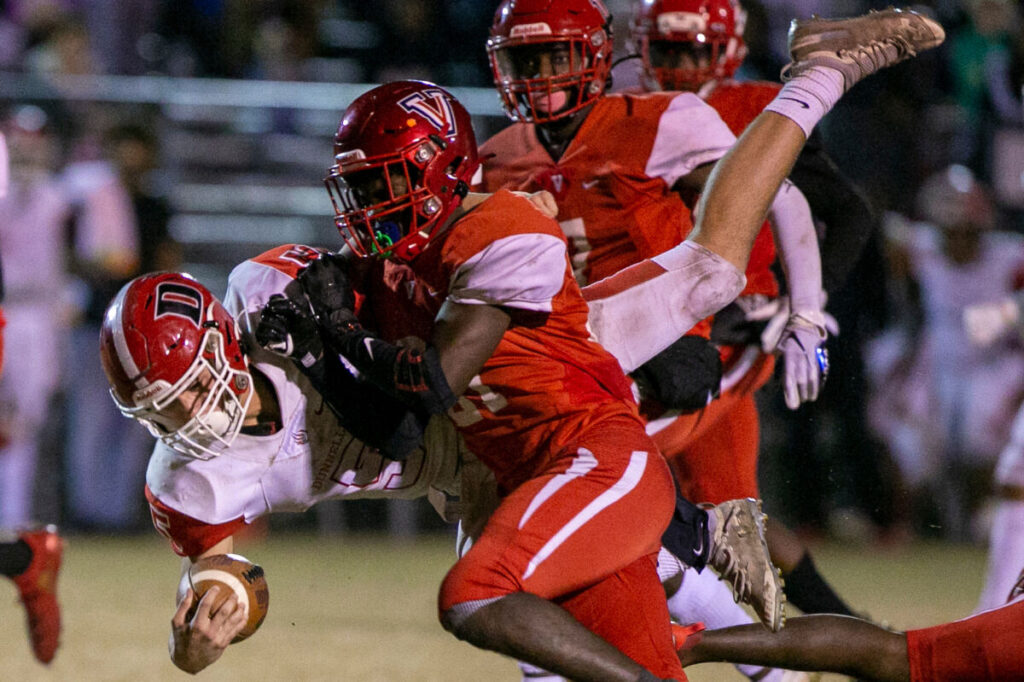 While the rest of the Tigers’ gathered in the south end zone of Booster Stadium to discuss halftime adjustments, Townsend, who was helped off of the field in the final minute of the second quarter after sustaining an injury to his left knee, was kept concealed behind the school busses just outside the stadium.

“We just had to evaluate and see if he could play on it and thankfully he could,” Dunnellon head coach Price Harris said of Townsend. “It’s gonna be sore tomorrow. We have one of the best trainers in the state… and she won’t let anybody play that can’t play.”

“You weren’t getting that boy out of the game, I’m telling you,” Harris finished with a laugh. 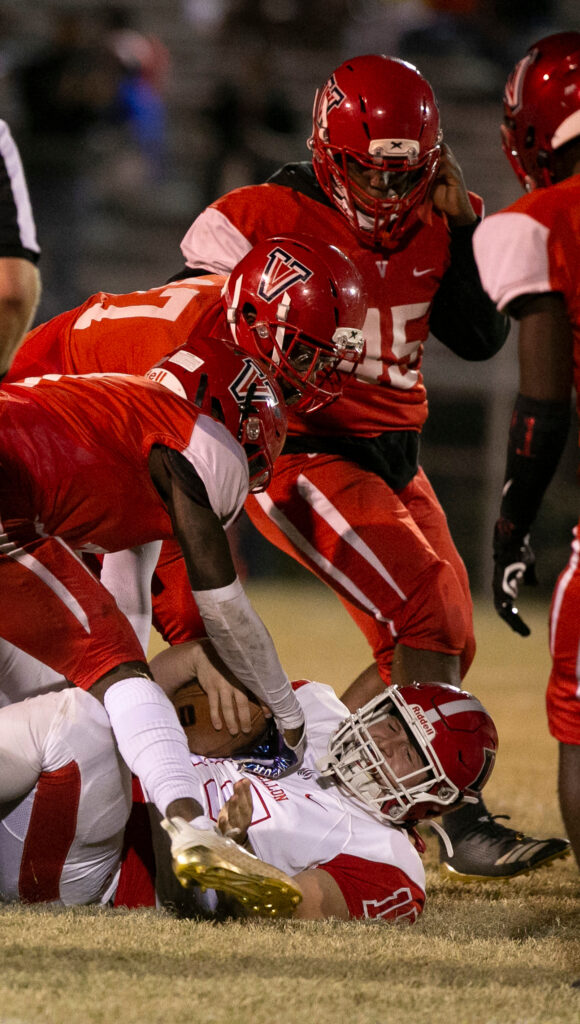 As the final minutes of halftime whittled away, Townsend emerged from the darkness like the hero of a movie, which was fitting considering the Dunnellon quarterback would be the hero of the game as the Tigers came from behind to beat the Knights 13-10 in the 5A region 2 championship.

It didn’t always appear that the Tigers would need a hero.

To set the tone early, Dunnellon junior Le’Var Fitzpatrick took the opening kickoff, which was hauled in inches from the Dunnellon goal line, 75 yards to the Vanguard 25-yard line.

Fitzpatrick’s return set up a short drive for Townsend and the Tigers, who found the scoreboard with the help of a 3-yard rushing touchdown from senior running back Demetrius McCants. The Tigers tried for a two-point conversion, but came up just shy.

Answering with a big play of their own, Vanguard senior Tony Johnson took a handoff around the edge for a 52-yard gain, helping the Knights to the Dunnellon 25.

After Vanguard junior Dewhitt Betterson Jr. carried the Knights into a first and goal situation at the DHS 6-yard line, the Tigers’ defense started kicking into gear.

Dunnellon seniors Colby Smith and  Shai’hem Thomas combined for a tackle for loss and a sack to stall the Knights’ drive at the Dunnellon 24-yard line, where Vanguard settled for a 41-yard field goal off the foot of junior kicker Grandin Wilcox, beating his previous career-long of 40 yards.

After the Knights forced the Tigers to go three-and-out on the ensuing drive, Dunnellon senior Drew Leinenbach’s punt, which started well inside the Tigers’ own end zone, got out to the Tigers’ 28-yard line.

Before the break, the Tigers and Knights traded short drives as well as missed field goals as Wilcox missed a 33 yarder, and Leinenbach missed one from 37 yards out.

Coming out of half time, the Knights and Tigers both sputtered on offense, as Vanguard punted the football away and Dunnellon committed a turnover with a fumble recovered by Vanguard freshman McKenzie Harris.

Following the takeaway, the Knights were forced to settle for a 40-yard goal attempt, which resulted in another uncharacteristic miss from Wilcox. 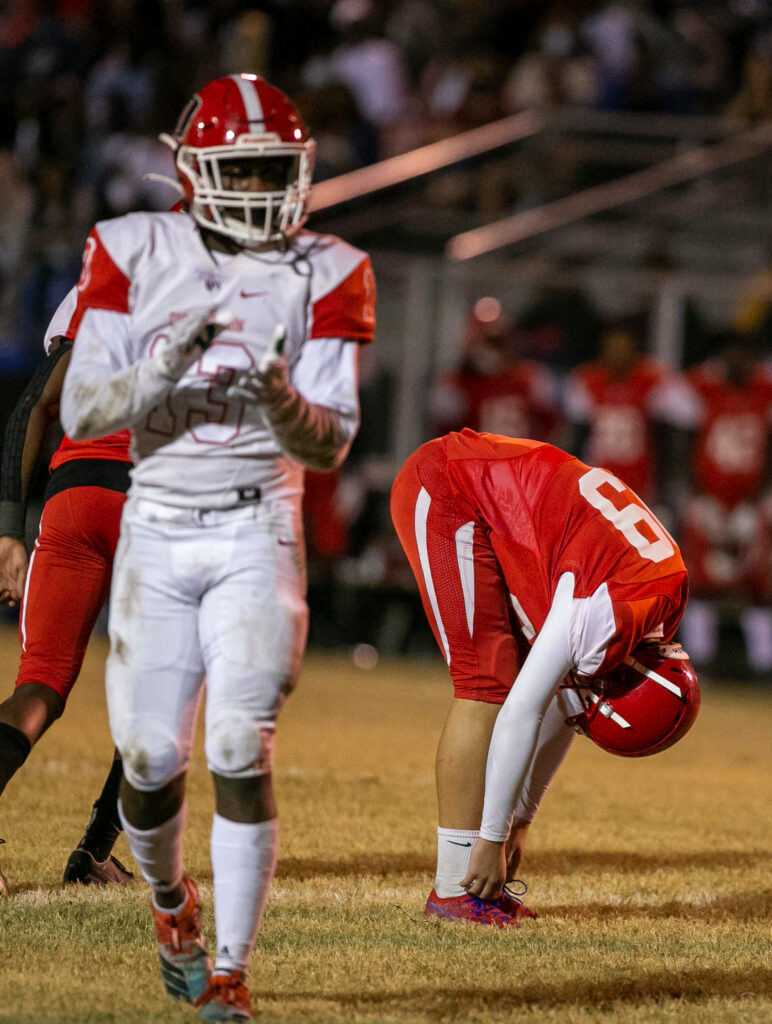 “Truth be told, I thought we had some big stops,” Harris said. “And they missed a couple of field goals and I know that’s going to haunt them.”

Following the missed field goal, the Tigers continued to struggle generating offense. Fortunately, Leinenbach, who also holds punting duties for Dunnellon, lifted a beautiful punt that pinned the Knights at their own 15-yard line.

Vanguard struggled to make work of the 85-yard field and was forced to exercise a punt of its own.

In a drive that began at the Vanguard 41-yard line, the Tigers and their banged up quarterback reeled to generate any kind of offense.

Sparked by a 20-yard rush from junior Brody Luckey and helped by a nice run from Fitzpatrick, the Tigers found themselves on the half-yard line.

Townsend, the 6-foot-1, 218-pound quarterback, albeit somewhat lame from his first-half injury, simply fell forward into the end zone to give Dunnellon a 13-10 advantage with nine minutes to play.

Knowing they had to answer the call, the Knights chipped away at yardage after a 40-yard kickoff return from Mykell Randall had their drive starting at their own 40-yard line.

With the help from a 19-yard rush from Tyrell Randall, a targeting penalty called against the Tigers, a nice run from Betterson, a Law-to-Trevonte Rucker connection and a Law-to-Williams connection, the Knights were faced with a fourth-and-inches scenario from the Dunnellon 2-yard line. 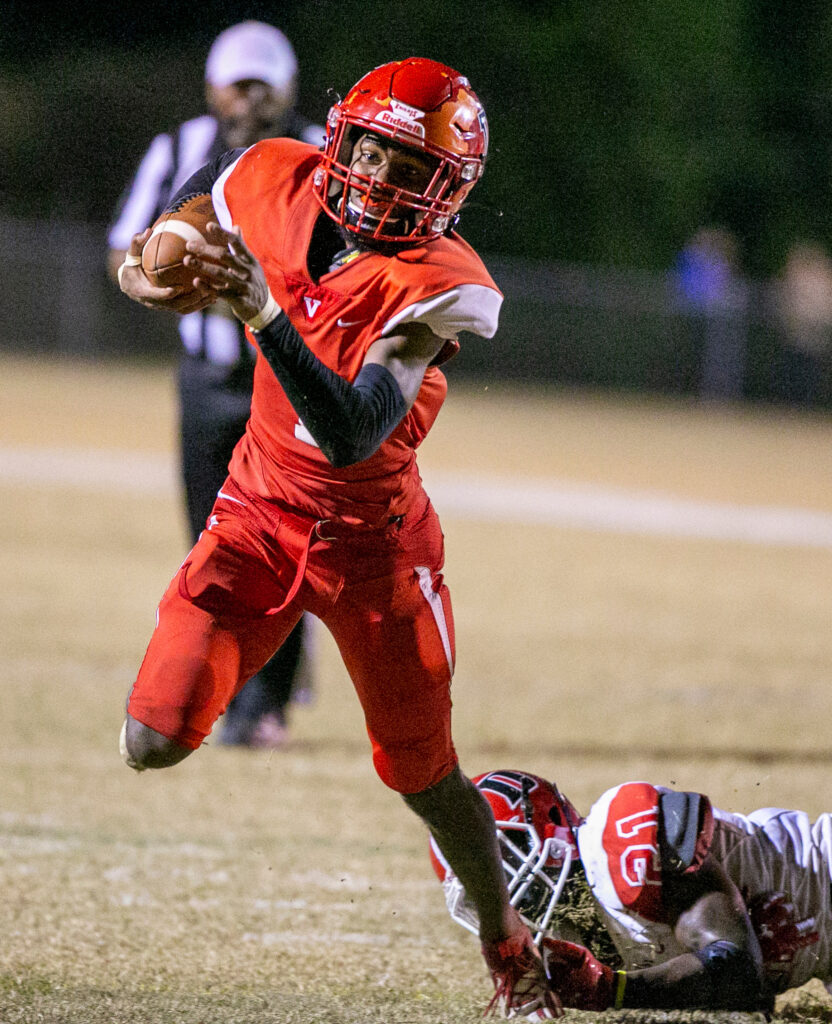 Down three points with under five minutes to play, Vanguard’s Edwin Farmer was faced with every head coach’s nightmare: Kick to tie or go for the win.

Bringing in his power back, a role assumed by 215-pound Ronald Leslie-Farmer, the Knights went for the latter.

With inches to a first down and two yards from the goal line, that task didn’t seem all that tall. But with a focused Dunnellon defensive line, it was.

With quick penetration, the Tigers forced a fumble on a botched exchange between Law and Leslie-Farmer.

With three minutes left on the clock and no timeouts in Farmer’s pocket, the Tigers were able to do just enough to move the ball, burn the clock and end in victory formation.

And with the win, the Tigers advance to the Class 5A Final Four for the second time in three years. Dunnellon will travel to Rickards (Tallahassee) as it looks to punch its ticket to the 5A state championship, hosted at Doak Campbell Stadium at FSU’s campus.

“Hopefully two trips (to Tallahasse),” Harris jokes of the season outlook. “But we’re going to worry about this first one first.”