Drawing from the ‘Brighter Side’ of Life

Jennifer Weigel elevates the medium of markers in her contemporary, expressionistic works. 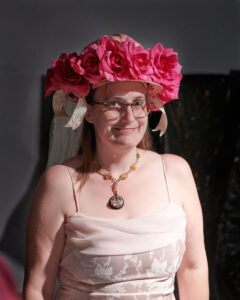 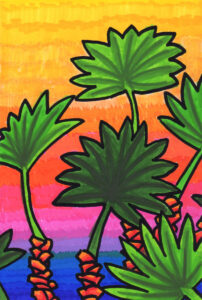 Today’s skyrocketing inflation and the absurdly status-focused trappings of social media have a way of tamping down the creative spirit. Still, fiercely independent artists like Jennifer Weigel prove that the good life can be enjoyed cruising the world of color, imagery and performance, and exploring nature and the human condition.

Weigel splits her time between her home in Kansas and visiting her mom, Judy, in The Villages. While spending time in Marion and Lake counties, she fell in love with the lush flora of Central Florida as well as the unexpected fauna.

The artist’s nature-inspired exhibit, “Looking on the Brighter Side,” not only recalls a Monty Python tune but also reflects Weigel’s newlywed bliss and gratitude for a life well lived. It’s currently on display in Ocala through Jan. 9, 2023, at the City of Ocala’s Recreation and Parks Administration building and Eighth Avenue Adult Activity Center. The free exhibit is open to the public.

With her new works, Weigel hopes to uplift the viewer during what many deem as demoralizing times.

The medium for the vibrant, expressionistic collection comes to us by way of implements once relegated to children’s playrooms: markers.

“I’ve been working a lot with marker on photo paper,” Weigel said. “I discovered the media when a friend was doing Zoom workshops and I joined one just for fun. I grabbed what was handy, which was just a stack of printer photo paper and some cheap markers that I had lying around and discovered that I love that combination because it brings such a vibrancy to my works.”

In the past, Weigel has worked with a wide range of tools and techniques to convey her ideas. The multidisciplinary mixed-media and conceptual artist has created art with assemblage, illustration, fibers, installation, jewelry, paint, performance, photography, video and writing. Much of her work touches on themes of beauty and identity with a focus on gender identity as well as memory and critiques of society’s institutions.

While she enjoys the tactile experience of working with her hands by weaving, making jewelry, drawing and painting, Weigel performs as a conceptual artist engaging in alternative projects, costume, installation, performance and what she calls “subverted street art.” 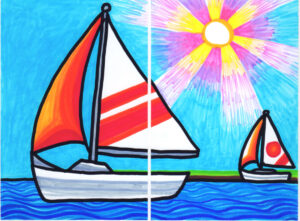 Having exhibited in all 50 of the United States, Weigel takes inspiration from the Fluxus movement, renowned in the late 1950s and 1960s, popularized by conceptual artists including Yoko Ono, who created installations with interactive, mundane elements such as talking on the telephone. While seemingly random, the performances, like modern dance, often challenge viewers to rethink their emotions, habits and interactions — experiences regarded as ordinary in our everyday lives.

“It’s way more spontaneous than other art forms,” Weigel said of her performance art. “A lot of the people that I wind up hanging around in the performance art circle are very engaged in ‘happenings’ … some a written musical score, but the performance may not be anything that’s really specific. It might just be like, ‘Make a salad.’”

As colorful as a big tropical salad, Weigel’s “Brighter Side” works in Ocala tap into something that we can all use more of to deal with the stresses of today — Weigel’s unabashed embrace of joyfulness.

Looking on the Brighter Side by Jennifer Weigel