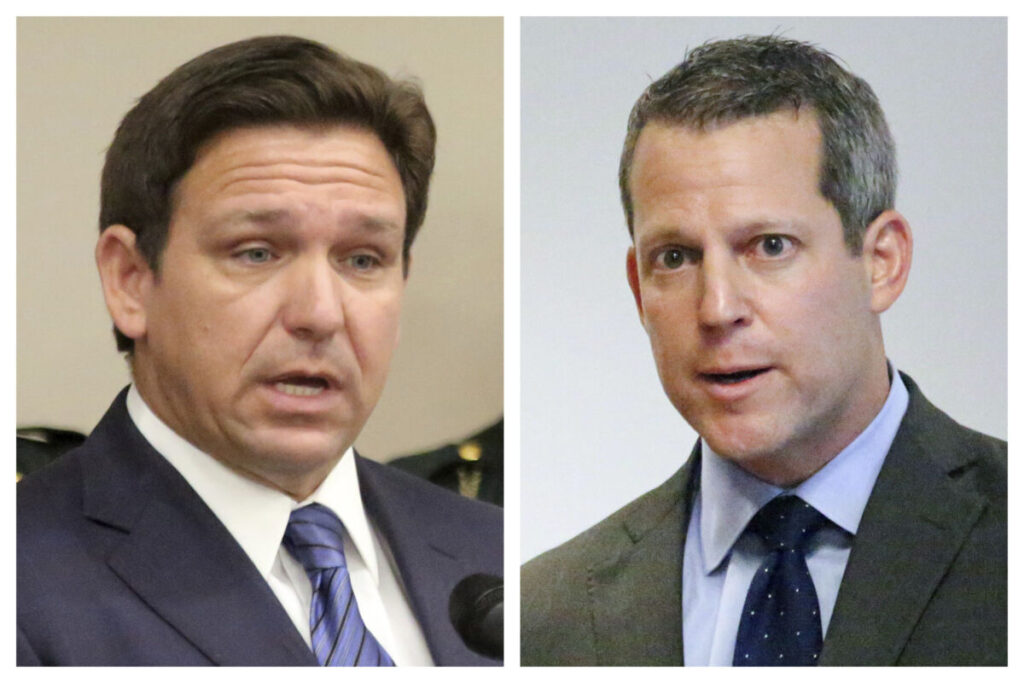 The scholars on Tuesday submitted a friend-of-the-court brief in a federal lawsuit in which Warren accuses DeSantis of overstepping his authority and violating the twice-elected prosecutor’s First Amendment rights.

DeSantis on Aug. 4 issued an executive order suspending Warren, a Democrat, accusing him of “incompetence and willful defiance of his duties.” DeSantis pointed to a letter Warren signed pledging to avoid enforcing a new law preventing abortions after 15 weeks of pregnancy. Also, the governor targeted a statement Warren joined condemning the criminalization of transgender people and gender-affirming care.

But 115 legal scholars from across the country who focus on ethics and the law denounced DeSantis’ action, saying Warren’s suspension “runs counter to professional standards of conduct, usurps the will and power of the electorate and eviscerates the carefully crafted separation of powers erected in the Florida Constitution.”

The group’s brief argued that prosecutors have discretion over how to spend their offices’ resources.

“Elected prosecutors’ public statements on controversial questions of criminal law or procedure are not unethical or unprofessional but fulfill their professional obligation to promote law reform while enabling constituents to assess their views on policy relevant to their work,” the brief said.

Warren’s suspension “for what can only be characterized as purely partisan reasons runs counter to professional standards of conduct, usurps the will and power of the electorate and eviscerates the carefully crafted separation of powers erected in the Florida Constitution,” the scholars wrote,

DeSantis, who is running for re-election this year and is widely seen as a frontrunner for the 2024 Republican presidential nomination, has used his authority to suspend a number of elected officials since he became governor in early 2019.

On Friday, DeSantis suspended four Broward County school board members based on the recommendation of a grand-jury report. In one of his first actions after taking office, DeSantis suspended former Broward County Sheriff Scott Israel for actions related to a mass shooting at Marjory Stoneman Douglas High School in Parkland and a shooting at the Fort Lauderdale-Hollywood International Airport.

DeSantis, appearing at an event in Live Oak on Tuesday, defended his decision to suspend Warren.

“In Florida, we actually said we are going to follow the law across the board, state and local. We had a prosecutor over in Tampa that had said he wasn’t going to enforce laws that he doesn’t like. So, we removed him from his post, and we said that’s not going to happen here,” DeSantis said.

The Florida Senate has the power to remove or reinstate suspended officials. Senate President Wilton Simpson, R-Trilby, has put the proceedings in Warren’s case on hold while the lawsuit is pending.

In addition to abortion and transgender treatment, Warren has clashed with DeSantis on other fronts. For example, Warren criticized the way the state has carried out a constitutional amendment aimed at restoring voting rights to felons who have completed their sentences.

Warren, in an interview Wednesday with The News Service of Florida, accused the governor of using the suspension to score political points.

“I’ve spent my career as a prosecutor and in courtrooms and so I still live in a world where facts matter. I know that the governor is now campaigning for president and so he lives in a political world where apparently, in his view, facts don’t really matter,” Warren said. “The reality is that nobody should want elected officials to have the power to remove other elected officials, just because they don’t like the job that they’re doing or they don’t like who the people are. … This is just, from top to bottom, it’s truly undemocratic and un-American and illegal, and that’s why it’s being challenged in court.”

“Governors do not have the authority to disregard the autonomy and independence of prosecutors, nor are they entitled to undermine the will of the voters by removing a prosecutor simply because he exercises the discretion vested in him to make charging decisions or expresses his views regarding appropriate priorities of the justice system,” the brief said. “Allowing governors to do so would upset the careful balance of roles and responsibilities delegated to local as well as state actors by state constitution, delegitimize our justice system and erode public confidence in the operation of government and the integrity of the election process.”

U.S. District Judge Robert Hinkle has scheduled a Sept. 19 hearing on Warren’s request to block DeSantis’ order. Warren was first elected in the 13th Judicial Circuit in 2016 and was re-elected in 2020. The circuit includes only Hillsborough County.