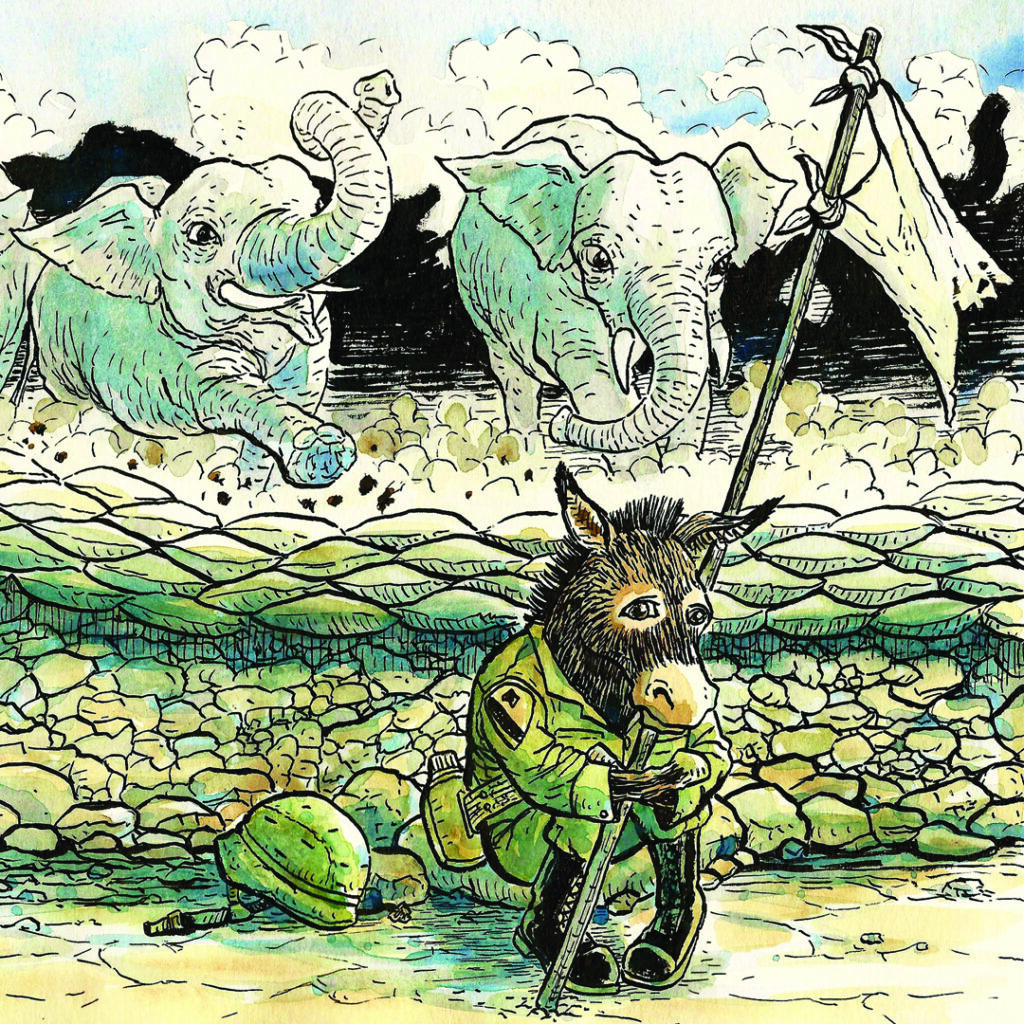 With no Democrats in any of the 10 local races on the November ballot, it appears the Democratic Party has surrendered in Ocala 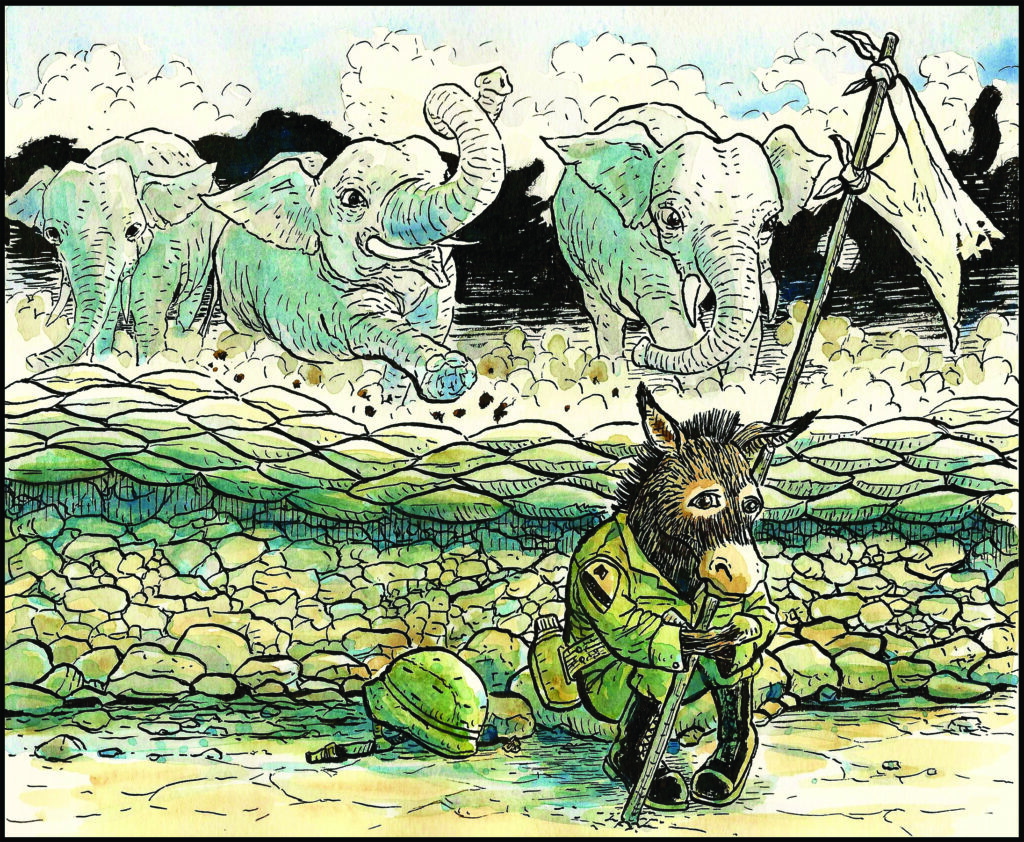 At its start, 2020 promised Marion County voters plenty of action on the local election front.

Ten races for county constitutional offices, meaning those whose duties are spelled out in the state Constitution, were on the ballot.

But a month before Election Day, only one of those races – School Board District 1 – remains undecided.

One reason: As the Democratic Party feverishly seeks to oust President Donald Trump from the White House, local Democrats have failed to show up for local races, which arguably matters most when considering citizen interaction with government.

LaVonda McCandless, chairwoman of the Marion County Democratic Party, said she’s been “overwhelmed” this year by volunteers who want to help advocate the party’s message and promote its causes.

No one, however, wants to actually run for office, she noted.

McCandless believes a few factors have converged to keep local Democrats on the bench. They include the toxicity of the overall political climate, a struggle to raise money, and a lack of recent electoral success.

But, she said, she is hopeful that the party can rebound with candidates for local elections in the near term.

During 2020, a total of 28 candidates entered those county contests at some point.

They included those in School Board elections, which by law are nonpartisan, write-ins, and candidates claiming no party affiliation.

Only one of them – Cynthia Anne Moody – was a registered Democrat, according to election records.

Moody, a candidate for court clerk, failed to qualify. She raised just $55 for her campaign, including in-kind contributions, election records show.

The conspicuous absence of Democrats – in this election as well as recent years – permit the GOP to utterly dominate local offices. Republicans are surely pleased by that, but the outcome also reduces voters’ options.

For example, six of the other nine county elections were settled when the qualifying period closed in mid-June.

Meanwhile, Court Clerk-elect Greg Harrell, who ran to succeed current Clerk David Ellspermann, and School Board member Beth McCall were elected after potential opponents withdrew or failed to qualify. McCall is a Republican, according to election records, even though her race was nonpartisan.

Then, the write-ins dropped out.

As it stands, the only local election voters must decide on Nov. 3 is between Lori Conrad and Allison B. Campbell for School Board District 1. Conrad and Campbell also are Republicans.

Democrats’ poor showing in local elections is not necessarily new.

Four years ago, when these same 10 offices were on the ballot, Democrats ran in just two races: Moody, who ran against Ellspermann for clerk, and Dennis McFatten, who ran for sheriff. Both of them lost handily.

Where other offices are concerned, the Democrats have not had a County Commission candidate since 2012, and that was in only one of three races on the ballot that year. For the board, that translates to 10 Democrat-free elections between 2014 and 2020, since all five commission seats have gone through two election cycles.

For clerk, Ellspermann drew Moody as an opponent in 2016. But that was the first time he faced a Democratic foe since his first election in 1996.

The only local Democrat with staying power was former Sheriff Ed Dean. Dean was appointed to the job in 1998, elected to it in 2000, and subsequently won re-election until he left office in 2012.

“It’s not easy being a Democrat in Marion County,” said McCandless, whose two-year term as Marion’s Democratic Party chairwoman ends in December.

She said potential candidates may have been reluctant to come forward this year because the current political environment is so malicious.

“It takes a lot of money and a lot of energy (to be a candidate), and the chances (of winning) are not very good. A lot of people don’t want to put in the effort in this political climate,” she said.

Speaking of money, McCandless noted many in her party were skeptical earlier this year when she announced a billboard initiative to promote Democratic causes. People were surprised, she said, when the effort raised $20,000 for 12 billboards. McCandless linked the astonishment over the successful fund-raising for billboards to the fact that local Democrats seem hesitant to ask for campaign contributions.

“Democrats don’t have big resources,” said McCandless. “We have a former Republican and she said when Republicans need money, people open their wallets and say, ‘Take what you want.’ If our people ask and get $10, that’s success. You never get the money if you don’t ask.”

Finally, McCandless pointed out her members might be reluctant because they don’t see success.

On that point, consider the party’s most recent wins.

Dean, as sheriff, was the last Democrat told hold office in Marion County. He won his last election in 2008. Before that, Democrat Barbara Fitos defeated incumbent Commissioner Randy Harris in 2006, before she was beaten by Republican Carl Zalak in 2010. The late Dee Brown, the county’s previous elections supervisor, was a Democrat when she won in 2004. Yet Brown switched parties in August 2005.

“It’s very hard for a Democrat to win in Marion County,” McCandless observed.

Currently, the only Democrat in countywide elected office is School Board Chairman Eric Cummings. But, as noted above, School Board elections are nonpartisan.

The Democratic Party fielded candidates for schools superintendent in 2008 and 2012. But they both lost, and no Democrat ran in 2016, the last election before the job became an appointed position.

Aubrey Jewett, a political science professor at the University of Central Florida, said such results are common for Florida counties that lean heavily toward one party or the other.

“The minority party in these counties often have a difficult time recruiting candidates. Most people do not want to invest the time and money running for a seat that will be almost impossible to win,” he said.

“However, sometimes we do see local parties put an emphasis on finding a challenger for most or every race as a way to build the party in the future. Fielding candidates in many races is a way for the minority party to signal to county voters that they have political choices and may mobilize some voters to get active. And, of course, over time the situation can change.”

Jewett used Seminole County, where he lives, as an example.

Traditionally, he noted, the county has been “very Republican.” But it has gotten much more competitive over the last few years. One reason: Local Democrats have shown up on the ballot despite seemingly long odds of success.

Mary Ann Lambert serves as the 2020 campaign coordinator for the Marion County Democratic Party. Her role is to help map strategy for the party around the state.

She said it is a common misconception that the party recruits its candidates.

“People have to want to run,” she said. And once they do, the party is there to help.

Lambert noted that raising money is certainly a challenge. But the real issue may rest in local Democrats’ heads.

“Marion County isn’t as red as some people think,” said Lambert, although the numbers skew strongly Republican: As of Tuesday this week, registered Republicans outnumbered Democrats 120,303 to 83,531.

“But there are some Democrats who truly believe they are the only Democrat in Marion County,” Lambert added. “Psychologically, I think there is a barrier because the Republicans are so entrenched.”

While 2020 is a lost year for the party locally, Lambert added that she hopes the anti-Trump fervor can be harnessed to grow candidates for upcoming elections.

“What’s been missing is a sense of community. But what we’ve been able to do is spark a wave of people ready to get rid of Trump,” Lambert said.

“I think with the psychological shift, some people will see there is a community of Democrats and that some people will be inspired to run. Obviously, we have to work hard to keep it going. But people in the community have to decide they want to dedicate a portion of their lives to that task.”