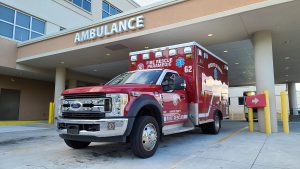 For county officials, developing the next round of projects that will be funded by Marion County’s 1-cent local sales tax seems to be the easy part.

Convincing voters to renew the tax in November may be the main challenge.

At a July 6 workshop, the County Commission got a glimpse of a renewed list of items staff has in store, if the tax is renewed.

One thing that didn’t make the list was a new helicopter for Sheriff Billy Woods.

Woods conceded the $3.8 million purchase of a replacement aircraft in 2023.

He did so to help the County Commission address a projected $4.8 million shortfall in revenue over the five-year life of the renewed tax.

Woods also told the board he would revisit some of the details for his requests for the hangar and the security fencing to try to save the other $1 million.

Yet the sheriff did ask that the helicopter land at the top of the priority list if extra revenue becomes available. None of the commissioners objected.

Meanwhile, the board reached out to the Ocala/Marion County Chamber and Economic Partnership to help sell the tax renewal to the voters.

At the workshop, CEP CEO Kevin Sheilley told the board, “This is our priority.”

He added that the CEP’s political action committee would run a “full-sized” campaign in the fall to rally voter support.

Sheilley said that initiative would focus on reminding voters what has been accomplished with the tax, which passed in 2016 with 55 percent support, as well as what is planned for the future.

A key selling point, he said, will be highlighting that a sizeable chunk of the funding – an estimated 30 percent – has been provided by people who live outside Marion County. That figure includes tourists and visitors from elsewhere who come to Marion to work or for other reasons.