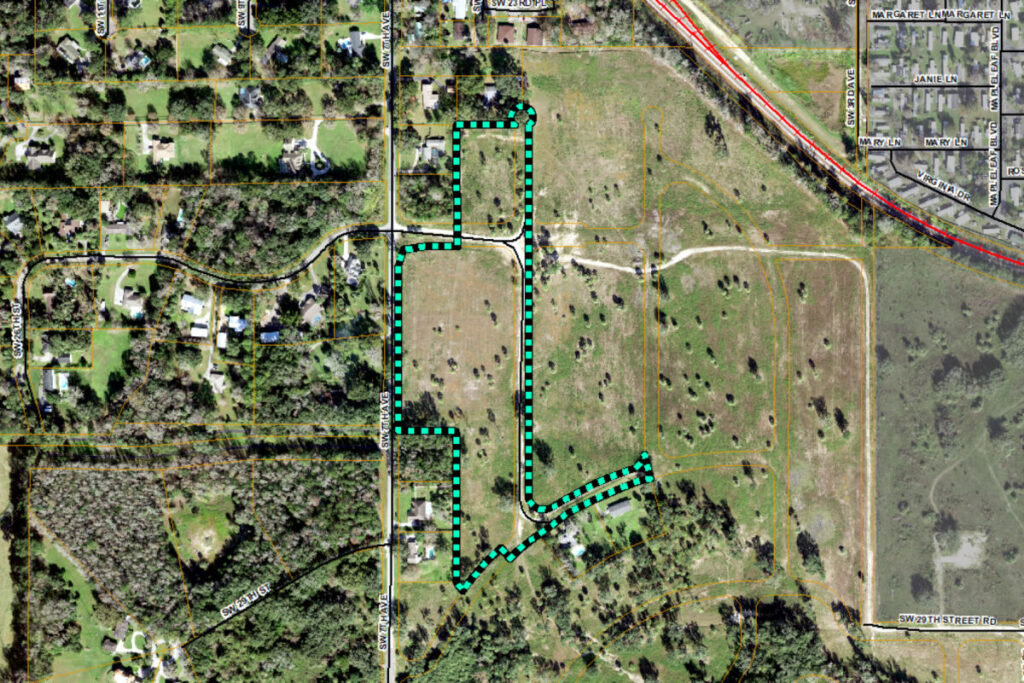 The Marion County Board of County Commissioners (MCBOCC) unanimously approved developer John Rudnianyn’s request Tuesday, June 7, for a land use change from medium residential to urban residential for an approximate 12.36-acre portion of a 21.57-acre parcel located northwest of Lake Louise.

The site is located approximately one-half mile west of South Pine Avenue and less than a quarter mile north of Southwest 32nd Street within a platted and recorded subdivision, Lake Louise Estates, bordering the City of Ocala.

Currently, school facilities serving the area of the proposed land use change are experiencing persistent localized overcrowding, according to a City of Ocala Planning & Zoning commission meeting conducted on Dec. 13, 2021.

Approximately two miles south of the site is Shady Hills Elementary, currently at 87.1% capacity, according to county records. Osceola Middle, 109.6% capacity, is located roughly 1.4 miles to the north of the site.

The closest high school, Belleview High School, is approximately 6 miles away and at 109.13% capacity.

This isn’t the first parcel Rudnianyn has requested to be rezoned for development near Lake Louise. The city recently agreed to allow the developer to annex an adjacent 88.73-acre parcel on Jan. 18. The remaining portion of the parcel—the 12.36 acres—was not included with the annexation because there were a few landowners who were not interested in being part of the city’s annexation. To avoid enclave issues, the city left the remaining property in the county.

Following annexation, on May 3, Ocala City Council approved two ordinances increasing zoning from four units per acre under the county’s zoning laws to 18 units per acre within the city—potentially adding a maximum amount of 1,200 units within the Lake Louise corridor.

Elsa Vasquez, who lives near Lake Louise, said that she cares not only about what happens by her own house but for all of Ocala.

“I never realized how important county commissioners were until I realized the decisions you make and the power that you have in your hands,” she said. “The landscape in Marion County is unique. It’s fragile and resilient at the same time. There is no other state like Florida. It is a treasure and we must take better care of it.”

Vasquez asked the board to not take the decision of approving more development lightly.

“You have the chance to make a difference and utilize your position to show how [Marion County] Commissioners care and listen to the voice of the people,” she added. “Or you can welcome growth in a sustainable way, protecting our environment and the place we call home. Please don’t disappoint us.”

Commissioner Michelle Stone pointed out to Vasquez that the parcel in question near Lake Louise was within the county’s “urban growth boundary”; therefore, it was where development was expected to take place.

Ultimately, the board voted 5-0 to approve the zoning change.