The Gazette’s review of court records, city shade minutes reflect mismanagement of litigation after passing unconstitutional policy that left the taxpayer and Ocala’s most vulnerable paying the price. 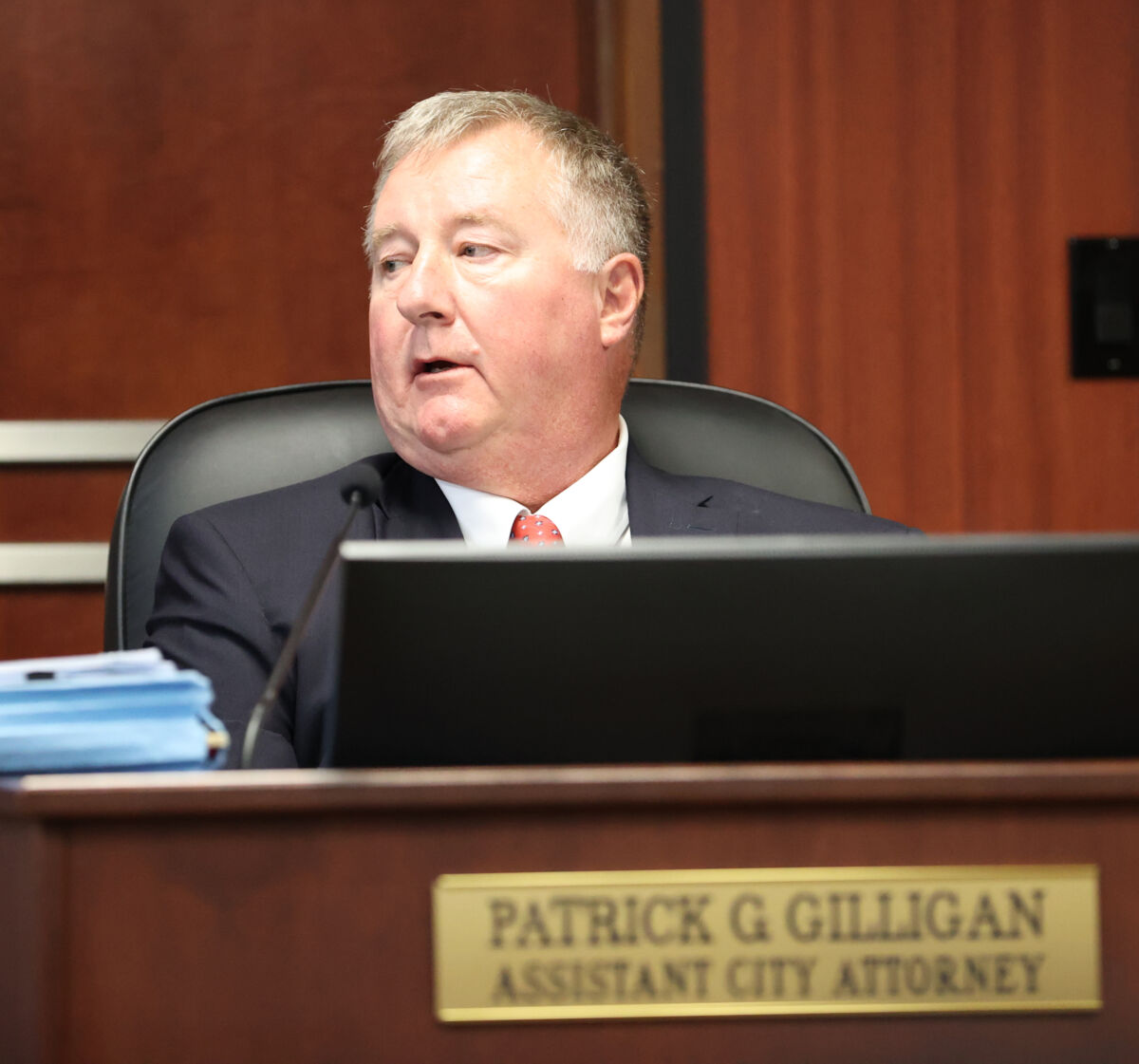 The City of Ocala has weathered a few high-profile court cases over the years that have left many wondering—how did we get here?

Two cases surrounding the city’s code of ordinances for open lodging and panhandling ended, opening to the public what are commonly referred to as “shade minutes.”

Shade minutes are from meetings publicly noticed, but where only the attorney, city council members and the city manager can attend to discuss litigation with a court reporter taking minutes of every word said during the meeting.

The Mayor does not attend these meetings, as under the city’s charter, it’s ultimately up to the council to make these decisions. The two cases, although seemingly related by the Plaintiffs and attorneys involved, had significantly different patterns.

Open lodging aka the “homeless case”

The “homeless case,” filed in federal court in September of 2019, centered around an open lodging ordinance that allowed police to arrest those sleeping outside who admitted to being homeless.

Under the ordinance, the city made 406 convictions against homeless people. Those convictions resulted in 264 people spending 5,393 days in jail at a cost of roughly $360,000, according to the lawsuit.

Each homeless person housed at Marion County jail under the ordinance was fined.

One such example was Robert Leach, 67, who spent 278 days in jail for sleeping on the streets between September 2015 and December 2020, racking up more than $12,000 in fines and fees after nine convictions under Ocala’s open lodging ordinance.

In February of 2021, almost a year and a half after the case was filed, U.S. District Judge James Moody ruled that arresting homeless people who don’t have access to shelters is cruel and unusual punishment violating the Eighth Amendment of the U.S. Constitution.

There was no trial. The federal judge made a summary judgment ruling. Summary judgements are a mechanism the courts can use when the law and facts are such that a trial is not necessary.

According to records supplied pursuant to a public records request, the first shade meeting on the case between the city’s attorney Patrick Gilligan of Gilligan, Gooding, Batsel, Anderson & Phelan, P.A. and city council would not take place until April 2, 2021, more than a year and a half after the filing and months after losing the case.

Other than making the council aware a suit had been filed, the Gazette could find no prior city council meeting minutes where the case was significantly discussed between the city and the council preceding the judge’s ruling in favor of the plaintiffs.

Four of the five council members on the council relayed having no knowledge of how the case was handled prior to the federal ruling. Former council member Matthew Wardell offered that the Mayor managed the litigation with Gilligan since it had to do with arresting people.

The Mayor told the Gazette that he did not manage the suit but declined to give any other information, writing by text message, “I’m not interested however, in participating in this story.”

The Gazette also reached out to Patrick Gilligan with an interview request, but he did not respond to inquiries.

Attorneys’ fees were the main topic of the shade meeting because the city was liable for the Plaintiff’s attorneys fees as they were the prevailing party in the litigation.

“So, you’re probably stunned by that number,” Gilligan said at the April shade meeting. “I don’t think they’re going to get anywhere near that number. We think their fee claim is incredibly excessive.”

In the meeting transcription, Gilligan expounded on the amount of depositions scheduled by the Plaintiffs as being the prime reason their attorney fees were so high.

Gilligan showed a screen capture taken during a deposition via Zoom illustrating to the council how many attorneys and support staff attended for the Plaintiff.

“If you count, I think there’s 11 folks attending the deposition,” he said.

“I could have taken the same picture at every single deposition. And they took depositions like no case I’ve ever been involved in before. They took Chief Graham’s deposition twice, for a total of, probably, a whole day—both times,” Gilligan added.

“We lost,” said Gilligan, referring to the McArdle case. “We lost because there’s a case called the City of Boise case, and it went up on appeal in the Ninth Circuit.”

Essentially, the City of Boise case ruled that it’s cruel and unusual punishment to arrest people that are sleeping outside where they have nowhere else to go. Unless there’s available shelter space, you can’t arrest them.

Gilligan previously told the Gazette that he had gambled on the Supreme Court hearing the case and overturning it.

In the shade minutes, Gilligan explained to the council that when the Supreme Court denied hearing the City of Boise case, the Ninth Circuit’s decision in the case became the default law of the land.

Court records reflect that the Supreme Court denied hearing the City of Boise case on December 16, 2019, just two months after the suit was filed against the city.

Gilligan gives no explanation in the shade minutes as to why the litigation continued for another year and a half after the Supreme Court denied hearing the City of Boise case.

During the shade meeting, Gilligan downplayed the city’s harsh policies and even the homeless problem to the council.

“Our city is pretty progressive in terms of our treatment of the homeless,” said Gilligan on April 2. “But the dirty little secret about dealing with the homeless is that if you provide services, you get more homeless people because they all have cellphones. They all talk, and so they, naturally, migrate to those cities that have the best services.”

Gilligan went on to say that the homeless are not “unsheltered.”

“Most of them are all in tents, and pretty nice tents,” he said. “Now, I’m not trying to make out like they’ve got a home or anything, but they’re given tents, primarily by the Methodist church up here on Fort King. They’ll give them a clean set of clothes once a week. They’ll give them these tents that will sleep four or five people.”

Gilligan contested that many higher courts don’t understand the homeless crisis in America.

“A lot of people are not really homeless because they’ve got nowhere to go,” he challenged. “They’re homeless by choice.”

Ultimately, the city paid attorney’s fees and costs for both sides, and the Plaintiffs who were part of the suit were made whole with their fines.

The city changed the ordinance slightly to follow the federal court’s ruling.

The problem that remains is that the federal order provided no other relief to the homeless population who still owed fines following their arrests under the faulty ordinance.

An attorney for the Plaintiffs, as well as lead attorney in the Luebke (Panhandling) case, Chelsea Dunn spoke to the court’s decision not to certify the lawsuit as a classaction, “Ultimately, I think we helped everyone in our purported class suit…because once the court’s order came down, the city stopped enforcing that ordinance because there wasn’t available shelter for all those individuals who were being arrested.”

Since the court did not agree to certify the class action suit the other homeless people arrested under the faulty ordinance would need to file additional suits to obtain relief. Dunn said that she and Southern Legal Counsel haven’t forgotten about the many homeless in Ocala, who, upon being arrested before the previous ordinance on open lodging still owe large amounts of money in court fees.

Though it is possible that some individuals paid their fees off, she added.

“It is something we’re still interested in,” said Dunn. “We would like to help people who are affected. We just haven’t moved forward yet on actually trying to remedy those issues. But certainly, it’s an issue we are fully aware of.”

“This is a factually straightforward case,” said Gilligan later in the same meeting. “We have an ordinance. We’re enforcing it. They say it’s unconstitutional.”

Council member Jay Musleh asked Gilligan if Mayor Guinn could stand up at a future council meeting and “charge at windmills,” claiming the council had “no spine” and veto the ordinance rescinding the previous ordinances.

Gilligan said the mayor could.

“It’s an ordinance, open to repeal,” he said. “I can’t say without talking to him, but I haven’t sat down and shown him what we’re up against.”

The panhandling suit was filed on April 19, 2021, and settled very quickly compared to the open lodging case.

Commentary by the Ocala Gazette Editorial Board

We are unsure who should take blame for the protracted litigation in the open lodging case that cost the taxpayers quite a bit in attorneys’ fees and left the homeless bearing the financial burden.

There seemed to be confusion over whether or not the Mayor managed the litigation as well, since it involved “arresting people,” leaving us to wonder who was making decisions throughout the process.

The shade meetings, granted under Sunshine Law for the city to discuss pending legal matters with its attorney, were meant to only be a temporary pass on public transparency. Transcriptions of these meetings are vital to giving the public a way to hold those in power accountable for the decisions that impact them.

Perhaps the most disconcerting element reflected in the shade minutes was the city attorney’s dismissal of the value of the lawsuits to fix the failed policy.

Gilligan said the litigation brought in both cases was an effort to bring about social change, using legal fees as a “cudgel.” He also referred to the prevailing party’s legal fees as a “jihad” against the city.

“If you want societal change,” said Gilligan, “the place you go do it is you talk to your local councilman, your county commissioners, your state legislators or your congressman. You don’t mount these type of lawsuits, try to run up the fees as much as possible.”

These cases—open lodging and panhandling both—represent only two recent examples of city policy being challenged as unconstitutional in the courts. Many people, including the prior city manager, spoke at city council meetings and workshops about finding a better solution. Yet, it took a lawsuit to bring the social change necessary.

Let’s not let these failed ordinances pass us without asking the council to take greater care in their policy decisions—particularly when it comes to the most vulnerable portion of our community.

The below documentary was released in April of 2021. It reflects instances of arrests under the city’s previous open lodging ordinance.