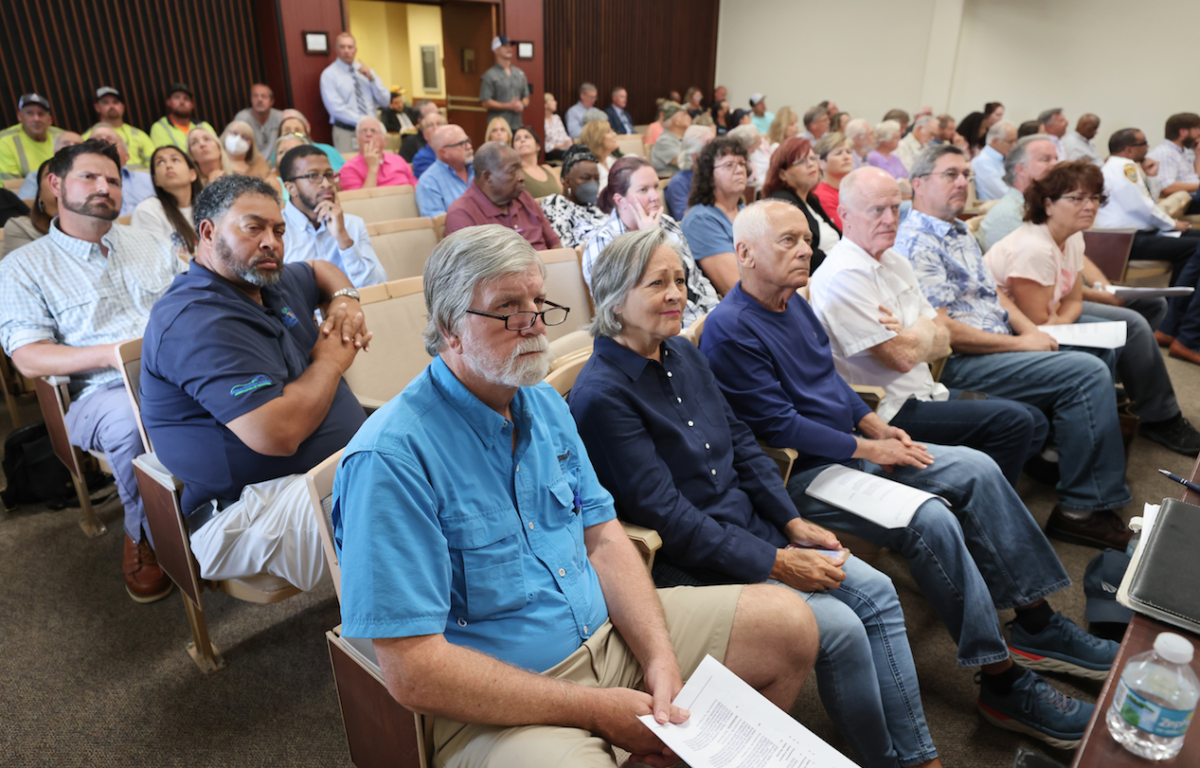 People listen during the City Council meeting at Ocala City Hall in Ocala, Fla. on Tuesday, May 3, 2022. [Bruce Ackerman/Ocala Gazette]

The Ocala City Council has unanimously voted against a development agreement for a Georgia company, Catalyst Development Partners II, LLC, to build a multifamily residential development consisting of a maximum of 320 units on the east side of Southwest 43rd Court in the 3600 block, across from Saddlewood Elementary.

The May 3 regular meeting was standing room only, with many members of the public sitting just outside the meeting room chamber, lined up down the aisles and into the downstairs lobby.

After two prior public hearings on March 1 and March 15, council postponed their vote on April 19.

The development agreement considered by the council would have would have allowed 12 units per acre, under “R-3 Multi-family Residential” zoning classification.

Attorney for the applicant, Fred Roberts, argued to the council that the city had previously anticipated future land use for the property to be “Medium Intensity/Special District,” which would allow for a minimum of five units per acre and a maximum of 30 units per acre.

City staff had previously expressed apprehensions about congestion in the area of the proposed development, according to city documents, including a lack of infrastructure for schools and roads specifically.

Council member Jay Musleh said that the city seemed to expect that the addition of improved infrastructures would solve a lot of the traffic and school capacity issues associated with the development.

“And it probably will,” said Musleh. “But we haven’t seen it yet. And we don’t know when we’re going to see it. It could be 18 or 24 months from now. It could be 36 months. This is unlike any development that I’ve seen up here for the last 10 years and voted on and approved. It’s a very intensive corridor.”

Regarding his vote, Musleh said, “We should delay it until we have seen the roadway constructed and completed.”

“I think we should have the infrastructure at least paid for before we approve this,” he added.

Tye Chighizola, director of Growth Management for the City of Ocala, showed a map to the council illustrating 16 projects in the corridor that Saddlewood Elementary is positioned within, equaling a possible 8,600 units, many of which multifamily or mixed-use.

Regarding school district overcrowding, council member Barry Mansfield asked Chighizola how he thought the city was going to work with the school board on remedying the issue. Chighizola said that most of the overcrowding in the schools was taking place in the southwest corridor, affecting Osceola Middle School within the city and West Port High School beyond that.

Mansfield asked if the children living in the new proposed development would “strictly go to Saddlewood [Elementary],” to which Chighizola affirmed that they would.

Liberty Middle School and West Port High School are also zoned to serve students who would live on the proposed property.

Chighizola explained to the counsel that the school board has certain limitations—as does the city.

“They just can’t go build a school. They have state requirements that they have to live by in terms of building a school,” he said, adding that there is definitely an issue in the southwest corridor regarding school capacity and overcrowding.

The director of Growth Management told the council that traffic capacity would be met in the affected corridor upon the building of a four-lane highway. But when Musleh asked City Manager Pete Lee if the city had the money to build the four-lane highway, Lee admitted that they didn’t at that time and were waiting on state funding.

City engineer Sean Lanier informed council that the city did have a two-lane roadway fully budgeted to join 43rd Court, but Musleh said the infrastructure in that area is so “woefully inadequate” that a two-lane road would be like “putting a bandage on a gash.”

Council member Kristen Dreyer said, “The school board needs to come up with its own plan for their school overcrowding. Then, as a board, they have to come before us and ask us for help with concurrency. That’s what has to happen. We’re trying to help them but they have procedures that they have to do prior to anything that we can do on our end.”

Chighizola then outlined the “catch-22” position facing the school board in working to improve school capacity and overcrowding, especially, he said, “when all the development occurs in one area.”

“We have 11 private schools. We have 4,000 seats vacant availability, when you look at the whole county. And again, a lot of that availability is in the northeast, in the southeast. There is plenty of capacity there. And that’s what hinders the school board. The state sees those vacant seats and says, ‘You still have capacity in your school system. You have to figure that out, redistrict and redo those things. That’s why they won’t give the money to build further schools.”

School board member Allison Campbell, who represents District 1, spoke to the council on Tuesday during public comment, hoping to provide more information and perspective on the school capacity and overcrowding issue affecting Saddlewood Elementary and other schools in Marion County.

“Today, the enrollment for that school is 966,” said Campbell. “So we’re even further over capacity today than we were then when the original numbers were submitted.”

Even at 945 enrolled students, according to Florida Department of Education (FDOE) date collected in 2021-2022, Saddlewood Elementary had 138 more students than FISH capacity or 124.91% over capacity.

According to FDOE data, Liberty Middle is 111.64% over FISH capacity. West Port has the highest percent total capacity of any other public high school in Marion County at 112.32% or 2,754 students to the recommended FISH capacity of 2,452. But these numbers do not include the more updated numbers associated with Saddlewood that Campbell presented to the council.

Campbell explained that Calesa Township does have a charter school that takes 200 students—but no more.

Referring to earlier comments made by Dreyer, Campbell acknowledged that the councilwoman indeed sits on the inter-local agreement committee to discuss these issues twice a month with a fellow school board member. But for more than a dozen years, said Campbell, nothing has been done to that inter-local agreement prior to 2020.

“I’ve been [on the school board] for 16 months,” said Campbell. “We’re playing catch up now. These issues in the southwest part of the county are only going to grow. But when the state looks at how we’re going to fund those things, it’s not as simple as just saying we need a new school.”

Dreyer called the Saddlewood corridor “an interesting governmental crossover of city, county and school board.” A lot of the time, she added, residents look to the city council as the “end all, be all” because they have an Ocala address, but that isn’t always the case.

“Sometimes, to their detriment, that isn’t the situation that they’re currently in,” Dreyer concluded.

Campbell mentioned that the school board would be having a work session on May 19 to specifically address development in Marion County and its impact on school capacity and overcrowding. 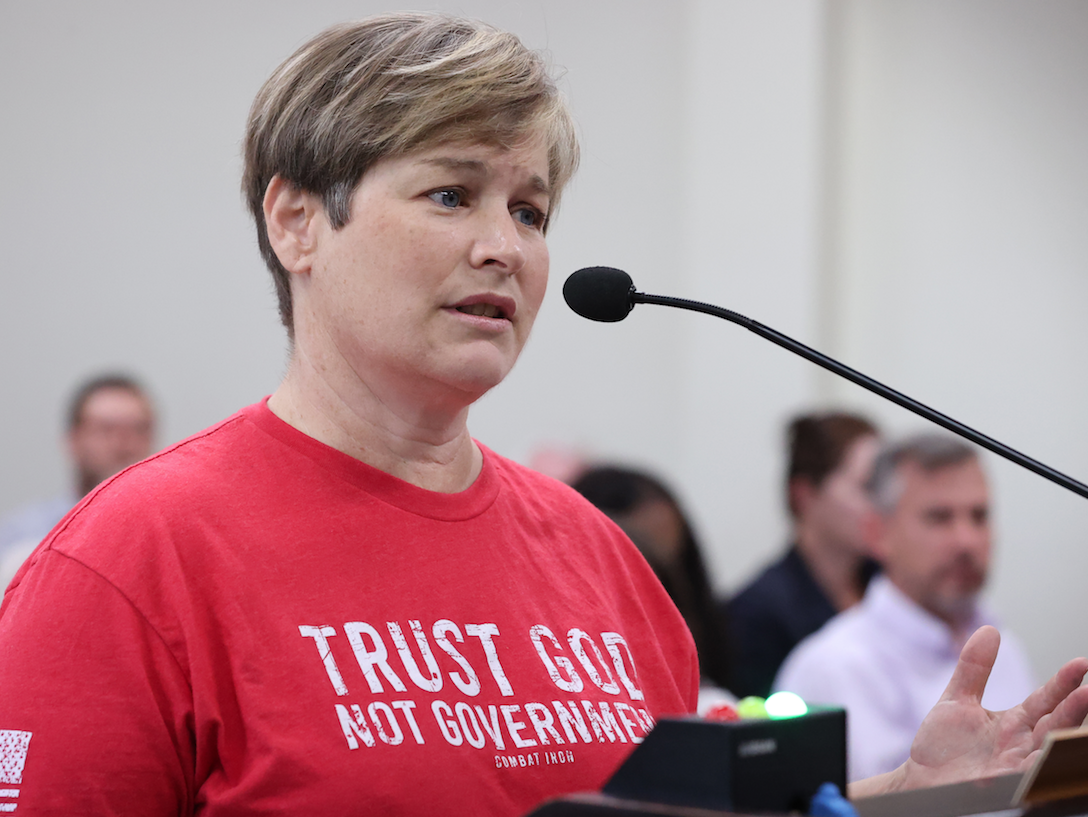 Brigitt Smith, who lives near the proposed development, spoke up at the meeting on Tuesday greatly concerned with potential traffic issues compounding the issues that already exist on roads near the parcel.

“My granddaughter attends Saddlewood Elementary. I pick her up and take her there three days a week. So I see firsthand the traffic and that intersection [near the school] is abominable. [We’re] literally in line for 45 minutes. We understand that growth is coming. It’s developers’ right to get and develop this property. But we need access roads.”

Sarah Williams told the council that she has lived in Marion County for 16 years. She previously lived in South Florida where she said it was already overpopulated.

“When we moved here it was a nice change to see a little bit of country mixed in with city life,” she said, adding that the city used to be “pickier about what developments or businesses went certain places.”

“Now, when you drive around, all you see is construction and the country feel is diminishing,” Williams said. “I don’t want to watch Ocala turn into a crime-filled place where nobody wants to live.”

One member of the public said she lived in an enclave near the proposed development. She said she was surrounded on all three sides by the city while still living in the county.

“Technically, I guess I’m not a constituent because I can’t vote for any of you,” she said. “But what you do still affects me and my family and my community.”

Cindy Janeiro confessed her exhaustion to the council, coming to meeting after meeting saying the same things.

“It’s getting tiresome,” she said. “We elected you for smart, responsible growth. This is not smart, and it’s not responsible.”