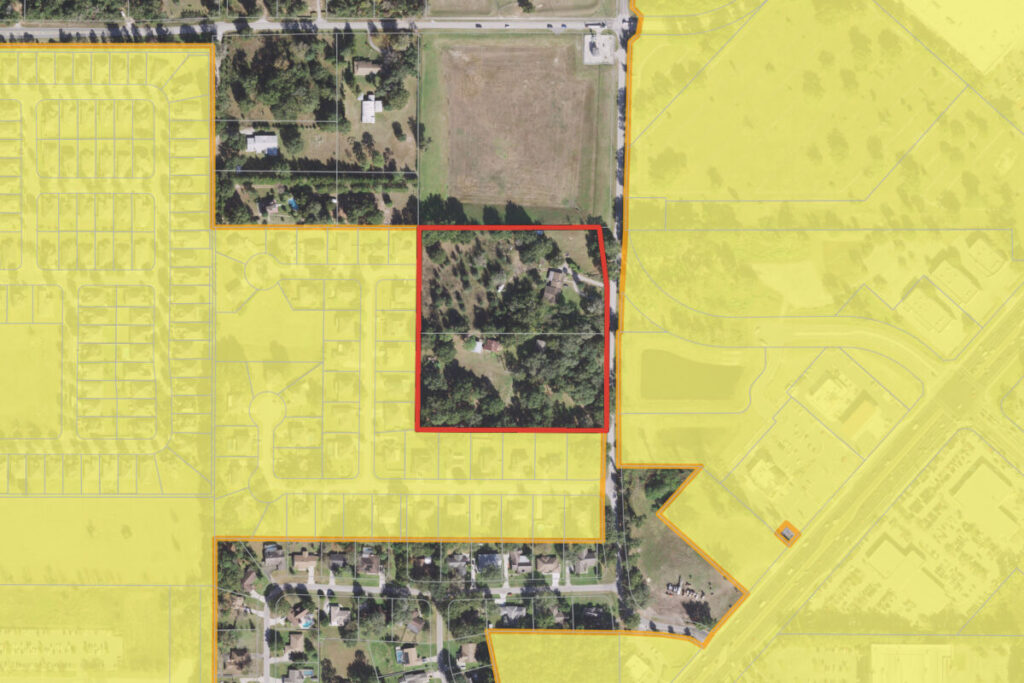 On May 17, the Ocala City Council denied approval of a planned multifamily development of 84 potential townhomes near Southwest 43rd Court behind Cheddar’s Scratch Kitchen and less than half a mile south of Saddlewood Elementary.

There are currently two single-family homes on the proposed property, both built in 1953 on two separate parcels and zoned “Agricultural” under the county.

Cay Ventures, LLC, owns the north half of the site, while BDG Albee, LLC, owns the south half. Belleair Development Group, LLC, based out of Pinellas Park, is developing the property, proposing a density of 8.58 units per acre.

Previously, on May 3, the city council had also voted to thwart a proposed development of 320 potential units near Saddlewood Elementary, slightly south of the above-mentioned Planned Development (PD), which shared similar concerns for council members of overcrowded schools and long-standing traffic issues inherent to the area.

Considered as four agenda items all interconnected, the city council voted unanimously to annex the 9.1 acres into the city from the county, as well as voted 4-1 to change the land use category to “Neighborhood,” replacing the county’s “Low Residential” designation.

However, city council voted 2-3 against both rezoning the parcel to “Planned Development” and the applicant’s development plan for the property. Council members Kristen Dreyer, Jim Hilty Jr. and Barry Mansfield all voted “nay,” while Jay Musleh and Ire Bethea Sr. voted in support of the measures.

Originally, the Planning and Zoning Commission recommended denial of the plan in June 2021. City officials worked with the developer on several revisions of the plan. Though city staff recommended approval of the new plan, the commission was still split 3-3 during its April meeting.

Council members admitted openness to development on the property, but did not support the density of the townhomes and the traffic it could produce near Saddlewood Elementary.

“Smart growth comes up a lot,” said Hilty on May 17. “That area is already oversaturated, just for traffic alone. We have to solve it with what we’re trying to do with the 44th Street [expansion] first. At some point, you just have to look at the whole picture and say that it’s not the right time.”

Dreyer said that she was in agreement with annexing the 9.1 acres and designating them a future land use category but did not think the project’s design and scale of units were compatible with the neighboring property.

“And the access to this project falls short as well because it misses the four-lane highway,” Dreyer added.

The Northwest-Southwest 44th Avenue extension project, according to Sean Lanier, director of Water Resources/Engineering for the city, who presented information to the council on May 17 on the $16-million project, is located north of Saddlewood Elementary.

According to city staff, when completed, the entire corridor will host a four-lane road from S.R. 200, crossing S.R. 40 and moving up towards U.S. 27. However, completion of the project is dependent upon the city receiving $8 million in appropriated money from the state government and would take a calendar year to complete construction.

Cynthia Janeiro, who had previously attended the May 3 regular meeting to voice her concerns against the proposed development across from Saddlewood Elementary, spoke out once again last week.

“This development really affects me and everyone in my neighborhood,” she began. “Once again, I’m here battling developments that will shatter the southwest. The fact is we are overcapacity and our schools are bursting at the seams. Even an 85-unit complex will have a negative impact on me, in my neighborhood and on our schools. Traffic is unbearable already.”

Janeiro asked the council what Ocala was going to look like in 10 or 20 years.

“Are we still going to be horse country or are we going to be Orlando?” she asked the council further. “Because I need to know. Because if we’re going the Orlando-route, then we are moving.”

The applicant could reapply in one year with a new PD proposal, according to Tye Chighizola, growth management director for the City of Ocala, or sooner with a waiver from the council. They could also request a lower land use, allowing for 30 to 35 single-family homes on the property.