Championing a Great Cause 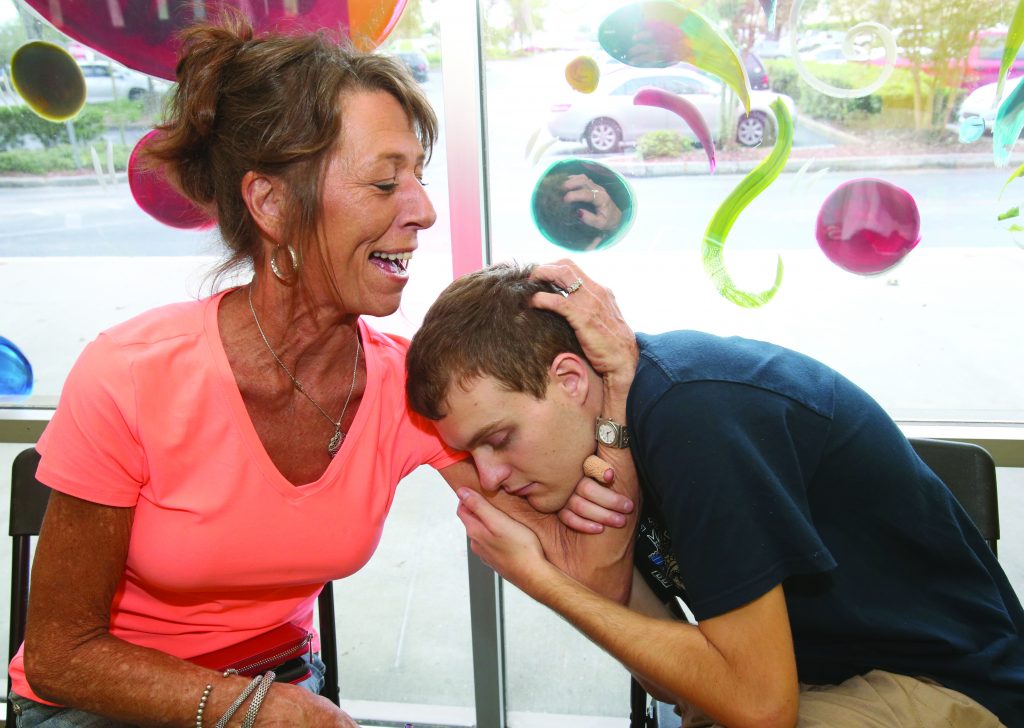 Laura Suber spends some time with her special needs godson, Sean Finn, 20, during a gathering of the Champions For Champions group at Just Kid’n Around. [Bruce Ackerman/Ocala Gazette] 2020. 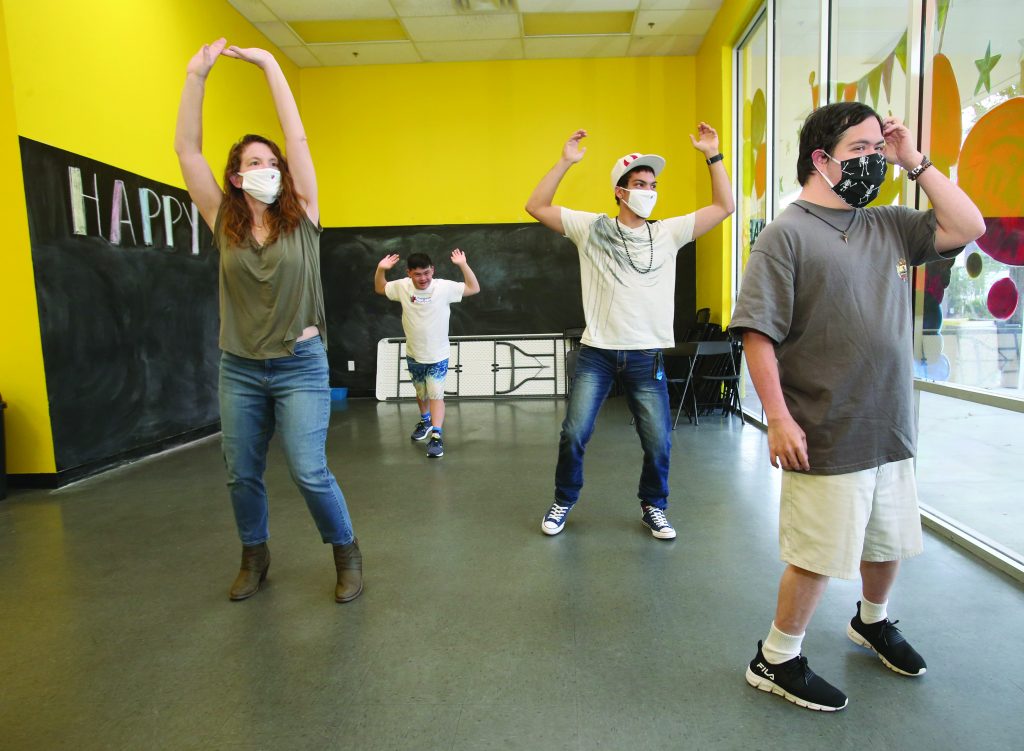 Maria Roman understands the challenges of being the parent of a child with special needs. Don Nottingham built a sports career on clearing obstacles from his path. Together, they bring their life experiences to the forefront in helping others.

Roman is the executive director and Nottingham is president of Champions for Champions Inc., which has mission to enrich the lives of families through facilitating and providing recreational, educational, athletic and life skills activities for people with special needs in Marion County.

Group activities include music therapy, bowling, socials, dances, swimming and a Toastmasters program. To help provide the various forms of programming, the organization hosts fundraisers, such as three events coming up in October.

And, given Nottingham’s career as a football star in college and then as a running back for the Baltimore Colts and Miami Dolphins of the National Football League (NFL), for which he became known as “The Human Bowling Ball,” you can bet that some of his NFL alumni pals will be involved.

In keeping with the need for social distancing during the pandemic, each of these events—a virtual pageant, and a dinner and clay shoot with members of the NFL Alumni Association—will be geared to keeping everyone safe as they help support Champions for Champions.

“With the dinner, for example, although the venue has a capacity of 300 people, we will limit tickets to 100 people,” Roman said. “Attendees will still have the opportunity to talk with have photos taken with NFL alumni, but we will require masks and social distancing.”

Nottingham is chairing the dinner and clay shooting events with Phil Smith of the Saint Louis Cardinals. In past years, according to organizers, supporters of both events have included Mark Duper and Larry Sipples of the Miami Dolphins; Fred Stokes of the New Orleans Saints; Riley Cooper, who played for the University of Florida and the Philadelphia Eagles; Larry Ball of the Tampa Bay Buccaneers; Wayne Cashman, who played for the Boston Bruins and is a NHL Hall of Famer; Gamalier “Baby Bird” Rodriguez, who won the North American Boxing Association Featherweight Title; Nate Samson, who played for the Chicago Cubs; and a host of other sports celebrities.

Roman said that international fashion and costume designer Kirsten Regalado is helping with the pageant. According to her website, Regalado “has been dressing local and international pageant contestants, including more than 1,000 titleholders in the past 10 years. Ms. Regalado has a long list of clientele, including one of the world’s longest running beauty pageants, Miss Universe.”

“We already have entrants from Japan and the Philippines and are hoping for more from at least eight countries,” Roman noted. “This is an opportunity for us to spread awareness about the beauty within all of us. We can all be proud that it’s all coming from Ocala. There are no cash prizes, but it makes for great bragging rights!”

Laura Suber spends some time with her special needs godson, Sean Finn, 20, during a gathering of the Champions For Champions group at Just Kid’n Around. [Bruce Ackerman/Ocala Gazette] 2020.

Here are details about each event:

The fourth annual UniversAbiltiy Pageant is open to toddlers, teens and adults with unique abilities. Interviews will be held via Zoom with international judges.

All participants will be given a participation certificate. Winners of the primary titles will be crowned and presented with a sash. Sub-category winners will receive a sash. An optional category is talent, which is judged separately and will be awarded a trophy and sash.

To register, go to the UniversAbility Pageant page on Facebook and complete the form and submit payment of $15 via PayPal no later than October 5th.

Join Nottingham and some of his NFL Alumni pals at 6 p.m. Friday, October 23rd, at the Southeastern Livestock Pavilion Auditorium. Be sure to ask Nottingham if you can see his giant Super Bowl championship ring!

There will be an opportunity for autographs from the attending NFL Alumni and attendees are welcome to bring an item to have signed.

Members of Champions for Champions will dance, sing and give an oratorial presentation utilizing their Toastmaster’s skills. Magician and mentalist Brian LaPalme will entertain. The meal will be catered by LongHorn Steakhouse. There also will be auctions and prizes.

With the social distancing requirements of the Centers for Disease Control, tickets are limited and there may not be any sales at the door.

To purchase tickets by credit card with no added fees, call (866) 996-2182, extension 1; or purchase at Eventbrite via Facebook ChampsAbility, for which a surcharge will be applied. 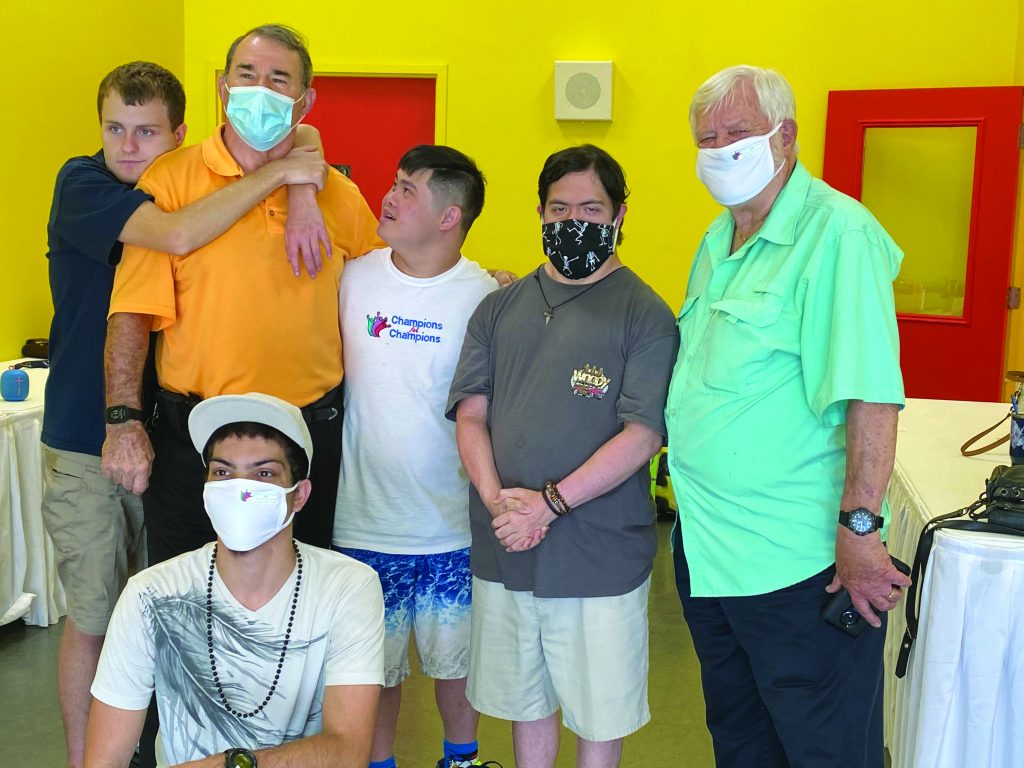 The fifth annual event offers an opportunity to meet and greet NFL Alumni and share a morning of competitive clay shooting and a catered lunch.

Awards will be given to first, second and third place teams during lunch. There also will be raffles and auction items.

The cost is $75 per person or a team of five for $375. All participants will receive a gift bag. To reserve your spot, call (866) 996-2182, extension 3, or register at Eventbrite via Facebook ChampsAbility, where a surcharge applies.

To learn more about Champions for Champions, visit www.championsforchampions.org, find them on Facebook or call 866-996-2182.