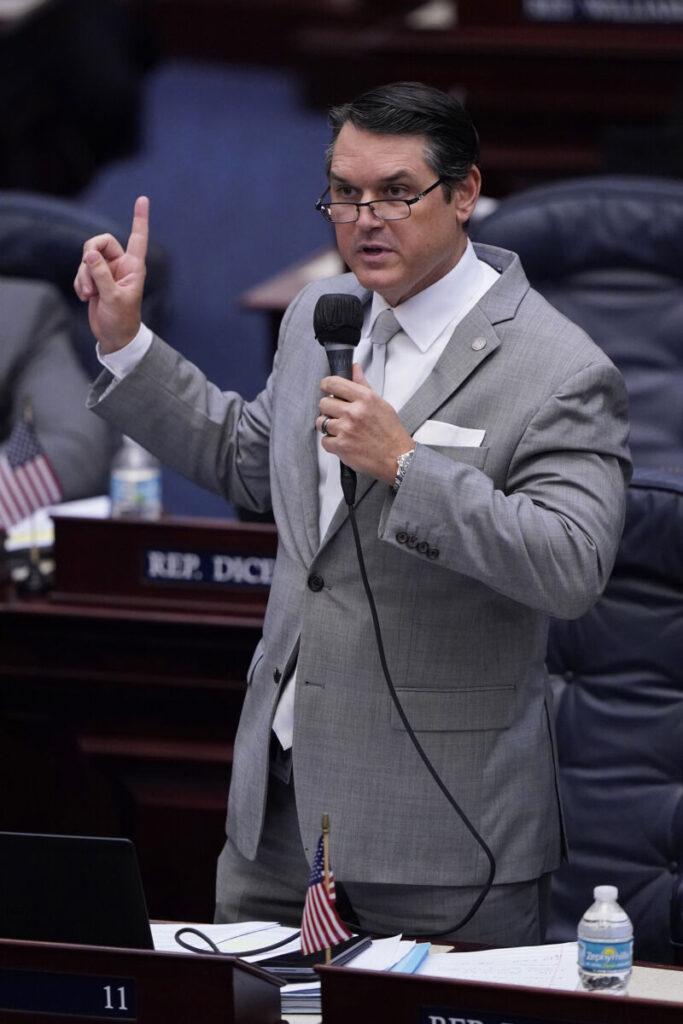 Florida Rep. Cord Byrd speaks during a legislative session, Wednesday, April 28, 2021, at the Capitol in Tallahassee, Fla. Florida lawmakers were poised to finalize new rules on voting by mail and tighten ID requirements for routine voter registration changes — as Republicans hailed their state as a national model while Democrats had neighboring Georgia weighing heavily on their minds. [AP Photo/Wilfredo Lee]

Florida’s top elections official said Tuesday that voters should be confident in the state’s voting process, including when casting ballots by mail.

But when asked about the 2020 presidential election, Secretary of State Cord Byrd said there were “irregularities” in other states and refused to say whether President Joe Biden won the election.

Byrd, who served in the Florida House until Gov. Ron DeSantis tapped the Neptune Beach Republican as secretary of state earlier this month, told reporters that Florida needs to be proactive in combatting efforts to interfere with upcoming elections.

“Voting is a right and we want to encourage everybody that wants to exercise that right that they have that ability,” he said prior to addressing the Florida Supervisors of Elections association at the group’s mid-winter conference in Miramar Beach.

“You just heard in some of the training this morning that we send out cards to people who are eligible to vote but unregistered,” Byrd added. “So, we are doing our part at the state level and the supervisors are doing their part at the county level to provide as much information, as much access to the ballot as humanly possible.”

DeSantis’ May 13 appointment of Byrd, who was at the forefront of some of the most controversial legislation supported by the governor, to succeed Laurel Lee immediately drew pushback from Democrats. Lee stepped down from the post to run for Congress.

House Democrats were quick to question Byrd’s temperament, calling him a “conspiracy theorist” and a “hyper-partisan GOP loyalist.”

In March, DeSantis appointed Byrd’s wife, Esther, to the State Board of Education.

The Byrds left Twitter after Esther Byrd drew criticism for tweeting about the storming of the U.S. Capitol by supporters of former President Donald Trump on Jan. 6, 2021.

Asked Tuesday about the 2020 presidential contest, Byrd repeatedly said that Biden was certified for the office by Congress.

But when pressed about whether Biden won the election Trump, Byrd pointed to issues with voting in several other states.

“He was certified as the president. He is the president of the United States,” Byrd said of Biden. “There were irregularities in certain states. … I’m not the secretary of state of Wisconsin or Pennsylvania or Arizona. That’s up to their voters. We in Florida had a successful election in 2020. And that’s what I want to continue to have in 2022.”

Florida’s 2020 election was “successful and accurate. The governor has made that clear,” Byrd said. Trump defeated Biden by more than three percentage points in Florida.

“But we also know that people want to interfere and sow chaos, and they get smarter and more creative,” Byrd added, defending controversial election-law measures approved by state lawmakers over the past two years. “Just like you don’t wait until there is a fire in your house to buy a fire extinguisher, we can’t wait for a problem to surface to address it when it comes to election laws.”

As part of their conference Tuesday morning, elections supervisors shared repetitive steps they continue to take to keep ballots secure as they implement recent changes to the voting process.

“We are all going to be under a microscope this year like we have never ever been,” St. Johns County Supervisor of Elections Vicky Oakes told her colleagues.

After Trump’s defeat in 2020, Republicans across the country argued that steps needed to be taken to combat voter fraud.

The GOP-controlled Florida Legislature last year approved a sweeping election-law measure that in part restricts supervisors’ use of “drop boxes” for submitting vote-by-mail ballots, prevents groups from providing items such as food and water to voters waiting in line at polling places, and imposes additional regulations on voter-registration organizations.

Voting-rights groups filed a lawsuit challenging the 2021 law, arguing that it was intended to make it harder for Black and Hispanic Floridians to register and vote. Chief U.S. District Judge Mark Walker ruled that the law was unconstitutionally intended to discriminate against Black voters. But a three-judge panel of the Atlanta-based 11th U.S. Circuit Court of Appeals this month put Walker’s ruling on hold, meaning the controversial law will almost certainly be kept in place for the 2022 elections.

The Legislature this year passed a measure, championed by DeSantis, expanding the 2021 law and creating a first-of-its-kind Office of Election Crimes and Security in the Department of State to investigate voting irregularities. The law, signed by the governor in April, also made other changes to the state’s elections system.

DeSantis has said that Byrd will ensure the state’s elections will be “run efficiently and transparently” and that the new laws should give Floridians “more confidence” about the voting process.

“We don’t want to change the law and change anything else coming into the election officials. We’ve already put enough on their plate,” Byrd said. “But certainly, after the 2022 election, there will be time to contemplate and see what other improvements we can make.”

In defending the new election crimes office, Byrd said the agency with 15 non-sworn officers will consolidate state and local efforts, similar to how federal terrorism was addressed after the 9/11 attacks.

Byrd indicated that work already may be lined up for the new office, which will be staffed by data analysts and former law enforcement workers, as soon as its director is hired.

“We have potential cases that may be ready once that person, the director, is in place,” he said.