Bobcats blank the Tigers 35-0 at home 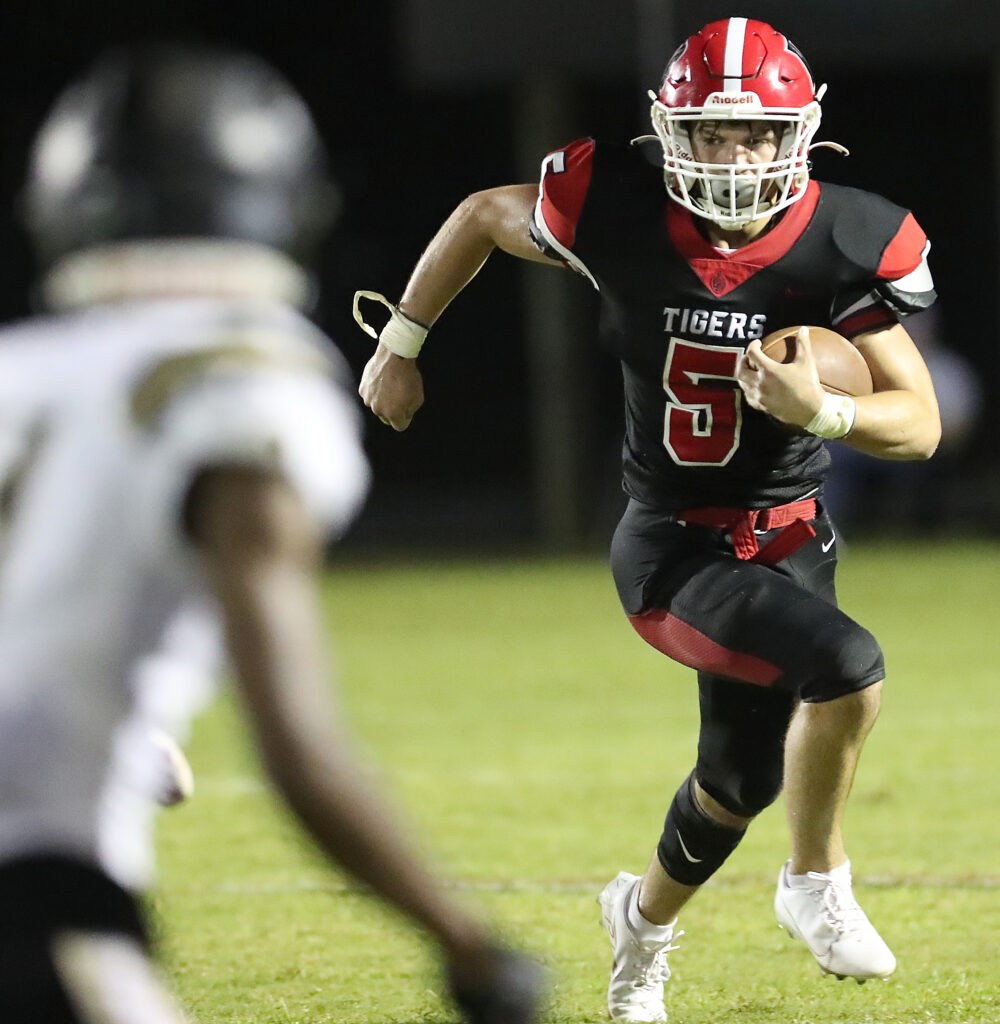 Dunnellon’s Brody Luckey (5) looks for a way around Buchholz defenders during a football game at Dunnellon High School in Dunnellon on Friday. [Bruce Ackerman/Ocala Gazette]

DUNNELLON—Friday night was the story of two football games that weren’t, and the one that was never meant to be.

Originally, the Dunnellon High School football team was scheduled to open its 2021-22 season against the St. Augustine Yellow Jackets at home. But due to COVID-19, St. Augustine was forced to cancel the game.

The Buchholz Bobcats, meanwhile, had the same thing happen to them, when Trinity Catholic, its original opponent and host, had to cancel its game due to COVID protocols as well.

Dunnellon Head Coach Price Harris said he found out about the St. Augustine cancellation at about 10:15 a.m. on Friday—by 10:19 a.m. he was on the phone with the Bobcats’ Head Coach Mark Whittemore.

One look at the scoreboard after four quarters, however, may have had some Dunnellon fans wondering if Harris should have stayed off the phone.

“I don’t regret it,” said Harris of taking the game at the last minure. “We got our butts handed to us but I don’t regret anything because everything’s a learning experience. And that’s a great football team over there.

Buchholz scored on its second and third possessions in the first quarter. Junior Quarterback Creed Whittemore connected with senior Quon Lee for a 53-yard pass touchdown at 7:49.

Little more than two minutes later, Whittemore would hand the ball to junior Amarius Hale for a 10-yard rush TD at 5:18, making the score 14-0 after the extra point at the end of the first quarter.

The Bobcats would score on their first possession of the second quarter. Whittemore would again target Lee, who would score off a 30-yard reception to make it 21-0 with 7:33 remaining in the first half.

About four minutes later, Whittemore hit senior wide-receiver Adrian Sermons in stride for a 20-yard touchdown pass, making it 28-0 at the break.

Dunnellon took possession to open the second half.

Senior quarterback Trent Townsend (6-for-17 passing for a total of 26 yards, 27 yards rushing and one sack) kept the ball on a fake punt on fourth down, gaining 20 yards for the first down.

Despite this effort and how much it looked like the Tigers were about to tilt the field, they would ultimately turnover on downs after the next four plays.

Buchholz scored again with 3:56 remaining in the third quarter—Whittemore to Sermons for a 19-yard pass touchdown—leading to the game’s final tally of 35-0.

Harris acknowledged after the game that after losing 26 starters to graduation his Tiger football team would inevitably have some learning to do as the 2021 season progresses.

But he also acknowledged that it’s really hard to play a team you weren’t prepared to play.

“When you prep for one team all week and suddenly, you’re playing someone else, that’s tough,” said Harris. “That’s all we worked on all week was to play St. Augustine. But playing teams like [Buchholz] is how you get better.

“That’s truthfully what we want every week: a challenge. We’ll get it back. We’ll figure some stuff out and get better. Get ready to roll again [in a few weeks] against [Vanguard],” Harris said.

Another standout player for Dunnellon was senior L.J. Fitzpatrick, who rushed for 22 yards total in the game. Townsend targeted Fitzpatrick three times from the pocket, connecting once for seven yards in the first half.