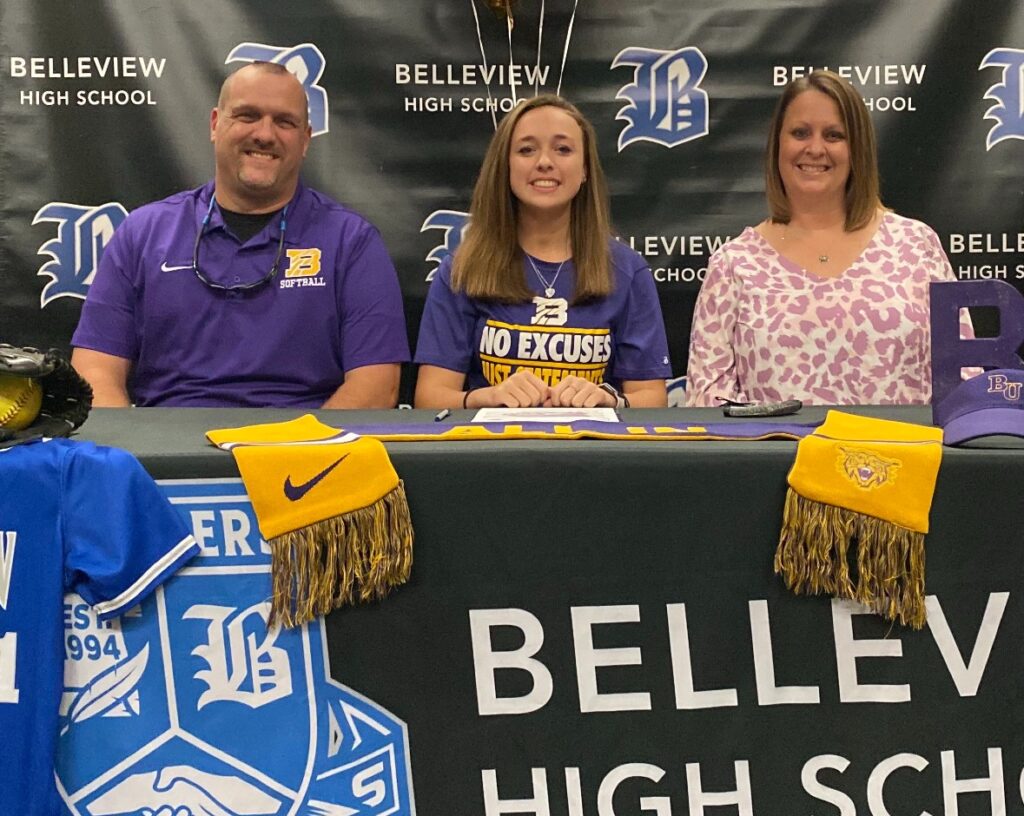 Lauren Reimsnyder, center, smiles after signing a letter of intent to attend Bethel University on Monday. She is accompanied by her parents, Brad and Jennifer Reimsnyder. [Ainslie Lee/Ocala Gazette]

No. 11 became No. 53 on Monday night as Belleview senior Lauren Reimsnyder signed her letter of intent to Bethel University, becoming the 53rd product of Belleview softball to go on to play at the college level.

“This is our favorite time,” Belleview softball’s head coach Gary Greer told the crowd of Reimsnyder’s family and friends. “It doesn’t have a ball or a bat, but is has a celebration of athletes that we’ve had come through Belleview High School. And through the hard work of their own, and through the help of a lot of people in the community, they’re able to move on and play softball and get educated at the next level.”

And Reimsnyder, who will sport the No. 11 for the Rattlers for a final season this spring, is no exception.

Before inking her contract, Reimsnyder gracefully thanked all of the people who impacted her journey to college softball.

From her grandparents, to her cousins, to her late uncle Terry, Reimsnyder’s appreciation to those around her gushed.

“I would like to thank my wonderful teammates from the Belleview Rattlers, and from the Guardians,” Reimsnyder said. “You guys push me every day, and for that, I am forever grateful.”

At the age of seven, Reimsnyder recalls, she decided she wanted to be a softball pitcher. But her dad, Brad Reimsnyder, was quick to caution his daughter about the sacrifices she’d have to make.

“Naturally, he warned me that pitching takes a lot of work and a lot of dedication to do it well,” the Belleview senior said. “But I accepted the challenge.”

In a shortened 2019 season, Reimsnyder pitched relief behind Autumn Oglesby, who graduated last year and hung up her cleats, despite college offers.

With 17.1 innings pitched through 11 games, Reimsnyder, then a junior, struck out nine batters and recorded two saved games.

This spring, Reimsnyder is set to take over the Rattlers’ pitching duties.

Following Belleview’s season, Reimsnyder will make the northward trek to McKenzie, Tennessee, where she will start her college softball career and major in pre-med.