Belleview stars sign with college programs ahead of senior seasons 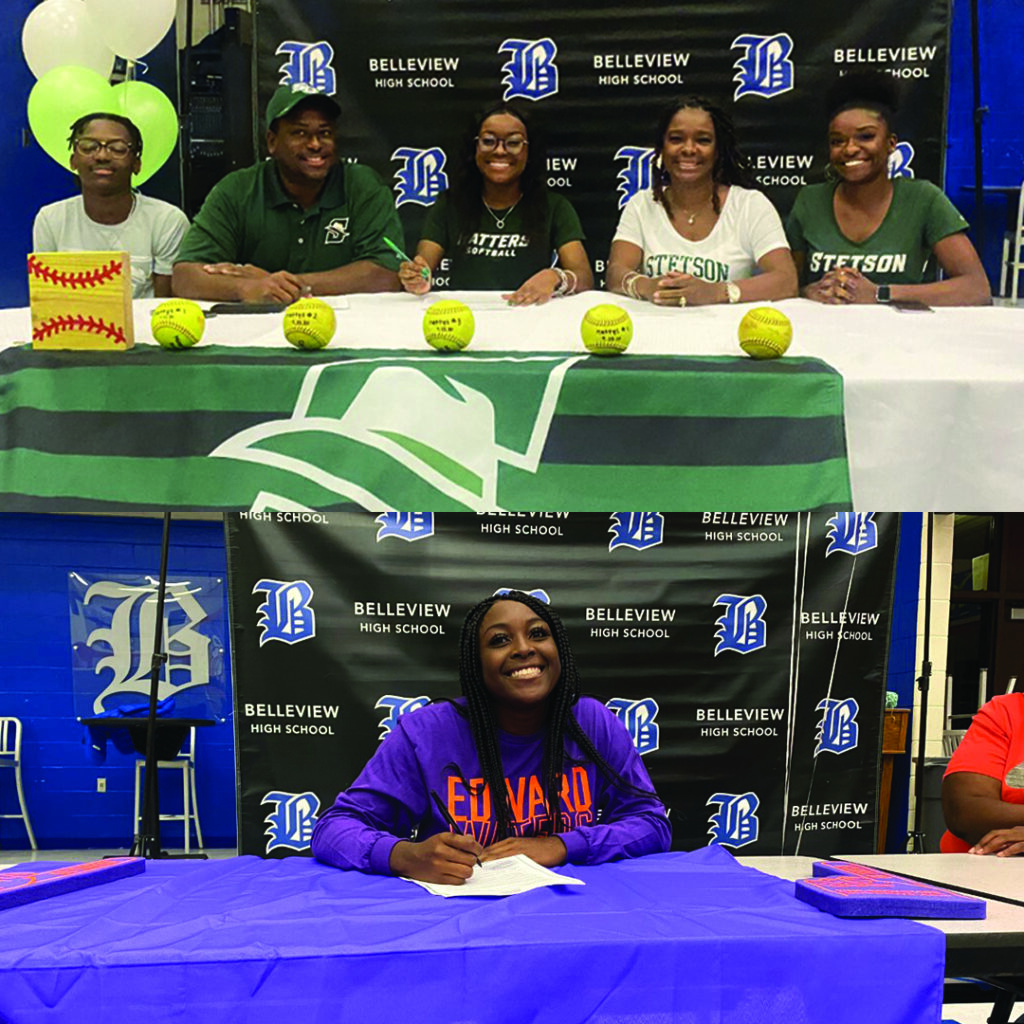 After getting out to an 11-0 start and being regarded as the best team in the State of Florida, Belleview’s softball team was stunned to see their promising season scrapped due to the coronavirus last spring. For many of the Rattlers’ players, it might have felt that they had nothing else to play for, let alone the challenges this would bring to the recruiting front.

Having played only 11 games, was there enough playtime for colleges coaches to scout them? Would there be space on college teams since the NCAA issued everyone an extra year of eligibility? Would they even get recruited?

For Belleview seniors Kylah Gardner and Jaela Haynes, the answers to all those questions were ”yes”.

On December 14, Gardner and Haynes gathered in the cafeteria at Belleview High School alongside their family, friends, teammates and teachers to sign their letters of intent to Edward Waters College and Stetson University, respectively.

Gardner, however, did end up feeling the effects of the global pandemic throughout her recruiting process.

“After the season got cut off because of (Covid-19), I was really unsure about how everything was going to happen,” Gardner said. “And I had an offer that I was kinda negotiating, and it fell through because of Covid and all the players that were coming back for another season. So I was really disgruntled. I was sad. I was hopeless.” 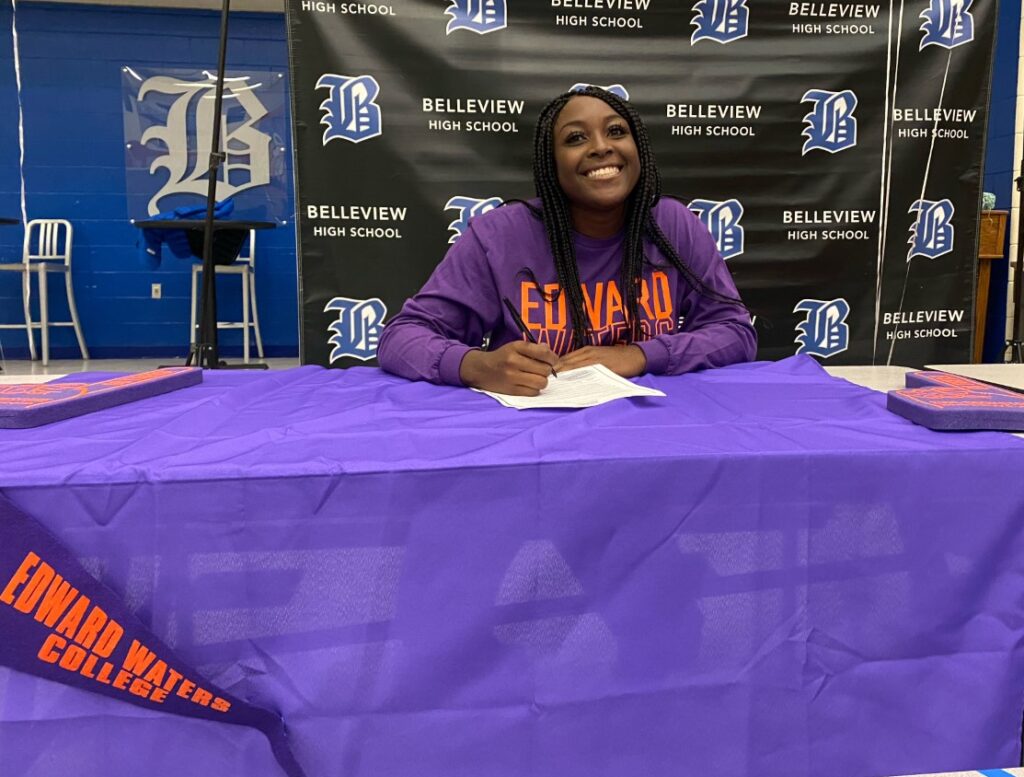 Kylah Gardner signs her national letter of intent to Edward Waters College on Monday evening at the Belleview High School cafeteria. Courtesy of Ainslie Lee, special to the Ocala Gazette

However, fortunately for Gardner, Ya’Asante Tyler, who graduated from Vanguard last year, went on to play softball at Edward Waters and was able to put in a good word for the Belleview star and set up a visit to the Jacksonville campus.

Jacksonville, albeit much different than Gardner’s current home in Belleview, will bring some familiarity as her dad lives nearby.

But what really appealed to Gardner about Edward Waters was the school’s history.

“It’s an HBCU (historically black colleges and universities),” Gardner said. “I think HBCUs like FAMU, Bethune Cookman… they’re all good places. But I feel like that’s a really big culture shock coming from a primarily white institution like Belleview and heading straight there. But Edward Waters is a historic college, it’s really small… there’s only like 1,500 students, so I think I’ll be able to blend well.”

And as excited as Gardner is to return to the softball field this spring for her senior season before making the jump to college play, the Belleview infielder’s focus is elsewhere.

“I’m looking forward to figuring out what my major is going to be,” Gardner laughed. “Maybe joining a few clubs.”

Meanwhile, Gardner’s teammate in Haynes has more direction as she prepares for her next chapter both on the softball field and in the classroom. Haynes’ current plans include studying psychology with law communications.

However, Haynes’ steadfastness comes to no surprise as her father, C.J. Haynes, gave attendees an introspective look into growing up in the Haynes household.

“You’re here today because you bought into our family’s motto: Failure is not an option. Mediocrity is not acceptable,” Haynes’ father said to her.

Haynes’ father went on to gush about his daughter, commending her for her work both on and off the softball field, as well as jokingly comparing her to her older sister, Jasmine Haynes, who went on to play softball at USF after her high school career at Forest. 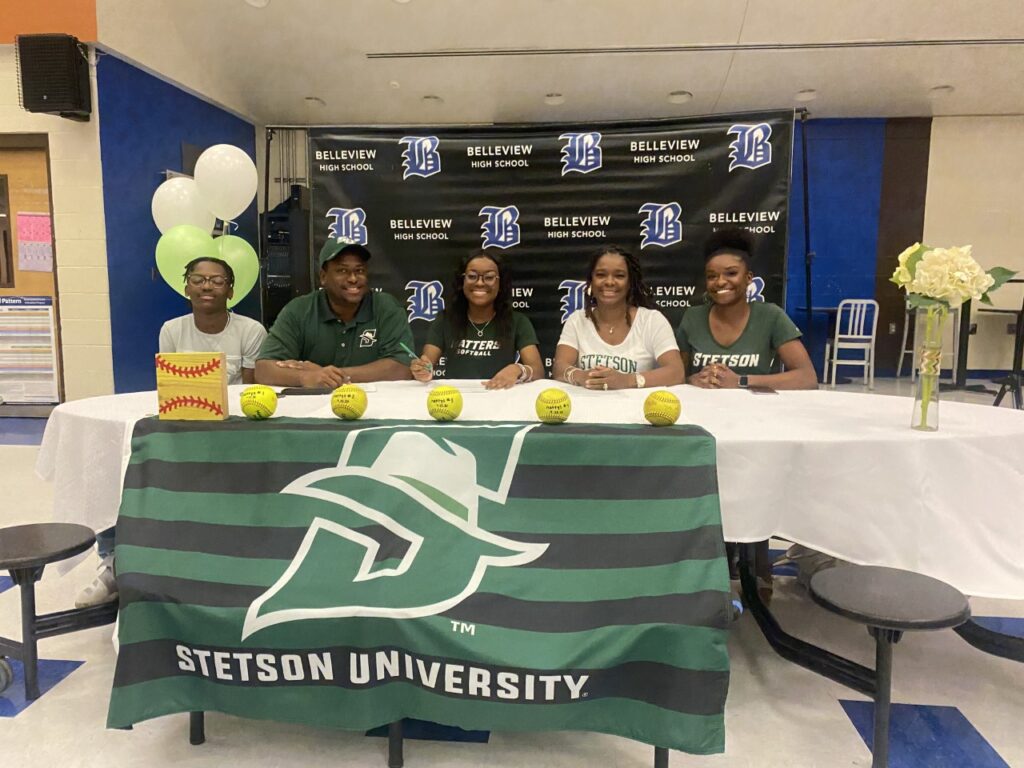 Jaela, too, spent some time at Forest, before transferring over to Belleview for her junior and senior seasons. Crutching on her older sister has been helpful for Haynes through this process.

“I kinda saw what she went through and that’s when I made my decision with Stetson,” Haynes said. “I wanted a coach who was going to bring me in and it felt more like home with the Stetson team.”

When Haynes gets to DeLand and joins the Hatters, who went 12-15 in their shortened 2020 campaign, she understands that as a freshman, her wings might be clipped a little.

“I don’t really expect to come in and start,” the Belleview centerfielder said. “I know I gotta come work hard because there are a lot of outfielders, so I’m going to really have to earn my spot. And that’s something I really haven’t had to do that much.”

Haynes, Gardner and the rest of Belleview’s softball team will look to continue where they left off in 2020 as their season starts in February.