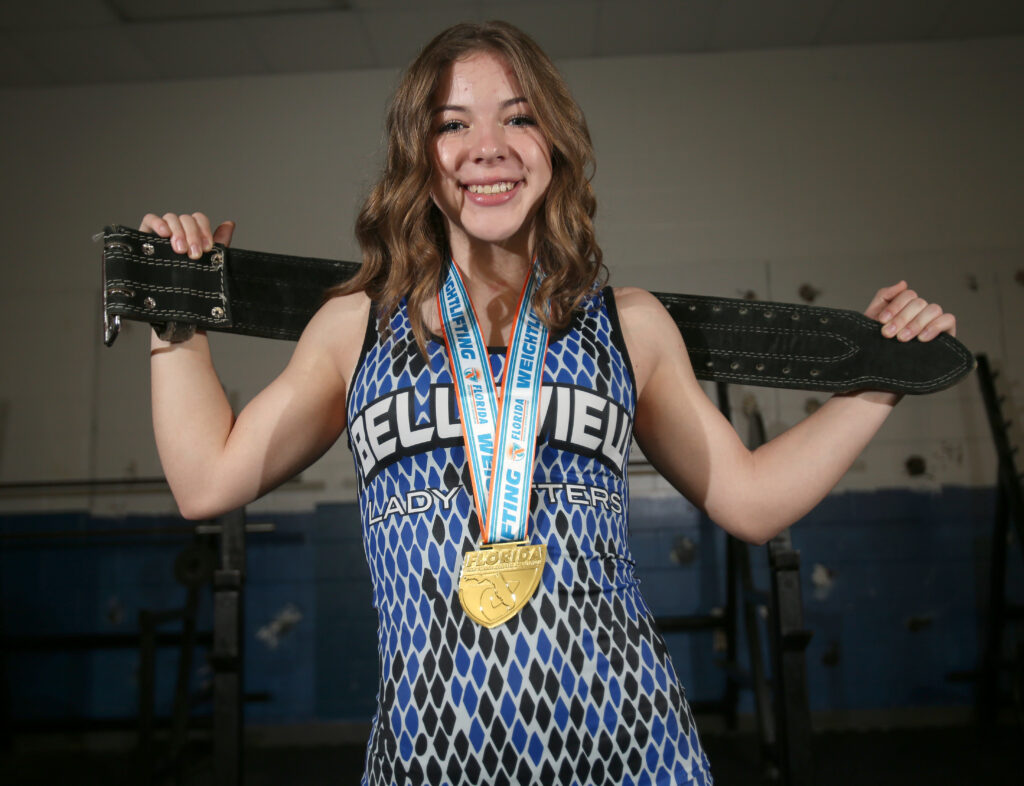 The visit to her father’s grave and the song choice are part of her pre-weightlifting meet routine.

“I just go there, I tell him what I’m doing, where I’m gonna be… we, you know, fist bump and I tell him that I hope I’ll see him there,” Collett says of her visits with her father, who died in 2019.

After all, it was Maury Collett who ignited the weightlifting flame in her at a young age. She started as a little girl practicing form with a broomstick in the kitchen. Then came a smaller, lighter bar, and eventually the real thing – a 45-pound barbell.

Now, in her third year of high school weightlifting, Collett is a state champion.

On Feb. 13 at Suwannee High School, a 106-pound Collett combined for a total lift of 300 pounds – a 145-pound bench press and 155-pound power clean – en route to winning gold for the 110-pound weight class at the FHSAA 2A girl’s weightlifting meet.

During her bench press, Collett looked up at the 145 pounds above her on the rack. She’d never lifted that much before.

“I gotta get it,” Collett remembers thinking to herself.

With Belleview coach Erik Pitts spotting her, Collett lowered the bar and pushed it back off her chest to set a personal best and take the championship.

Pitts, who won a state championship of his own in the 238-pound weight class in 2015, has been a mentor to Collett.

“He is like a brother to me,” Collett said. “He treats me just like my brothers do… Always making fun of me, always pushing me to do better.”

A three-sport athlete for the Rattlers, Collett knew that competing in weightlifting would take commitment and require sacrifices. Competing as a cheerleader and flag football player, however, don’t require cutting weight.

Collett spent most of her season hovering around the 112-pound mark. But by the state meet, she had get down to 106 pounds.

She changed her eating habits but does admit to the less polite tactic of repeatedly spitting in a cup to lose water weight. It’s something often done by wrestlers when ounces count.

“It’s normally just the day that I weigh in and I’ll just do it on the way there,” Collett said.

Despite those challenges, Collett was able to recruit others off the cheerleading team to join the weightlifting team.

“A majority of the weightlifting team is cheerleaders,” Collett said. “I mean everybody has insecurities, but I feel like weightlifting can help with those.”

The Belleview junior has been to the state weightlifting meet each year of her high school career, but this is her first win at the state level.

As a freshman, she placed third before improving to the runner-up as a sophomore. Now, as a champion with a year of eligibility left, Collett is setting a new target.

“I do weightlifting for my dad, so winning states was obviously our top goal” Collett said. “I would love to go and beat some records at state (next year).”

Whatever happens, Collett will still go to Forest Lawn Memory Gardens and talk with her dad. The two will share a fist bump before she climbs back into her car and belts out the chorus to “Roar.”