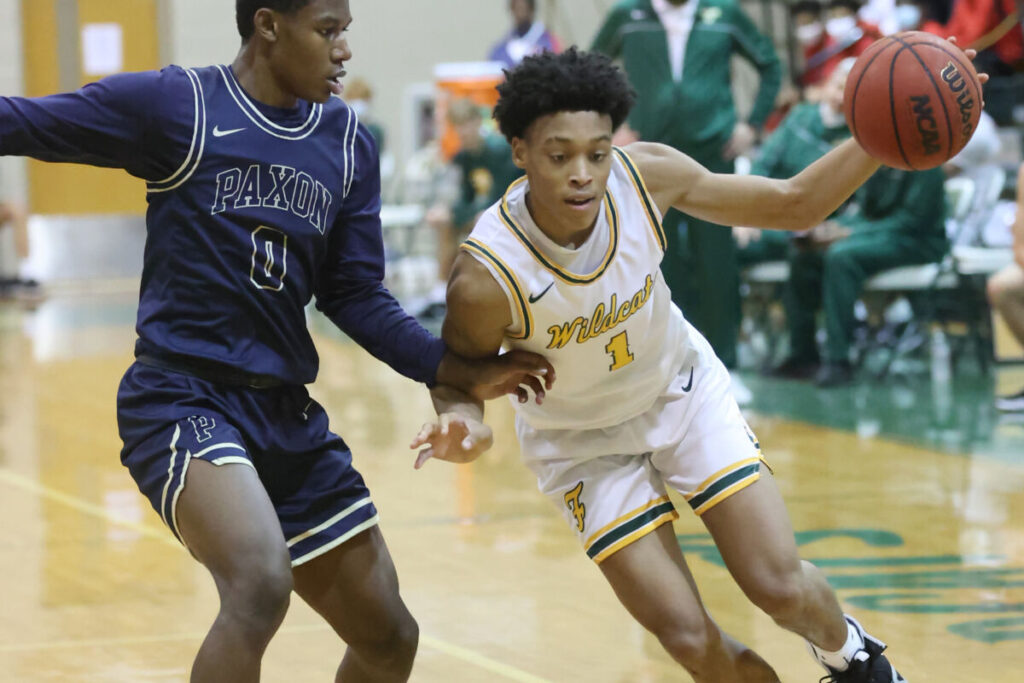 Forest’s Jeremiah Russell (1) drives to the basket as he is defended by Paxon’s Ja’Kobe Williams (0) during the last game of the MLK Classic basketball tournament at Forest High School in Ocala, Fla. on Saturday, Jan. 16, 2021. [Bruce Ackerman/Ocala Gazette] 2021.

Belleview runs away from Chiefland in second half

At 9-3 heading into its game against a 2-10 Chiefland squad, Belleview were massive favorites heading into this game. The Rattlers looked the part for the first quarter, taking a commanding 13-4 lead. But some turnovers and the early 10 a.m. start caught up to them in the second quarter. Chiefland narrowed the lead to 21-15 at halftime.

“We struggled a little bit with turnovers, we’re missing some guys, just like everybody else,” Belleview coach Mike Hoffmann. “But (the) seniors stepped up, talked at halftime to make sure that we came out with energy.”

“Third quarter, we had great energy and finished it on the court with the guys coming off the bench,” Hoffmann said. “It was a good step up for seniors to take over and tell the guys, ‘Hey, we’re better than this and let’s go from here.’”

That was all Dunnellon coach Melissa Mosby wanted to talk about after her team fell apart in the second half against St. Francis Catholic (Gainesville).

The Tigers led by double digits early in the game and ended the first quarter with a 19-5 lead. St. Francis kept pace in the second half, but the Wolves still trailed 35-24 at half.

From there, however, the 6-foot-5 Ashton Lovette and Aidan Newman took over the game for St. Francis. The pair combined for over 50 points in the Wolves’ 61-56 win. St. Francis (6-11) outscored Dunnellon 37-21 in the second half. The Tigers (3-12) just couldn’t stop turning the ball over and failing to convert at the free-throw line as Lovette and Newman made them pay at the other end.

“Free throws killed us,” Mosby said. “We shot the ball 13 for 28 and we lost by five. And then we turned the ball over when they applied pressure.”

The Wolf Pack trailed 19-13 after the first quarter and trimmed the lead to just five points as the teams headed to the locker rooms at halftime with Lake Minneola ahead 31-26. West Port dominated the third quarter, taking a six-point lead heading into the final quarter of play.

However, the Hawks came back to life in the fourth quarter and took the game 61-55 with the help of some clutch free throws at the end of the game. West Port (4-9) outscored Lake Minneola (8-10) 32-20 in the middle two quarters, but the Hawks had the 41-23 advantage in the first and fourth quarters.

“We got to be mentally ready when the game starts, you know, that’s something that’s plagued us all year,”

West Port coach John Bauman said. “(We) just got to get to work on getting in rhythm earlier so we don’t dig ourselves those holes so those runs extend leads instead of making up.”

The Celtics accepted a late invitation to Forest’s MLK Classic on Friday night.

After Forest basketball’s Twitter account tweeted at 4:55 p.m. on Friday night that they had a late cancelation and needed one more team to play in the tournament,the Celtics were scheduled for a 2:30 p.m. tip-off against Wildwood just 30 minutes later.

The Celtics, now 5-8, will visit St. Francis Catholic on Tuesday at 7 p.m.

Heading into the fourth quarter, the Vanguard Knights were looking to reel back from a five-point deficit to the Eustis Panthers.

However, come final whistle, the Panthers had capitalized on their opportunities, and ran away with a 67-54 victory.

For the Knights, senior ace Aaron James dropped 31 points during Saturday’s contest, making for his first 30-point effort of the season. Prior to Saturday, James was averaging 21.8 points per game.

With the loss, the Knights fall to 3-4 on the season and prepare to host Gainesville on Tuesday night at 7:30.

After preparing for Bishop McLaughlin, which had to back out due to COVID-19 concerns, the Forest Wildcats were handed a quick audible when matched up with the Paxon Golden Eagles.

The Golden Eagles, who made a deep run into the playoffs last season, were led by senior Quinnton Jackson with 12 points during Paxon’s 45-41 win over the hosting Wildcats.

Meanwhile, for the Wildcats, junior Brenen Lorient finished the night with 19 points.

“What a day,” Spencer Ashley wrote on Forest basketball’s Twitter page. “Although we fell short to a very good Paxon basketball team, 45-41, I am very proud of ALL of my players who fought to the bitter end. We need to fix some stuff, but these games will make us better in the long run.”

After falling to 10-3 on the year, the Wildcats will host Santa Fe on Tuesday night at 7:30.